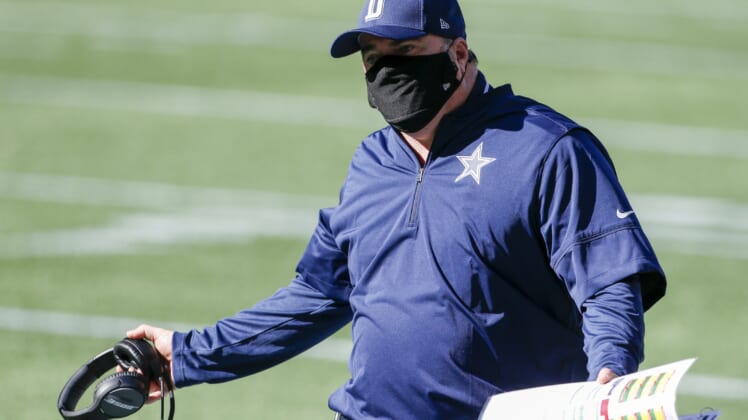 The Dallas Cowboys headed into Week 4’s matchup against the Cleveland Browns having lost two of their first three games under new head coach Mike McCarthy.

Dallas’ only win came via a late-game meltdown by the Atlanta Falcons back in Week 2. Otherwise, it’s been a plethora of issues on both offense and defense that has held this team back.

That came out in droves during Sunday’s pathetic showing against Cleveland. The Cowboys found themselves down 31-14 at the half. Their defense yielded 24 first downs and 333 total yards of offense in the first half alone, including this touchdown pass from Jarvis Landry to Odell Beckham Jr.

Then, to open the third quarter, Dallas gave up a 70-yard touchdown drive in seven plays, culminating in this run by Kareem Hunt.

The end result was one of the most humiliating losses in modern Cowboys franchise history. Cleveland won the game going away by the score of 49-38 after a questionable decision on an onside kick resulted in this Odell Beckham Jr. touchdown run.

Dallas had scored 24 unanswered points in the fourth quarter leading up to that questionable decision from McCarthy. In the end, it cost Dallas an opportunity to pull off one of the biggest comebacks in modern NFL history. It also lends credence to criticism of McCarthy thus far this season.

Historical ineptitude from the Cowboys in Week 4

No, it wasn’t Jason Garrett

There’s this narrative that those in Big D want to throw out there. Former Cowboys head coach Jason Garrett, a symbol of mediocrity during his time in Dallas, was the problem.

Once the Cowboys opted to move on from Garrett and replace him with a Super Bowl-winning head coach in Mike McCarthy, things were naturally going to be restored to order. America’s Team becoming relevant on the broader NFL stage for the first time since Troy Aikman, Emmitt Smith and Michael Irvin were doing their thing.

None of this mentioned issues Dallas has in the secondary and stopping the run. Magically, the addition of Everson Griffen as well as the returns of troubled edge rushers Aldon Smith and Randy Gregory was going to turn this thing around. All the while, playing under a defensive coordinator in Mike Nolan who has been exposed more often than not in recent seasons.

The optimism of America. That type of stuff.

Through four weeks, none of this has come to fruition. A four-time Pro Bowler during his time with the Vikings, Griffen is now on pace for four sacks this season. Fellow Pro Bowler Demarcus Lawrence has done zilch through four weeks. That’s not hyperbole. The expensive edge rusher has exactly zero quarterback hits to his name.

These two are playing under another former 49ers head coach in that of respected defensive line coach Jim Tomsula. For whatever reason, they just have not taken to his scheme. The figureheads here obviously being Nolan and Mr. McCarthy.

The latter part of McCarthy’s tenure with the Green Bay Packers included a rift with quarterback Aaron Rodgers. That was among the biggest stories in Wisconsin after he was fired late in the 2018 NFL season.

McCarthy, also a former 49ers assistant (see a theme here), posted an 11-16-1 record in his final two seasons with the Packers. After winning the Super Bowl back in 2010, Green Bay advanced beyond the divisional round of the playoffs just twice in McCarthy’s final eight seasons.

Cowboys have not been able to return to relevance

Imagine this for a second. Those now old enough to consume adult beverages have no memory of Dallas even competing in the NFC Championship Game. That last happened back in 1995 when quarterback Dak Prescott was just two years old.

In fact, Mike McCarthy was Joe Montana’s quarterbacks coach with the Kansas City Chiefs the last time these Cowboys made a deep run in the playoffs. Montana just celebrated his 64th birthday back in June.

In the span of the 25 years since, the Cowboys have gone from retread head coaches (Bill Parcells and Wade Phillips). The one common equation has been owner Jerry Jones playing the part of general manager while struggling to field a competitive team.

In the end, it’s led to a lack of relevance on the broader NFL stage for the past quarter-century. What we’re seeing thus far this season under first-year head coach Mike McCarthy adds another layer to that.