The Cincinnati Bengals are headed to the AFC Championship Game for the second consecutive year, crushing the Buffalo Bills in the snow. In a game that wasn’t as close as the final score indicated, we learned plenty about both teams moving forward.

A battle between Joe Burrow vs Josh Allen proved to be a little more one-sided than anyone anticipated. Even with a sold-out crowd creating a raucous environment, the Bills’ offense struggled to get anything going for most of the game.

On the other side, Burrow and the Bengals were in firm control throughout Sunday’s action. An early 14-0 lead in the first quarter set the tone. Cincinnati dominated at the line of scrimmage, established its superiority in the quarterback duel and earned its ticket to the AFC Championship Game at Arrowhead Stadium.

Let’s dive into our takeaways from the Buffalo Bills vs Cincinnati Bengals game.

Lou Anarumo needs to be an NFL head coach

There are five NFL head-coaching vacancies and not a single team requested an interview with one of the best defensive play-callers in the NFL. Joe Anarumo has earned an opportunity, with his latest coaching clinic against the Bills’ offense providing more outstanding evidence.

Cincinnati finished 11th in Football Outsiders’ Defense DVOA in the regular season, despite injuries decimating the pass rush and secondary. Incredibly, Anarumo’s group played some of its best football late in the year. From Weeks 9-18, opponents averaged just an 81.7 QB rating with a 59.3% completion rate, 16 sacks and seven interceptions.

Anarumo seems to have Mahomes’ number, too. In the last two meetings against the Bengals, the best quarterback in the NFL has looked mortal. In his last two contests vs Anarumo, Mahomes has a 94.13 QB rating, 0-2 record and a 4-2 TD-INT rate.

Sunday was no different. Allen struggled to get anything going, with the Bengals’ pass rush and confusing defensive looks making him uncomfortable. When the game was out of reach, Allen had just a 75.6 passer rating with 156 net passing yards and a 57.7% completion rate in six drives. If NFL teams won’t interview Anarumo, the Bengals need to be just as thankful to keep him as they are for having Burrow.

Josh Allen must tone down the aggressiveness

Bills fans love Allen’s gunslinger mentality, with a mindset and arm strength that makes him one of the most dangerous quarterbacks in the NFL. He plays with a confidence that allowed him to throw nine touchdowns with a 149.0 QB rating and 77.4% completion rate in the playoffs last season. However, we’ve also seen the downside of that all-gas and no breaks approach.

While Allen entered the season held in similar regard as Patrick Mahomes, he didn’t play like an MVP-caliber quarterback for the majority of the year. In fact, he didn’t even play at an All-Pro level following a hot six-week start.

Far too often, Allen played hero ball. Even when play-caller Ken Dorsey schemed up open receivers crossing over midfield with room to run, Buffalo’s quarterback turned the easy plays down. Instead, he always went downfield (17.1% deep-throw rate, 2nd in NFL) and it cost the Bills plenty of sustained drives and points.

Allen struggled vs pressured on Sunday and he faced a lot if it. Cincinnati generated a 44.4% pressure rate in the first half and it culminated in just 111 passing yards on 17 attempts. He overshot some potentially big throws and ignored easy completions for shot plays. Heading into the offseason, Allen must learn to tone down the aggressiveness playstyle if he wants to hoist the Lombardi Trophy one day.

Joe Burrow is the second-best quarterback in the NFL

The Tom Brady comparisons for Joe Burrow seemed absurd a year ago. While the Bengals’ quarterback proved he could carry Cincinnati on a playoff run, noting similaries to Brady seemed absurd. Now, it doesn’t seem so crazy.

In just his third NFL season, Burrow is already one of the best quarterbacks in crunch time. He finished the regular season with the highest quarterback rating (115.3) in the fourth quarter, combining it with an NFL-leading 8.4% touchdown rate and 70.2% completion rate. Considering how well he performs in pressure-filled moments, it shouldn’t be a surprise that he picked apart one of the NFL’s best defenses even without three starting offensive linemen. 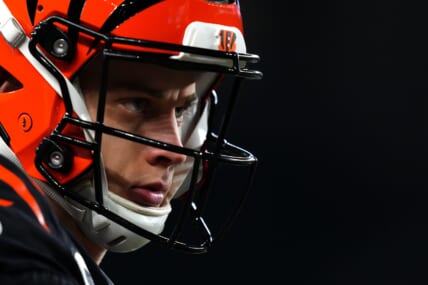 Sunday cemented Burrow’s status as the second-best quarterback in the NFL, only behind Patrick Mahomes. The face of Cincinnati’s franchise posted a 111 QB rating in the first half, throwing two touchdowns with a third dropped by Ja’Marr Chase.

Burrow outplayed Allen in the Divisional Round and it wasn’t particularly close. He also made the big throws in crucial moments, demonstrating why he boasts the highest career completion rate in NFL history. While Mahomes is in his own quarterback club, Burrow now belongs in his own tier.

Sean McDermott and Leslie Frazier will receive a majority of the blame for the Divisional Round loss and much of it is fair. The defense delivered one of its worst performances of the season in the postseason and injuries don’t entirely excuse how this unit performed.

With that said, general manager Brandon Beane must shoulder a lot of responsibility for this loss. He bet on Gabe Davis emerging as a bonafide No. 2 receiver and the plan backfired. Meanwhile, investments into Devin Singletary and James Cook yielded one of the most ineffective rushing offenses in the AFC.

Games can’t rest entirely on Allen’s shoulders. The insufficient supporting cast influences how Buffalo’s quarterback approaches decisions once the football is snapped. If the Bills are going to win their first Super Bowl, Beane must both improve the offensive line and find a playmaker beyond Stefon Diggs. Otherwise, Buffalo will keep repeating the same outcome every January.