Joe Burrow and his Cincinnati Bengals are set to take on the Buffalo Bills in the AFC Divisional Playoffs Sunday afternoon with a ticket to Championship Sunday on the line.

If Cincinnati is able to pull off the road upset in Western New York, it will represent the first time this organization has earned back-to-back AFC Championship Game appearances in the history of the franchise.

All of this comes with Burrow eligible for an extension for the first time once free agency opens in March.

The former No. 1 pick and record-breaking quarterback is going to get paid the big bucks. It’s just a matter of time.

According to NFL Media’s Ian Rapoport, that’s likely to come this offseason. “My understanding is the Cincinnati Bengals are targeting this offseason for a big-time, big-money extension for Joe Burrow,” Rappoport reported on Saturday.

Under NFL rules, players finishing up their third season are eligible for contract extensions. A member of the 2020 NFL Draft class, Burrow qualifies this coming March.

This report is also interesting in that Bengals owner Mike Brown didn’t seem too confident that something would get done during the offseason.

“There is the fact that when you don’t have to pay the quarterback some extraordinary amount, that leaves room to pay other players more and, therefore, you can keep more players that are good players,” Brown on potential Burrow extension earlier in January.

Brown is 100% correct here. Burrow is slated to count a mere $11.52 million against the cap in 2023. Cincinnati will also pick up the fifth-year option on his deal for the 2024 season should the two sides not agree on a massive extension. That figure will come in much lower than what an extension would cost Cincinnati.

The fully-guaranteed $230 million extension Deshaun Watson received from the Cleveland Browns last offseason has been a point of contention around the NFL. Most recently, the Baltimore Ravens have pushed back against offering up a similar deal to Lamar Jackson.

It seems highly unlikely that Cincinnati will do the same thing with Burrow. Brown and Co. have a certain philosophy surrounding extension talks. Despite Burrow’s importance to the franchise, that’s unlikely to change.

As you can see, Burrow is already among the best quarterbacks in the game. He’s led Cincinnati to unprecedented success over the past couple seasons, too. At 26, the best is yet to come. 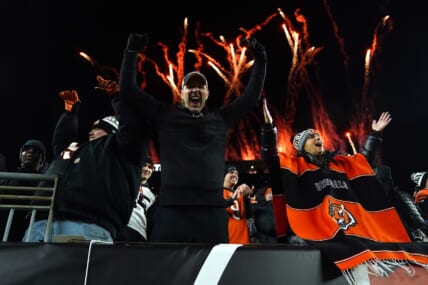 It’s under this guise that we fully expect Burrow to receive an extension that will pay him roughly $50 million annually. The NFL’s quarterback market continues to reset on a near never-ending loop. Aaron Rodgers received that figure from the Green Bay Packers last offseason. There’s no reason to believe Burrow won’t follow suit.