After 18 weeks of regular season play, we’ve finally reached the postseason, where the stakes are even higher. To no surprise, many of the NFL’s top quarterbacks managed to lead their teams to the playoffs. This postseason, we’ll get a glimpse of why organizations place such a premium on landing their franchise QB.

With now just eight quarterbacks left participating in the postseason, we thought it would only be fitting to rank each one. In turn, here are our NFL playoff QB rankings, in reverse, counting back from 8-1.

It’s hard to believe what Brock Purdy has done this season. We have to remind folks that this is a seventh-round rookie who was left for dead during the 2022 NFL Draft. All 32 teams had a chance to pick this QB, yet each one passed him over on multiple occasions.

The San Francisco 49ers finally put an end to his maddening draft day wait, making Purdy Mr. Irrelevant as the last player taken in the draft, and it’s since paid off in an enormous way. Purdy has led his team to seven consecutive wins, throwing 16 TDs to just 4 INTs, but he’s also boosted by a top-notch skill position group that rivals everyone else in football.

We want to see Purdy step up in the playoffs against true contenders before dubbing him the real deal just yet. For now, he’s just another rookie who’s outplaying his draft position, but with even one more postseason win, Purdy may legitly be viewed as a future NFL starter, which is incredible considering how he began his professional football career. 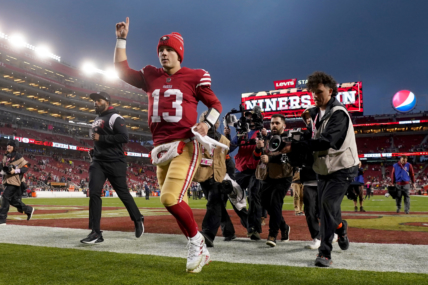 Beginning the season as a ‘bridge quarterback,’ not even Giants fans put their full support behind Daniel Jones at the start of the year. Even the New York organization wasn’t sure what they had in the former sixth overall pick, letting him play the season as a lame duck, set to be a free agent at the end of the year.

But credit to Danny Dimes, who fully bought into the coaching he’s received from Brian Daboll and Mike Kafka, which led to a drastic reduction in turnovers and thus, a giant boost in the win column. Jones fumbled an NFL-high 19 times as a rookie and just six times this past season, ending with the lowest interception rate in football.

What’s more, Jones may not be the most polished athlete yet, and he’s held back by the worst group of receivers among playoff teams, but the total package he offers by being able to make plays with his legs makes the Giants QB a true threat on gameday.

We saw that on full display in the Wild Card round, where he became the first QB to pass for 300 yards plus two touchdowns while also adding 70 yards on the ground. But this was against the second-worst pass defense in football. It’s likely to be a much different story when taking on the best-passing defense in the NFL next.

Related: Daniel Jones’ performance will force the Giants to shell out a large contract

Dak Prescott cost himself a spot or two in our NFL playoff QB rankings due to his recent poor play during the regular season, which has been riddled with turnovers. Once viewed as an elite quarterback, Prescott’s value was arguably at an all-time low as the Cowboys entered the playoffs.

It’s not exactly ideal for a team with a great amount of pressure placed upon themselves, but Prescott somehow managed to throw 11 interceptions in his past seven starts, finishing with an NFL high number of picks thrown. Finishing with a career-worst 37% completion rate in the regular season finale, Prescott was in need of a sharp turnaround in the Wild Card round.

But Prescott deserves credit for slicing up the Buccaneers’ defense to the tune of 305 yards, with four touchdowns while completing 75% of his passes against what ranked as the ninth-best pass D. But beating the 49ers, who allow the fewest points in football won’t be so easy.

The late stretch of the season saw Trevor Lawrence live up to the potential the Jaguars saw in the No. 1 overall pick from the 2021 NFL Draft. He helped take the Jags from worst to first in the AFC South and in turn, raised the profile of several of his receivers, helping Christian Kirk reach 1,000 yards while also helping Evan Engram return to being the playmaking tight end he was drafted to be.

Lawrence is always calm and cool, no matter the situation he’s placed in, and even if he finds himself stuck in a muddy pocket, the 23-year-old QB is learning when to use his legs to escape or dump it off to his checkdowns. We’re seeing enormous growth from Lawrence, and that just may continue in the postseason. If leading the third-largest comeback in playoff history was any indication, Lawrence could put up a serious fight in Kansas City.

If Josh Allen is the best dual-threat QB in football thanks to an otherworldly arm and a fearless ability to scramble, then Jalen Hurts is the best-combined dual-threat QB who looks to pass first, yet still can rack up 1,000 yards on the ground. It doesn’t make much sense, we know, but there is a difference.

While the Bills win by dropping deep bombs thanks to a potent air attack, the Eagles prefer to eliminate opponents with their efficient running game, and Hurts operates coach Nick Sirianni’s offense to perfection. Who says you need to win in the modern NFL by having a top passing offense? Hurts showed that having a top-five rushing offense can still lead to scoring the third-most points in football, yet when he’s asked to pass, Hurts doesn’t make mistakes.

You can try and take away Hurts’ ability to scramble, but he’s proven he’s arguably just as dangerous when dropping back to pass. It’s essentially a pick-your-poison situation, and the Eagles, who boast the top seed in the NFC, are fully armed with a dangerous weapon at the QB position.

Sure, Mahomes and Allen take the top two spots, but let’s be honest, Joe Burrow isn’t far behind. He entered the postseason on a hot streak, scoring 20 touchdowns in his last eight games, all wins. Burrow is armed with what may be the best group of skill position players in the NFL, and he’s shown time and time again that if his receivers get open, Burrow will find them.

Yet, what’s amazing about Burrow’s aggressiveness is that he also ranks second among quarterbacks in completion rate. Sometimes him holding onto the ball, searching for an explosive play will cost him, and it’s led to 41 sacks this season, sixth-most among QBs. Still, Burrow is always a threat to go off for a 400-yard game, especially with Ja’Marr Chase by his side. 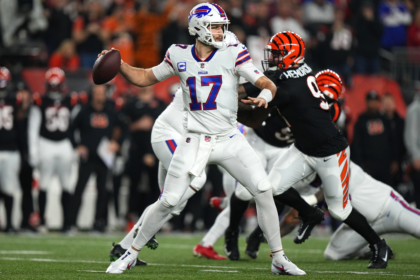 Also Read:
AFC Divisional Playoffs: Joe Burrow vs Josh Allen, a look at who has the advantage

While others may be better as a pure passer, there is no better dual-threat QB in football than Josh Allen. In some ways, the Buffalo QB is a triple threat. Not only can he throw as far as anyone on this list and move the chains with his athleticism, Allen also isn’t afraid to lower his shoulder and run through defenders at the goal line.

At his best, Allen rivals the top quarterbacks in football. Yet, as we’ve seen this season, there are also times when the 26-year-old QB tries to do too much, leading to redzone interceptions. While Burrow may offer more from a passing perspective, what Allen does with his group of receivers is arguably much more impressive. 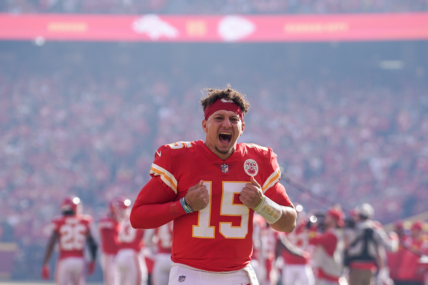 After finishing the season with 500 more passing yards and six more passing touchdowns than anyone else while also leading his team to the top seed in the AFC, how can anyone place another QB ahead of Patrick Mahomes? It wouldn’t be fair. Keep in mind Mahomes put up these video game numbers without the electric Tyreek Hill burning defenders 50 yards downfield.

The obvious MVP winner, Mahomes is the top player in our NFL playoff QB rankings, where he’s the only QB remaining to have won a Super Bowl ring. Boasting the top-scoring offense in football, expect Mahomes to be dialed in during the postseason.