The Dallas Cowboys have their first road playoff win since 1993 and are celebrating their first victory over Tom Brady. On a night when jobs were on the line, Dak Prescott delivered a performance for the ages.

Dallas only needed three quarters to decide this highly-anticipated playoff clash. Even on a night when Brett Maher made some unfortunate NFL history, the Cowboys’ offense and defense put a sluggish end to the regular season behind them with one of their best all-around performances of the year.

Monday night wasn’t as nice for Brady and the Buccaneers. An 8-9 team that many believed didn’t deserve to be hosting a playoff game performed like a sub-.500 club. In what might’ve been Brady’s last game in the NFL and certainly is last in a Buccaneers’ uniform, Tampa Bay fell flat again.

Let’s dive into the winners and losers from the Dallas Cowboys playoff victory over the Tampa Bay Buccaneers.

There were fans calling for Cooper Rush just a few weeks ago. Frustration is understandable, Prescott’s sporadic play to close out the regular season was awful. From Weeks 12-18, he posted a 15-11 TD-INT line with an 88 QB rating and four fumbles. This performance is. why Prescott is one of the highest-paid quarterbacks in the NFL.

Prescott also set the Cowboys’ postseason record for consecutive completions (11), picking Tampa Bay’s secondary apart. On the road with his coach’s job on the line, Prescott accounted for 329 yards of offense and five touchdowns. We shouldn’t hear about Rush again.

Loser: Tom Brady proves age catches up to us all

Father Time is undefeated. It came for Tom Brady far later than anyone expected, he outran it for nearly a decade. This is the greatest quarterback in NFL history, one of the best postseason performers in the history of sports and his legacy will never be matched. But Father Time does not lose, it catches everyone. 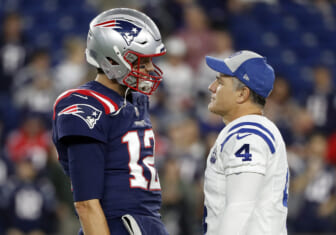 Brady wasn’t an elite quarterback this season. He finished the regular season with the 14th-highest rate of bad throws (16.4%), ranked 18th in ESPN QBR (52.5) and he had one of the worst quarterback ratings (44.4) when pressured this season.

We largely saw that version of Brady. Yes, the Tampa Bay Buccaneers’ offense has been a problem all year. But Brady chose this team and after so many years of doing the unbelievable, he never uplifted this offense. Brady was shut out in the first half for only the second time in his playoff career, 48 games over two decades. It sums up Brady’s greatness and his final season in Tampa.

Dallas placed the franchise tag on Dalton Schultz, giving him a fully-guaranteed contract because it ensured he would be back in 2022. The Cowboys knew how important Schultz is to Prescott, with Monday’s game alone making him worth every dollar of that tag.

Tampa Bay never had an answer for him. He led the team in receiving yards (95) and receptions (seven), making big plays in the end zone and a juggling catch down the sideline. Following this career-best performance, Schultz will become one of the highest-paid tight ends in the NFL.

On a night when so many things went right for the Cowboys, Brett Maher arguably had the worst day of his life. It also came out of nowhere. Maher finished the regular season with the third-most points scored (137) and converted 50-of-53 extra-point attempts in the regular season. 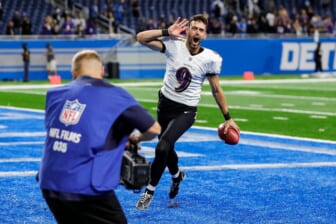 He set an NFL playoff record with three missed extra points before halftime. Maher’s teammates expressed their frustration and disbelief on the sideline and everyone expected that to be his last attempt of the night. Five minutes into the third quarter, Maher became the first kicker since at least 1950 to miss four extra points in a single game.

Fortunately for Maher, the Cowboys won the game and his season-long performance might save his job. If Prescott didn’t dominate on the big stage, though, Maher would be in some infamous sports company.

If you want to know why multiple NFL teams are interested in hiring Dan Quinn as their head coach, after what transpired with the Atlanta Falcons, look at this game. The Dallas Cowboys’ defensive coordinator is beloved by players, providing leadership and teaching that is rare to find. He is also a maestro when it comes to putting together a defensive game plan and executing it.

Quite frankly, Dallas needs to win it all this year. There’s a compelling argument to be made that Quinn is the most important person on the Cowboys’ coaching staff and the Denver Broncos want him. With Jim Harbaugh heading back to Michigan and Sean Payton only 50-50 on an NFL return, Denver could quickly make Quinn its No.1 target.