Chicago Bears fans want Justin Fields to be their starting quarterback. They are also apparently taking out their frustration on presumed starter Andy Dalton.

All of this came to a head during a blowout home loss to Mitchell Trubisky and the Buffalo Bills Saturday. Dalton played throughout the first half of the ugly 41-15 loss. Fields didn’t see action until Chicago’s second and third team offensive line was on the field.

With Dalton playing, fans at Soldier Field were heard chanting Justin Fields’ name. They also booed the veteran quarterback throughout his time on the field.

Fields took note in talking with the media one day later. To say that he wasn’t happy with Bears fans would be an understatement.

“I noticed it, of course. The fans are awesome, but they also have to realize Andy is a human being too,” Fields said, via Pro Football Talk. “Andy is out there on the field right now, so I really think it’s kind of disrespectful to Andy, them cheering my name like that. They have to trust in coach to make sure he’s making the right decisions and cheer Andy on. That’s not helping Andy play better, them cheering my name. That’s not doing that. So I would say my advice to them would be just cheer for who’s out there playing on the field.”

That’s definitely some maturity on the part of Fields. However, his point that Chicago Bears fans must trust head coach Matt Nagy holds no real weight.

Nagy and general manager Ryan Pace are clearly on the hot seat after fumbling the quarterback situation over the past several years. To see Trubisky come into Chicago and ball out adds another layer to the entire situation. 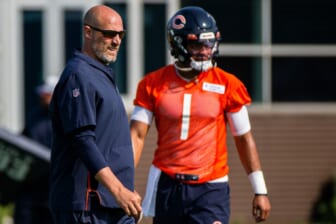 With Justin Fields playing behind backup offensive linemen on Saturday, he was blasted over and over again. He also struggled to do anything of significance, leading to speculation that Nagy is already setting the stud young quarterback up to fail.

This isn’t a zero-sum game. Nagy has a history. Bears fans know full well that it’s not a good history surrounding the quarterback position.

As the likes of Mac Jones and Trey Lance continue to ball out, Fields’ performance in Chicago has had some mixed reviews. He played exceedingly well in his NFL preseason debut before falling victim to the circumstances brought on by Nagy’s inept coaching on Saturday.

Sure the youngster wants to be a good teammate. He couldn’t have liked what he heard from Bears fans at Soldier Field. With that said, most of this is on Nagy.