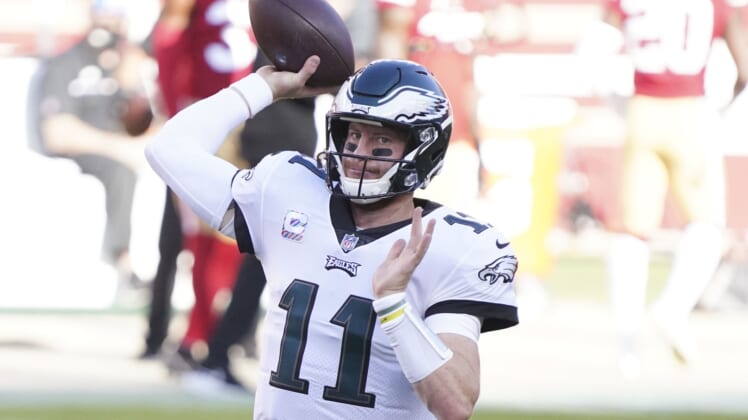 Carson Wentz got his wish and was traded from the Philadelphia Eagles to the Indianapolis Colts on Thursday, and he took to Instagram Friday night to bid farewell to the city.

Although Wentz did thank his teammates, fans and the franchise’s leadership, that order in which he did it subtly implied that his time with the Eagles organization indeed did not end well.

Wentz reportedly ignored coaching from now-fired Philadelphia coach Doug Pederson throughout last season, and generally had a horrible 2020 campaign. He was benched in favor of rookie second-rounder Jalen Hurts.

Thus, it’s no surprise Wentz was most grateful to his teammates and the fans first before getting around to the team of Eagles leaders who’d brought him aboard in the first place. Among that contingent, although omitted in his farewell address, was Frank Reich.

The Colts believe Wentz can get back on track. Reich was the Eagles’ offensive coordinator at the start of the signal-caller’s career and is now the head coach in Indy. He clearly had a lot to do with imploring Colts general manager Chris Ballard to pull the trigger on the Wentz trade.

Both the Eagles and Wentz were in dire need of a fresh start. That much was apparent. How will Wentz be remembered in Philadelphia, though?

Right now there are a lot of hard feelings, and Philly fans are among the most unforgiving bunch there is in major professional sports. Wentz got destroyed, and rightly so, for how poor his play was this past season.

Just the year before, Wentz lifted an underwhelming cast of skill players to an NFC East title. Unfortunately, as has happened throughout Wentz’s otherwise fairly strong, young career, another injury befell him in the playoffs, where he’s been unable to prove himself to date because of health issues.

Without Wentz, the Eagles wouldn’t have started 11-2 in 2017 before he went down with a major knee injury, only to see Nick Foles step in and lead Philadelphia to a Super Bowl LII win over the New England Patriots and earn the Big Game’s MVP honors. Foles spelled an injured Wentz for the next postseason and won another start.

Some of the problems the gifted 28-year-old has had stem from holding the ball too long and taking unnecessary hits. It was precisely this flaw that ended another highly touted quarterback’s career early. His name is Andrew Luck.

In going to the Colts, Wentz is hoping to be Luck’s long-term successor. The familiarity factor with Reich can’t be downplayed, nor can the fact that Indianapolis has a much better offensive line, which ranked seventh in Pro Football Focus‘ final 2020 rankings.

All those factors, plus the presence of Jonathan Taylor in the backfield, bode well for Wentz to have a massive bounce-back 2021 season — and help the Colts earn a playoff berth for the second straight year.

On the other hand, with Ryan Tannehill already in Tennessee, Deshaun Watson in Houston (for now) and Trevor Lawrence about to be drafted first overall by the Jacksonville Jaguars, could a fair argument be made that Indianapolis still may have the worst quarterback in its division this coming season?

Interesting food for thought. Wentz certainly has demonstrated the talent to play winning, MVP-caliber football before. Let’s see if Reich can get it out of him.