The Bobby Wagner contract news last week was a notable splash in the free-agent market for the defending champion Los Angeles Rams. Despite having limitations on the money they could spend after winning Super Bowl LVI, the team was able to make a major move in the mercenary market. However, the $50 million deal they gave the former Seattle Seahawks star is another classic example of an NFL contract based around early guarantees and no long-term promises.

The Seattle Seahawks’ decision to cut their eight-time Pro Bowler was a surprising turn of events in 2022 NFL free agent. All of a sudden a six-time All-Pro, still in their prime, was on the market and available to the highest bidder. Few expected Wagner to stay on that way for long, and eventually, his free-agent run ended on March 31. However, the Rams being the team to win the race was a bit surprising.

The Los Angeles Rams mortgaged a great deal of salary cap space and future draft picks to earn the franchise’s second title in February and keep much of its core together and happy. Which should have made it very difficult for them to add a player the level of Wagner. Yet they gave the 31-year-old star a five-year deal worth upwards of $50 million. A stunning number when you consider they just gave quarterback Matthew Stafford an extension and are working on another with superstar defensive lineman Aaron Donald. Which is sure to be historic for the position.

However, the Bobby Wagner contract follows the tradition of big contracts dealt out in the past and even during this year’s free agency period (see: Miller, Von). The deal is built around paying big bucks to win now but making no promises after the first two years.

On Monday, NFL Network league insider Ian Rapoport reported the details of pact between Wagner and the Rams. While the contract can last as long as five years and reach as high as $50 million, the deal essentially is a two-year deal worth $17.5 million when it comes to guarantees. And there are incentives that could see Wagner earn up to $23.5 million over that time as well.

Wagner will earn $6.5 million as a base salary in the first year, with $10 million guaranteed in total. NFL Network reporter Mike Garafolo confirmed a $3.5 million roster bonus next spring is the money that will bring his first-year salary up to $10 million.

After that season-one money and another close to $8 million he will likely get in year two, the Rams aren’t on the hook for any more guaranteed money to their big-ticket free-agent addition. Which gives them a two-year window to max out on the dastardly combo Donald and Wagner should be for NFC West offenses over the next two years. 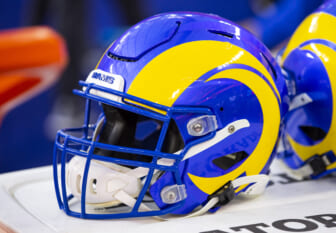