Los Angeles Rams fans can rest easy because a new Aaron Donald contract is currently being hammered out to ensure his return in 2022.

Following the team’s victory at Super Bowl LVI, there was some uncertainty about the three-time defensive player of the year’s future in the NFL. Rumors swirled before the big game that if the Rams were to win the Lombardi Trophy, Donald very well could call it a career at only 30-years-old. Well, the team won the NFL title and the wait began for a decision from the 280-pound superstar.

Months have passed since the Super Bowl and there is still no answer to the question of Donald’s future in Los Angeles. However, that changed in a major way on Tuesday when Rams head coach Sean McVay acknowledged to reporters during a press conference at the annual league meeting that the seven-time All-Pro would be back in action for the team next season.

After the team’s championship win in January, Donald claimed the key in his return would be for the team to bring back key free agents in Von Miller and Odell Beckham, Jr. While that certainly would be a perfect scenario, most NFL observers believe the eight-time Pro Bowler getting a contract extension and raise on the deal he has well outplayed would be the main force behind his return.

During his press conference, McVay revealed an Aaron Donald contract extension is being worked on right now, and that his best player was deserving of an increase on the six-year, $135 million contract he signed in 2018.

“Well it’s a huge priority for us. I know that our group is working with [Donald’s agent] Todd France and trying to get that figured out,” McVay said. “Feel really good about Aaron’s excitement about coming back and continuing to lead the way for us. But that is a piece that we do want to be able to get figured out for him. And I think he’s deserving of it. And so, we’re in the process of working through that right now.” 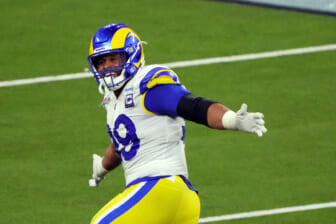 Bringing back the best defensive player on the planet while he still has prime years left is of utmost importance for the franchise for next year and beyond. The window to win Super Bowls and stack up billions in revenue can be short, and Donald is a major factor in the Rams staying in the hunt for all of the above in the next three years.