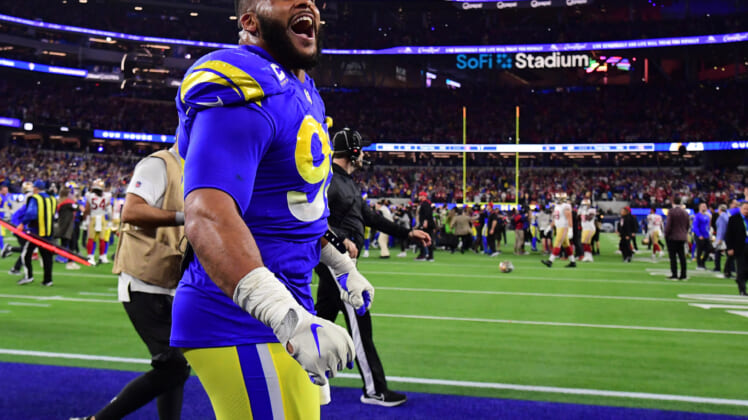 Los Angeles Rams defensive lineman Aaron Donald will go down as one of the best defensive players of his generation regardless of Sunday’s result. But if the Rams win Super Bowl LVI, the All-Pro lineman could reportedly retire.

During an appearance on NBC’s pre-game coverage, former NFL player Rodney Harrison was asked about the impact Donald will have on Sunday’s game. However, he surprised everyone by disclosing that Donald apparently told him walking away from the NFL is seriously on the table if the Rams are Super Bowl champions.

“He also told me this. If he wins a Super Bowl, there is a strong possibility that he can walk away from the game and retire.”

The No. 13 pick in the 2014 NFL Draft, Donald has been one of the best NFL players since he entered the league. A three-time Defensive Player of the Year award winner and a seven-time first-team All-Pro selection, the 6-foot-1 tackle has dominated opponents for years.

However, the physicality of football has reportedly taken a toll on the 30-year-old. With a wife and a young family, Donald could walk away from the NFL on top as a Super Bowl champion if the Rams win on Sunday. He would also be guaranteed a spot in the Pro Football Hall of Fame, joining a legendary 2027 class alongside Ben Roethlisberger and Tom Brady.