The Los Angeles Rams stood atop the NFL world on February 13 at Super Bowl LVI, as the champions of the 2022 season. They spent boatloads of cash and mortgaged much of their future, but in the end, they achieved the goal and secured the franchise’s second Lombardi Trophy — and first in LA.

As the defending champs, this year’s installment of the draft would seem mostly ceremonial. That’s especially true when you consider the team has no reason to attend the first day of the draft after trading their first pick for quarterback Matthew Stafford and a second and third for Von Miller last season. They could also show up late on day two because they won’t make a pick until the third round (104th overall).

However, in a league where Pro Bowlers and even legends can be discovered late in the draft, and a salary cap that forces constant change to NFL rosters, Los Angeles needs to take the event seriously and try to find some sleepers on the final days with their six picks in the fifth round and beyond. Let’s take a look at when the Los Angeles Rams will make their eight selections in the 2022 NFL draft.

Los Angeles Rams mock draft: Depth will be the name of the game

For a team that just won a championship, it is not easy to point out a bunch of flaws and areas that need major upgrades. However, the Rams were far from perfect and have some weaknesses that require improvements if they want to repeat next season. That’s pretty scary for a franchise that is currently the best in the game.

Last season, the offense was led by Matthew Stafford and the passing game. Cooper Kupp was an absolutely dominant force and nearly accumulated 2,000 yards receiving. Van Jefferson chipped in as a solid WR2 for a time, until Odell Beckham Jr. joined the team late in the season and recaptured some of his former greatness. However, the running game was mostly serviceable throughout the season. The RB by committee duo of Sony Michel and Darrell Henderson, Jr. was solid in its role, but doesn’t have serious upside.

The team could use a player with run game upside but a passing game lean. The defense could also use some depth in the secondary and they should aim to find a long-term pass-rushing project to develop because you can never have enough of those. Especially after they lost Von Miller in free agency.

Let’s take a look at some possible options for the team’s third, fourth, and fifth-round picks.

At 6-foot-4 and 265 pounds, Sam Williams has the build of a high-level pass rusher in the NFL. The explosiveness that helped him to earn 12.5 sacks last season at Ole Miss was on full display when he wowed talent evaluators with a 4.46 40-yard dash time at this year’s combine. The native of Alabama took a major step forward in his third season and is a talent that could certainly be molded into a long-term quarterback hound to fill the void left by the departure of Von Miller.

Related: 10 players who could be traded during the 2022 NFL Draft

Western Kentucky defensive end DeAngelo Malone is a talented pass rusher that should be available in the fourth round. Last season he tallied 94 tackles, nine sacks, and four forced fumbles for the Hilltoppers. In 2019, he had 100 tackles and 11.5 sacks.

At 6-foot-3 and 234 pounds, he is a bit undersized as a lineman for the NFL. This means that he could be moved to outside linebacker at the next level. Nevertheless, he is a proven pass rusher that has a nose for the ball as a talented tackler. This could make a position change in the NFL that much easier of a transition.

Baylor’s Abram Smith did not play a great deal in his first two seasons, but in year three he absolutely exploded to the tune of a 6.2 yards per carry average and 1,601 yards on the ground. However, that is part of the problem with Smith. Was 2021 a show of the immense upside he has or an aberration? At the very least, he projects to be a contributor as a backup and on special teams. However, considering the numbers he put up last season, he could be a savvy selection with the team’s fifth-round pick. 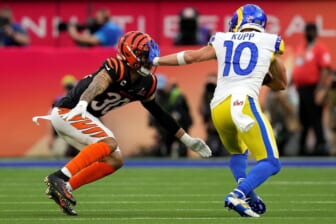 After the first five rounds of the draft, the Rams can continue to add more depth to their defense and look to improve on special teams with their five picks in the final two rounds. Here are the best value selections for LA at the end of day three.