The Denver Broncos have traded All-Pro edge rusher Von Miller to the Los Angeles Rams in a blockbuster deal just one day before the 2021 NFL trade deadline.

Miller, the No. 2 pick in the 2011 NFL Draft, spent is entire career as the Broncos’ defensive star before Monday’s trade. In the final year of his contract, Miller joins a Rams defense with Jalen Ramsey and Aaron Donald.

ESPN”s Adam Schefter reported Monday’s blockbuster trade. According to Ryan O’Halloran of The Denver Post, Denver will receiver the Rams’ second- and third-round picks in the 2022 NFL Draft.

While Miller is no longer playing at the level that earned him first-team All-Pro honors three times (2012, 2015, 2016), the 32-year-old remains an outstanding pass rusher.

Coming out of Week 8, per Pro Football Focus, Miller was credited with 28 total pressures, 19 quarterback hurries and a 78.2 pass-rush grade. Joining a front seven with Donald, Miller will have an opportunity to record his first double-digit sack season since 2018. 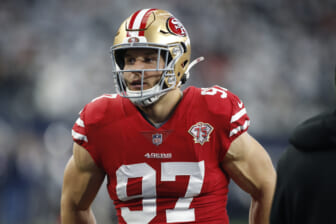