Rams WR Cooper Kupp not looking to be top-paid wideout 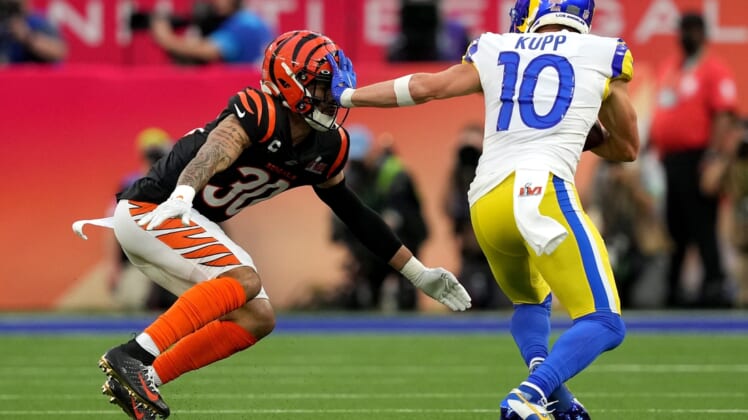 Cooper Kupp may have been the most productive receiver in the NFL last season, but he says he isn’t looking to be the highest paid.

The Super Bowl MVP is in the midst of contract extension negotiations with the Los Angeles Rams at a time in which the receiver market has exploded.

Davante Adams set a new high with a contract averaging $28.5 million per season when the Las Vegas Raiders acquired him from the Green Bay Packers in mid-March. Less than a week later, Tyreek Hill topped that with a $30 million average after he was traded by the Kansas City Chiefs to the Miami Dolphins.

“I don’t think that’s really kind of the approach that I take,” Kupp told reporters Tuesday after a voluntary team workout. “I definitely think there’s a place you want to be. There’s a place that you feel like is fair. A place for me and for this organization.

Kupp is in line for a big raise after putting together one of the top receiving seasons in NFL history.

The 28-year-old Kupp became the fourth player since the AFL-NFL merger to win the receiving triple crown, leading the league in receptions (145), receiving yardage (1,947) and touchdown catches (16). The others are the San Francisco 49ers’ Jerry Rice in 1990, the Green Bay Packers’ Sterling Sharpe in 1992 and the Carolina Panthers’ Steve Smith in 2005.

Kupp also caught two touchdowns in the Super Bowl, the latter one for the winning score with 1:25 to play as the Rams defeated the Cincinnati Bengals 23-20.

Los Angeles coach Sean McVay said the organization has had “good dialogue” with both Kupp and star defensive tackle Aaron Donald in terms of getting extensions done.