Some were surprised that the Buffalo Bills gave 33-year-old Von Miller a six-year deal worth $120 million. However, when you look deeper into the details of the contract, it is just another example of an NFL pact filled with promises but only half the guarantees.

Despite having close to 200 NFL games (regular season and playoffs) on his body heading into free agency, the two-time Super Bowl champion was actually a sought-after pass-rushing mercenary on the open market. Even ranking fourth in our list of the top 200 best available players this offseason.

Von Miller entered the offseason a well-aged but valuable commodity

All sorts of rumors were swirling about where he could land for the upcoming season. On social media, he suggested a reunion with the team he played nine seasons with, in the Denver Broncos. Another report claimed he was strongly interested in playing in his home state for the Dallas Cowboys. And the day before his eventual decision, it seemed all but confirmed he would be returning to the Super Bowl LVI champion Los Angeles Rams.

Yet, Wednesday brought the stunning news that Miller would be heading to join Josh Allen and the fast-rising Buffalo Bills on a massive deal. At its best, the contract is supposed to keep Miller in upstate New York until he’s nearly 40 and pay him upwards of $120 million. However, if you know anything about the NFL, chances are he and the team won’t reach the end of that deal together. So what are Bills really giving Miller?

Mike Florio of Pro Football Talk broke down the terms of the deal on Saturday morning, and in reality, Miller is assured to only receive around $52.5 of that $120 million deal. Just by signing the contract, the veteran linebacker earned over $18 million. He is set to only make $1.1 million this season, and $1.3 million in 2023, along with a $13.4 million roster bonus next year. All of that is guaranteed. 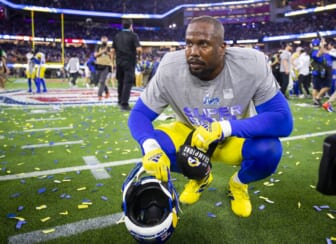 Things begin to change in 2024 when he is set to make $17.1 million with just under $11 million guaranteed. After that, nothing is a given for Miller. Meaning he is likely to be on the Bills roster this year and next. But when 2024 comes he could very well find himself back in free agency based on the team’s performance and their salary cap situation at the time.

Considering that the team should be a title contender over the first two years of Miller’s tenure, at the least, the contract makes a ton of sense for the Bills in looking to add to a solid defense in 2021.