While Von Miller has been linked to several teams ahead of free agency — including a possible reunion with the Denver Broncos — the native of Texas is reportedly intrigued by the idea of playing for his home-state team in the Dallas Cowboys.

Miller is a fascinating addition to the 2022 NFL free agency market. The two-time Super Bowl winner will turn 33 at the end of the month, has 10 years of wear and tear on his body, and has been through a whole bunch of playoff games. However, outside of an ankle injury that cost him the 2020 season, he was a consistent name at the top of the depth chart each week for the Broncos, and for half of last season with the Los Angeles Rams.

Along with having strong attendance on the field each week over 10 seasons, he still remains a legitimate and battle-tested edge rusher in an era where you can never have enough quarterback pressure. Meaning he will certainly have a solid amount of suitors for his championship-levels services.

Could Von Miller suit up for the Dallas Cowboys in 2022?

Before free agency really got hot and heavy, a return to the Rams or even the Broncos had been rumored or even suggested by Miller himself. Both make a lot of sense for the familiarity and for each having a real chance to be title contenders in 2022.

However, a Tuesday tweet from NFL Network Reporter Jane Slater claims Miller has an interest in a different sort of familiarity. That being to play for the most famous football franchise in his home state of Texas.

“Whiff on Randy Gregory but I’m told there is a very strong interest on Von Miller’s part in coming to Dallas. Got a home very close to the facility,” Slater tweeted.

The aforementioned whiff was the Cowboy’s miss on retaining the services of defensive end Randy Gregory. The 2015 second-round pick had agreed to a new deal to return to the only team he’s ever played for on Monday. However, after the team altered the terms of the deal at the last minute, the 29-year-old changed his mind and instead signed with the Broncos. 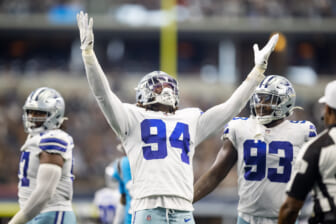 Also Read:
Randy Gregory will sign with Denver Broncos instead of Cowboys after Dallas tried to change contract after agreement