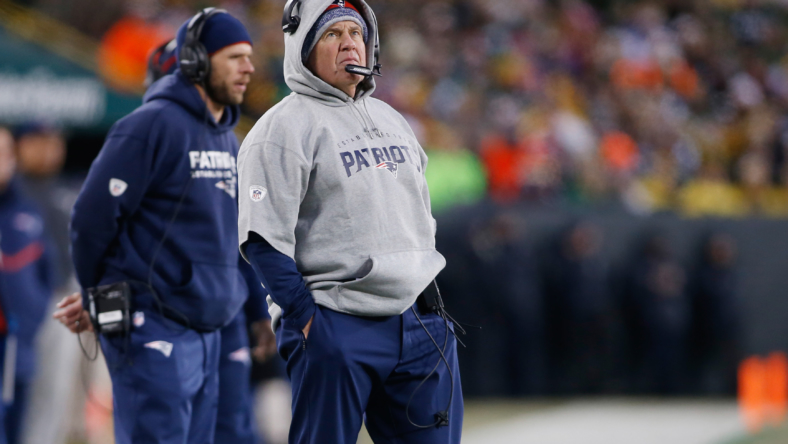 There is a massive matchup that takes place on Sunday afternoon at Lambeau Field. It is not necessarily one that takes place between the lines. It is the head coaching matchup of Bill Belichick and Matt LaFleur. Belichick has the most Super Bowl victories of all time (6). LaFleur has the best winning percentage of all time at 78.8% (min. 50 games).

Both coaches are in different parts of their careers. Bill Belichick is at the age of 70 and has accomplished everything that every football coach dreams of accomplishing. Matt LaFleur is off to a blistering start to his head coaching career and has had Green Bay in prime position to chase a Super Bowl berth in each of his first four seasons with the Green Bay Packers. Their coaching wit will certainly dictate the final result on Sunday.

Bill Belichick is arguably the greatest defensive coach of all-time

Before Bill Belichick arrived in New England in 2000, he was a defensive assistant for over a decade-and-a-half outside of his five-year stint in Cleveland in the early 1990s. He coached the likes of Hall of Fame linebackers Lawrence Taylor and Carl Banks with the New York Giants. He also coached edge-rusher Willie McGinest, who has the all-time playoff sack record (16).

Tom Brady obviously played a big role, but there’s some case to be made that Belichick is the largest reason for the New England Patriots dynasty. While Malcolm Butler played hero in the Super Bowl against the Seattle Seahawks with his game-winning interception at the goal line, it was Belichick’s defense that held Sean McVay’s high-flying Rams offense to three points in the 2018 Super Bowl.

Year in and year out, New England has been very consistent defensively because of the tight ship that Belichick runs. With a rookie quarterback in Mac Jones last season, New England was able to reach a playoff berth after finishing fourth in total defense. Make no mistake about it, coach LaFleur and the Packers will have their hands full on Sunday afternoon with this Patriots defense that is currently ranked in the top 10 in pass defense and sacks.

Matt LaFleur is an offensive genius

In his young coaching career, Matt LaFleur has been around the likes of Gary Kubiak, Mike Shanahan, Kyle Shanahan, and Sean McVay. Those are a lot of offensive geniuses. He has gained a lot of knowledge and is using that same experience in his time with the Packers.

Not only does LaFleur have the back-to-back league MVP in Aaron Rodgers, an elite backfield, and a deep offensive line, but he has his own brain. In 2020, Green Bay ranked No. 1 in scoring offense. In fact, LaFleur’s coached Green Bay’s offense to back-to-back top 10 total offensive seasons in 2020 and 2021.

This season is LaFleur’s toughest test yet due to the departures of Davante Adams and Marquez Valdes-Scantling. He and Rodgers are working together to get rookie receivers like Romeo Doubs and Christian Watson up to speed. So far, Doubs is leading the Packers in receptions (14) and receiving yards (137). Green Bay is currently 2-1 and coming off a massive road win against Brady and the Buccaneers.

This matchup on Sunday afternoon between these two head coaches is a special one. One all-time great defensive coach with all the awards. One hot-shot offensive coach who is off to an incredible start. Green Bay hasn’t beaten New England since 2014. It is such an intriguing matchup, especially with Rodgers under center.

Related: Green Bay Packers’ De’Vondre Campbell and Quay Walker on the cusp of becoming one of NFL’s elite linebacking duos

Aaron Rodgers is special beyond his physical abilities

Arguably one of the greatest quarterbacks of all time will face arguably the greatest head coach and defensive mind of all time. Aaron Rodgers and the Green Bay Packers against Bill Belichick and the New England Patriots. This is just the third time that Rodgers will face Belichick in his storied career.

After Rodgers suffered a concussion the previous week, Green Bay named Matt Flynn the starter before both teams faced off in 2010. In 2014, Rodgers faced Belichick and the Patriots for the first time. Green Bay won 26-21, as the win was sparked by a 45-yard touchdown pass from Rodgers to former Packers receiver Jordy Nelson just before the half. Belichick got the better of Rodgers in 2018, with New England winning 31-17.

This week brings the rubber match between the two. The matchup is particularly fascinating because of Rodgers’ ability to know what the defense is doing before they do it and Belichick’s defense being so hard to decipher.

Fans know all too well the story of the back-to-back MVP. He is the Hail Mary King. He is one of the most talented quarterbacks of all time. His statistics speak for themselves (best QBR and TD-INT ratio of all time). But his ability to diagnose defenses is just as special.

No. 12 frequently knows exactly which defenders are coming on the blitz. He knows if they are going to play zone of man-to-man. He also knows how to counter the defense’s pre-snap tells with audibles. This is why Belichick, who already knows this, will have to be careful with how he attempts to give Rodgers fits at the line of scrimmage.

Rodgers can also catch defenders offsides or defenses with 12 men on the field. He is the pre-snap master. Belichick is a student of the game and completely understands what Rodgers is capable of. However, he has to make sure that his players, who have not faced the future first-ballot Hall of Famer very often, are aware on game day.

Belichick has seen everything in his day

Bill Belichick has been around for a long, long time. The owner of eight Super Bowl rings has coached in six different decades with seven different organizations. He has seen everything that there is to see. He has faced the likes of Tom Brady, Peyton Manning, Joe Montana, Brett Favre, Drew Brees, John Elway, Dan Marino, etc. More often than not, he has come out on top against the best of the best.

The three-time NFL Coach of the Year is the ultimate competitor. His defensive perspective is arguably the best ever. His defenses are quietly dangerous, stout, and always lurking. Belichick is legendary when it comes to disguising blitzes, winning the line of scrimmage, and making timely plays in the biggest moments. This New England defense has been one of the most consistent and well-coached units in all of football for over two decades.

LaFleur and Rodgers need to keep their heads on a swivel as they prepare for this matchup. This Packers offense, which is talented albeit young, needs to be prepared for anything and everything.

With or without Mac Jones, many would say the Packers are the better team. But with Bill Belichick coming to town, records mean nothing. This is going to be a fantastic matchup that NFL historians and fans alike will enjoy watching.