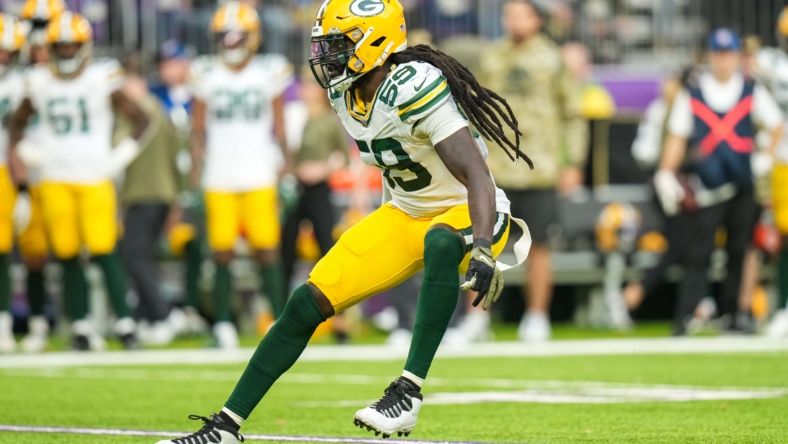 De’Vondre Campbell and Quay Walker. One elite defender, and another who has a chance to be. Campbell is the All-Pro veteran. Walker is the speedy, talented first-round pick. That combo of savvy experience and talented youth is a great recipe for success in the middle of any NFL defense. The Green Bay Packers finally have that in their elite middle linebacker pairing of Campbell and Walker.

On Sunday afternoon, in Green Bay’s win on the road against the Tampa Bay Buccaneers, both Campbell and Walker showed up and showed out. Campbell led the team in tackles, and Walker was always around the ball. This Packers defense is starting to become special, and No. 59 and No. 7 are a big reason why.

Starting with De’Vondre Campbell, he performed the way he always performs for Green Bay. He finished with a team-leading 14 tackles, along with a tackle for loss. However, the biggest play of the game came at the very end. The 2021 first-team All-Pro had the game-winning pass break-up on Tom Brady.

The seven-year veteran is the definition of steady. He has great vision, footwork and is one of the best in the league at getting the ball carrier on the ground. Through three games, Campbell has 29 tackles, which is 11 more than the next closest guy on the team. He is the quiet leader on defense who continues to show up when the team needs him.

With Quay Walker, the rookie only had five tackles. But he had arguably the most important play of the game up until the two-point conversion where Campbell made his key play. With Tampa driving and looking for points towards the end of the first half, Walker stripped Buccaneers wide receiver Breshad Perriman. Green Bay recovered the fumble and halted Tampa’s drive. If he doesn’t make that play, Tampa possibly wins.

That is a fantastic sign for the Green Bay Packers defense. They definitely have experience at every level. But they also have youth at every level too. Walker has the traits and characteristics that suggest he will be making these kinds of plays for a long time in Green Bay. His elite sideline-to-sideline speed and all-around playmaking ability are what make him special.

Campbell, fresh off of a career year in 2021, signed a five-year deal this offseason. Walker was drafted in the first round and is locked up for at least the next four years, with a fifth-year option also available. This defense is going to be in great hands for the next half-decade because of those two, especially if the start to this season is any indication.

Both have combined for 47 tackles over the first three games. They can both play pass defense and rush the passer. Versatility and stability are what they bring to the table. Quarterbacks always have to be wary of where they are on the field.

The Green Bay defense is sixth in total defense, sixth in points allowed, tied for seventh in sacks, and first in third down efficiency. Campbell and Walker have a big hand in each of those categories. Their impact has been felt in so many ways. Packers fans should feel excited about where this defense is now and where it is going. Campbell and Walker are quietly taking the league by storm, it’s only a matter of time before the NFL realizes they are a force to be reckoned with.