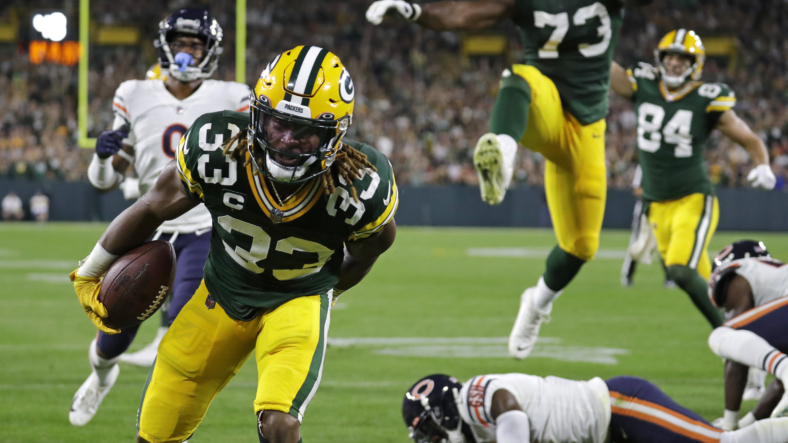 The Green Bay Packers controlled the Chicago Bears on Sunday night en route to a 27-10 win at Lambeau Field. Their offensive performance was much improved after their rough seven-point output in Week 1 in Minnesota. The best player performance of the night came from Pro Bowl running back Aaron Jones, who was the clear focal point of Matt LaFleur’s offense when on the field.

Jones proved on Sunday with his impressive stat line that he is the best all-purpose running back in the National Football League. He ran the ball 15 times for 132 yards and a touchdown, along with recording three catches for 38 yards and a touchdown. Jones averaged 9.4 yards per touch after recording 180 of Green Bay’s 414 total yards. It is clear that he is the most dynamic player on the roster in Green Bay and an absolute machine on the field.

Aaron Jones has proven to be an elite playmaker

In the last three seasons, there is only one other running back in the league not named Derrick Henry to record over 4,000 scrimmage yards and 40 total touchdowns over the last three seasons. That player is Aaron Jones. Not only is the El Paso native an elite runner, but he’s also arguably just as good as a pass-catcher.

After scoring two touchdowns on Sunday night, Jones is already 10th in Packers history in total touchdowns. For reference, he just entered his sixth career season.

In 2019, he burst onto the scene with 19 total touchdowns, which led the entire NFL. No. 33 has recorded 1,100 scrimmage yards in each of the past three seasons, where he’s caught 45+ passes in each of those seasons. On the ground, Jones has a career yards per carry mark of 5.2 (tied for fourth-best in NFL history with Jim Brown). When the Packers get the ball into the hands of their starting tailback, great things happen.

The 2022 season could be a career-best for Jones

Allen Lazard and Marquez Valdes-Scantling are both on new teams. Rookie receivers Christian Watson and Romeo Doubs are still getting acclimated to Matt LaFleur’s offense. This means that running backs Aaron Jones and A.J. Dillon (19 total touches for 67 yards on Sunday night) are primed for a big year of production. Jones is the elusive, lightning-quick back, while Dillon is the thunderous, ground-and-pound back. They are perfect complements to each other.

Jones is the top back on the depth chart and is coming off of three consecutive strong seasons. This season he has a chance to be his best because he might be the No. 1 option in both the running game and the passing game. Leading the team on Sunday night in rushing and catches (tied for the lead with three) is a definite sign of things to come.

One of the few reasons why Green Bay was beaten in the playoffs last season was because the San Francisco 49ers knew the ball was going to Davante Adams. He was dominating the targets. Now, the Packers have a multitude of weapons that Aaron Rodgers can throw to. Sure, there might be some question marks surrounding certain rookies, but that could be a good thing in the end.

Aaron Jones is not a question mark. He is an absolute star and can do so many things for this offense. His ability to be dynamic in multiple facets makes him arguably the best all-purpose running back in the game and the most important skill-position player on his own team.