Atlanta Falcons head coach ‘doesn’t give a crap about predictions’ 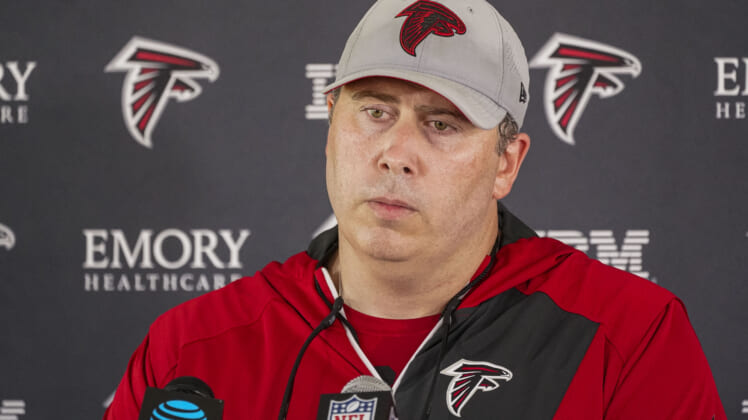 At 40, Atlanta Falcons head coach Arthur Smith may be one of the youngest to lead an NFL team in 2022, but he’s still old-school. He prefers to ignore the noise, not paying any attention to the outside buzz, or perception of his team and what their expectations are in 2022.

Not that there’s been a ton of hype. Most are predicting the Falcons to either finish in last or second-to-last place in what’s perceived to be a weak NFC South. After trading franchise quarterback and former MVP Matt Ryan, many anticipate the Falcons to come much closer to competing for the title of being the worst team in the league instead of being the best.

But, as mentioned, coach Smith doesn’t want to hear it. He really doesn’t care about your or my predictions. He eloquently stated as much on Friday when talking about end-of-the-year expectations.

Even if the Atlanta Falcons, or Arthur Smith ‘doesn’t give a crap’ about anyone’s predictions, it won’t prevent us from having fun. Many people do love reading, or even making predictions themselves.

It’s the offseason, so it’s only natural to start wondering, or in this case, projecting where each team will fall in the divisional standings. Everyone wants to know how their team stands, and what their chances to reach the postseason are.

But don’t tell any of this to coach Smith. He doesn’t want to hear it.

He may not want to hear the predictions, but that’s probably because coach Smith doesn’t like how his team is perceived. You’re either on this side of the ball, or on the contending side, in which case, coaches don’t want to see their team projected to win either. It’s much better to create an atmosphere that continues to make everyone strive to be their best, not to believe they’re already there, when everyone knows a Super Bowl is never guaranteed.

It’s important for coach Smith to get every last bit out of his team. He doesn’t want them to quit before the year’s even begun. The longer this fanbase has hope, the better the atmosphere will be on gameday.

So even though the Falcons are projected to finish dead last in the NFC South, coach Smith wants his team to believe they can finish first, even if that means taking down Tom Brady to do so. But I’m telling you, this is the right mindset to have, even if it’s a bit delusional. Sometimes you need to be a little crazy to be wildly successful. That’s where the Falcons seem to be. Just not sure on the success part.