Atlanta Falcons training camp is closing in and fans of the team are hoping this summer will be the first stop on the road to the Falcons having their first winning season in six years.

This season will also be the start of a new era at quarterback for the Falcons. For the first time in 14 years, Matt Ryan will not be running the offense in Atlanta. And the QB competition between veteran and free-agent addition Marcus Mariota versus 2022 third-round pick Desmond Ridder will be a major story this summer.

Related: Atlanta Falcons schedule – Predictions and analysis for the 2022 season

Let’s dive into Sportsnaut’s Atlanta Falcons training camp preview. As we examine everything you need to know from the camp’s location, schedule, and storylines to follow.

For the fourth straight year, the Atlanta Falcons will base their training out of the IBM Performance Field in Flowery Branch, Georgia. And fans will be able to attend 13 of the team’s summer practice sessions between July 29 and August 25.

Rookies will report to Falcons training camp on July 19. A few days later, the team’s veterans will join their new teammates on July 26. As of now, there are no indications of any camp holdouts heading into the 2022 season. 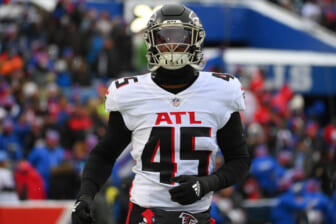 Plus, the Falcons will offer a special night event in August from inside the Mercedes-Benz Stadium on August 15. You can find the full rundown of the practices that will be open to the public below.

Can fans attend the Falcons training camp this year?

Yes, fans can go and check out the stars of their favorite football team in person this summer. If you are interested in getting free tickets to any of the Falcons’ public practices in July and August you can do so here. However, there is an eight-seat limit and fans can grab slots for no more than three practices. 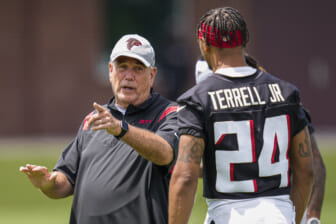 Here are the top storylines to follow and position battles to watch during the Falcons 2022 training camp.

Who will win the starting quarterback battle?

The Falcons had the good fortune for over a decade of having a reliable and legitimate franchise quarterback to help run their offenses. Now they will have to start from scratch with a QB competition between two players with low expectations.

Mariota has long been a player that scouts felt had potential. It will now be up to offensive coordinator Dave Ragone to finally do what no others could not over the first seven years of Mariota’s career. If the former Oregon star can’t deliver, third-round pick Desmond Ridder will have a chance to win the position in his first season. And thus far, it seems like that might be exactly what happens. 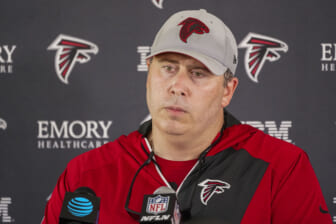 Three starting spots are up for grabs on the offensive line

Jake Matthews and Chris Lindstrom are the only sure locks to start on the offensive line in 2022. This means that both tackle positions, and right guard, could be up for grabs. Jalen Mayfield, Kaleb McGary, and Matt Hennessy are expected to fight to keep their jobs this summer.

Their recent play has left the door open for Germain Ifedi, Justin Shaffer, and Drew Dalman to possibly take their spots over the next couple of months. Those various battles will be important to watch as training camp and the preseason plays out.

There was a time when Deion Jones was a key player on the Falcons’ defense and reliable talent in the linebacker corps. However, after some major steps back, his spot on the depth chart may be up for grabs. Especially since recovery from shoulder surgery could keep him out of training camp and much of the preseason. 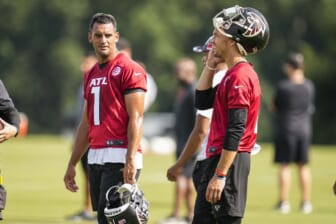 With Jones far from a guarantee to deserve a starting job upon his return, there is a massive opportunity for Mykal Walker, rookie Troy Anderson, and free agents Rashaan Evans and Nick Kwiatkowski. Watching them fight it out for snaps and rising to the occasion during their minutes in key situations will be a major story in training camp.