Arizona Diamondbacks must go to the future now with Alek Thomas 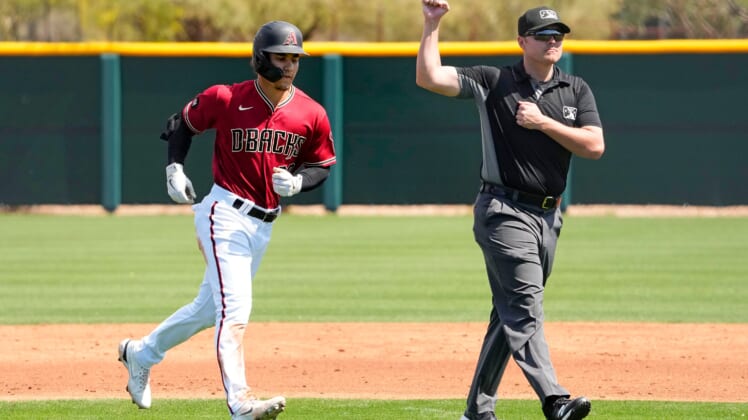 Outfielder Alek Thomas is considered the Arizona Diamondbacks’ top overall prospect and one of the top-20 prospects in baseball.

A second-round pick of the Diamondbacks out of Mount Carmel High School in Illinois back in 2018, the 21-year-old Thomas has ascended Arizona’s minor league system in a big way despite the 2020 season being canceled due to COVID-19.

With Arizona now in last place and going nowhere fast after finishing last season with a 52-110 record, it’s now time for the team to make that move and call Alek Thomas up from Triple-A Reno. Here’s a few reasons why.

Arizona Diamondbacks starting outfield has been a disaster to open 2022

Arizona has scored a total of 33 runs in 12 games this season — winning four of those outings. The team ranks dead last in batting average (.168), 26th in on-base percentage (.282) and 29th in OPS (.563). That’s historically bad, and it has fans in the desert wondering how things might change.

It also starts with Arizona’s trio of starting outfielders who have been an absolute disaster at the plate this season.

That’s just pathetic. Absolutely pathetic. In fact, Smith’s .219 average ranks No. 1 among regular Arizona’s starters. The only saving grace here has been designated hitter Seth Beer, who is hitting .438 with 8 RBI in 11 games.

Alek Thomas would give the Arizona Diamondbacks some life

It was just ahead of Opening Day that the Diamondbacks sent Thomas back to minor league camp after he hit .222 with a .572 OPS in 27 Spring Training at-bats. At that point, the D’backs explained the decision.

“He had a lot of success last year here and I think we’re just continuing to look for him to improve the approach. He made huge strides last year and he’s been a performer everywhere he’s been, but I think just tightening up those at-bats and consistency, I think that’ll just be the next step for him to be ready to go up to the big leagues and have success there.”

The question here is rather obvious. Why wouldn’t Arizona let Thomas work these things out at the big league level? It’s not a confidence thing. As we’ve seen throughout his minor league career, that’s not a problem. Rather, it’s all about fine-tuning his ability to adjust at the plate.

For an Arizona team that is looking at another 100-plus loss season, it has to offer the fans something to be excited about. There’s not a lot of that right now with the big league club having scored a total of five runs in their previous five games before an 11-run onslaught against the Washington Nationals on Wednesday. Prior to that, the D’backs had scored 22 runs in 11 games. That’s laughable.

Alek Thomas is ready for the big show, and the Arizona Diamondbacks need to pounce

As Barfield noted above, Thomas has proven that he can hit at all levels. Last season at Triple-A Reno, he hit .369 with eight homers and 18 RBI while boasting a 1.091 OPS in 34 games. Prior to being called up from Double-A, Thomas posted a .283 average with 10 homers and 41 RBI in 72 games.

There’s going to be some growing pains here. That’s especially true with Thomas’ high strikeout rate in the minors (249 K’s in 1,330 plate appearances). But that’s what he can attempt to fix for a rebuilding Diamondbacks team on the fly. Holding him back even further as the Illinois native is set to turn 22 makes no sense.

As for Thomas, he seems to think he’s ready for the big show.

“To me it feels pretty comfortable, pretty loose and it doesn’t feel like a high-effort swing — but I do swing hard. I watch a lot of videos of Ken Griffey Jr., of Harold Baines — I’ve worked with Harold Baines before, and he’s given me good tips in the past.

It’s a lot of looking back on other people’s swings. I’m not really trying to emulate it, but it’s definitely a good mold for me to have and for me to look at. And also, Barry Bonds is another person I look at as well.”

Alek Thomas on who he molds himself after, via MILB.com

The future is now for Alek Thomas and the Arizona Diamondbacks. It needs to happen sooner rather than later so that the downtrodden organization and its fan base can get a glimpse of what could be a bright future in the desert.