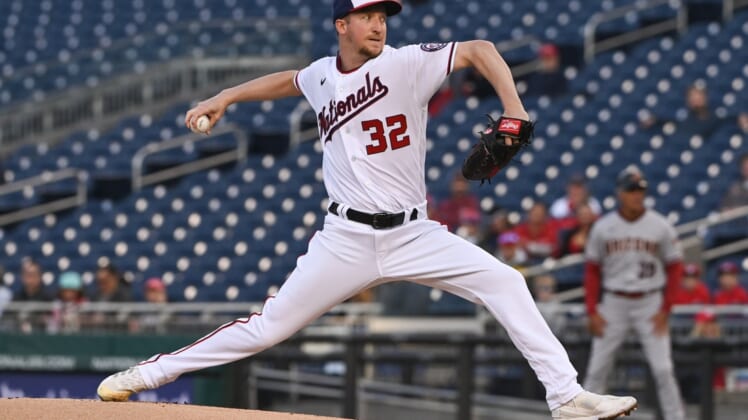 Daulton Varsho homered and drove in three runs as the visiting Arizona Diamondbacks broke out of their early-season slumber with an 11-2 rout of the Washington Nationals on Wednesday.

Seth Beer went 3-for-4 with three RBIs for Arizona, which entered the game last in the majors in runs scored.

The D-backs snapped a three-game losing skid while setting season highs in hits (10) and runs. Ketel Marte had two hits with an RBI and two runs scored.

Merrill Kelly (1-0) allowed one run on six hits over six innings. He walked one and struck out five.

Washington, which opened the series with a doubleheader sweep on Tuesday, fell behind 11-0 after five innings.

Arizona began its offensive outburst in the second inning against Erick Fedde. Sergio Alcantara’s sacrifice fly scored Christian Walker, who led off and reached first on a throwing error.

The D-backs added three runs in the third. Marte doubled with one out and David Peralta followed with a single to center. Walker and Beer hit consecutive RBI singles before Walker scored on Pavin Smith’s sacrifice fly.

Arizona added to its lead on Varsho’s two-run homer off Fedde in the fourth, a 392-foot blast to right field. Beer delivered a two-run double off Francisco Perez to cap the four-run inning.

Fedde (1-1) allowed six runs (five earned) on eight hits over 3 1/3 innings. He walked one and struck out three.

Arizona stretched its lead to 11-0 with three runs on one hit in the fifth. Patrick Murphy allowed the first two batters to reach base before Carson Kelly scored on an error. Varsho’s sacrifice fly scored a run and Yonny Hernandez then came home on Marte’s groundout.

Arizona had scored a total of 11 runs over its last seven games before matching that total on Wednesday.

Nelson Cruz and Keibert Ruiz each drove in runs for Washington, which went 3-for-12 with runners in scoring position.

Before the game, Washington placed left-hander Sean Doolittle on the 10-day injured list with a left elbow sprain and recalled left-handed relievers Francisco Perez and Sam Clay from Triple-A Rochester.