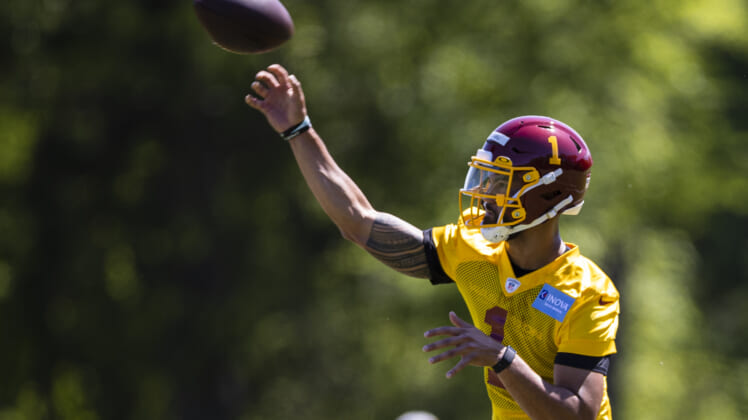 You may have heard, the United States Football League has returned with fresh rule concepts, advanced technology, and a new batch of football players hoping to show why they belong in the NFL.

There are many reasons why fans will be intrigued to tune in on Saturday, April 16 when the first game kicks off but here are four USFL storylines to keep an eye on this season.

One thing to know about the USFL from the start, is it’s not some cheap imitation of football. Their investors have already put in roughly $150 to $200 million and have plans to add an additional $50 million in short order. They’re committed to making this work.

This may be why you’ll get to see technology the NFL hasn’t even figured out a way to use yet. One of those ideas includes a new way of measuring first downs– digitally.

So, that’s awesome. We’re intrigued to see whether the technology is as good as it suggests, if the measurements really do appear more accurate or not. By using chips (not Doritos or Fritos) in their footballs, the USFL believes they can provide a ball spot more accurate than ever. Can they? That’s why we’ll tune in and see. It’s better than an index card.

No, it’s not as if the USFL chooses to play on a round field or a yard that doesn’t still feature 100 yards in between endzones. The basic football concepts and rules are all the same as those we’ve come to enjoy in both college and pro football, which is wonderful.

That doesn’t mean the USFL won’t try a few small changes here and there in an attempt to grow the game of football in other ways.

For example, the USFL will offer teams a chance to retain possession after scoring. They can either try for an onside kick recovery or attempt to convert a fourth-and-12 play from the 33-yard line. If they fail, the defense takes possession at the spot of the ball.

Extra points? How about going for three? Teams can do the ol’ extra point kick, they can go for two at the 2-yard line, or get this, go for three. Starting from the 10-yard line, teams will have the option to go for three points if they reach the end zone on one extra play after scoring a touchdown.

This option to be extra aggressive and score additional points when a team needs a few more to catch up, either tying or going ahead when trailing should make the contest more entertaining to the final whistle. It’s a fascinating thought.

Another twist is how overtime is handled. The USFL takes a three-round shootout approach where they have three plays from the 2-yard line to score. Whoever has the most points on the scoreboard after all three rounds wins the game.

You never know how successful some of these adaptations could be, maybe we might even see the NCAA or the NFL have

There isn’t a superstar quarterback that we know of yet in the USFL, and there may not be one that emerges from the 2022 USFL rosters, but there will be eight different teams starting a quarterback, which presents plenty of opportunities.

Diehard football fans in some corners of the world will recognize a few of the QBs set to start the year. Tampa Bay Bandits QB Jordan Ta’amu is one who flashed some talent in the XFL and has since received a few cups of coffee in four different NFL cities. Maybe this second chance in an alternative football league can be the springboard for success in the NFL? Either way, the dual-threat’s skillset is fun to watch on the gridiron.

Let’s not forget the first pick in the USFL draft, former Michigan Wolverines star quarterback Shea Patterson. He was a five-star HS QB prospect and may just need some extra seasoning before he puts it all together. What if we see the beginnings of that emergence happen in the USFL with the Michigan Panthers?

Or how about 2016 NFL first-round pick Paxton Lynch, who comes in at a towering 6-foot-7? He also plays for the Panthers, with Patterson, which could present a fun storyline in itself.

Another player former AAF fans might know is Luis Perez, who stands to lead the New Jersey Generals. Now 27-years-old, Perez is getting another chance at success with the USFL. Who knows what it could lead to? These are just some of the USFL quarterbacks we can expect to see this season.

Football fans already know Jeff Fisher quite well. Despite having been an NFL head coach for 22 seasons and 339 games, Fisher hasn’t gotten a sniff for another pro coaching gig since he was fired from the Rams in 2016. Sure, he has more coaching losses than any other coach at 165 (Dan Reeves is tied with 165), but he also has 173 wins. The guy knows how to coach, no one is questioning his experience or know-how.

Well, in 2022 we’ll get to see Fisher back on the sidelines, coaching the Michigan Panthers. Can he prove his over two decades of time in the NFL is worth a few extra wins in the USFL? The Panthers play their first game on Sunday, April 17 at 12:00 PM on NBC.