In the midst of the Miami Marlins being sellers at last season’s MLB trade deadline, the future of third baseman Brian Anderson is a mystery. The acquisition of infielder Joey Wendle furthers that mystery. Is Anderson poised to be traded before the 2022 regular season?

Anderson was limited to 67 games in 2021 due to a shoulder injury and had a shaky campaign in the games he appeared in to begin with. On the other hand, the 28-year-old is a compact hitter from the right side who’s adept at playing both third base and right field.

Miami could use an Anderson trade to somewhat replenish its farm system after already making a handful of trades this offseason. The player himself can be a team’s answer at the hot corner, as well as a consistent source of offense.

3. Brian Anderson to the Seattle Mariners

The Mariners have an opening at third base. While midseason pickup Abraham Toro could potentially move from second to third, Seattle is better off getting a veteran to start at the hot corner. Acquiring Anderson makes some sense for manager Scott Servais’ ballclub.

Defensively, the Mariners would have a sound infield corps with Anderson, J.P. Crawford, Adam Frazier and Ty France from left-to-right. At the plate, Anderson gives them a smooth hitter who can make an impact anywhere in the order and boost an offense that was one of the worst in the sport last season; the Mariners were tied for 22nd in MLB in runs last season (697).

Anderson’s versatility bodes well for the Mariners. Although Mitch Haniger typically plays right field, Anderson could get reps at the corner outfield position if the former gets hurt or receives a day off. Plus, the Mariners have a handful of young outfielders who are either yet to come into their own (Jarred Kelenic and Taylor Trammell) or have been sidetracked by injuries (Kyle Lewis).

If Seattle’s younger players make strides, Anderson and Frazier would become veteran complements for a functioning offense, which would accompany a reliable starting rotation. Anderson’s arrival wouldn’t break the prospect bank for the Mariners, and they’d be seeing if the five-year player can be their answer at third.

All that being said, the Mariners may refrain from trading for Anderson as they already made a considerable trade for Frazier and could instead get an upgrade at third through free agency.

For the most part, the Nationals have been quiet this offseason. Whenever the MLB lockout ends, they have work to do, especially in the field. Acquiring Anderson would help solve an imminent issue in their infield.

Outside of first baseman Josh Bell, manager Dave Martinez’ infield is a mystery. Cesar Hernandez, one of the Nationals’ few free agent signings, may be the everyday second baseman, but that’s not a certainty due to the presence of young infielders Carter Kieboom and Luis Garcia. Is Alcides Escobar the opening day shortstop? All in all, Kieboom was inconsistent at the plate when he became the everyday third baseman after the Nationals’ trade deadline fire sale. Anderson could be their new third baseman.

Defensively, Anderson helps smooth over a lacking infield corps, giving the team a veteran corner infield duo and someone who fields his position well. Offensively, Anderson gives the Nationals a player in his prime to complement some of their young hitters like Keibert Ruiz, Lane Thomas and Garcia.

Anderson’s arrival could lead to Kieboom getting reps at shortstop, allowing the Nationals to assess how the latter fares at the position he played when they drafted him. Furthermore, Anderson would be getting the chance to prove himself and become a player who’s part of what the Nationals hope is a quick turnaround. If he returns to being the reliable third baseman he was pre-injury, the Nationals have one less position to worry about in the long run.

The factor that could prevent the Nationals from making a trade with the rival Marlins is them simply not wanting to trade any prospects, as they continue to deepen their minor-league ranks.

It’s fair to ponder third baseman Justin Turner’s future with the Dodgers, as he has one guaranteed year remaining on his current contract and is coming off a season-ending hamstring injury. Anderson poses a compelling option for manager Dave Roberts’ depth chart.

There are a few different scenarios that make Anderson a fit in Los Angeles. As previously alluded to, Turner, 37, is coming off a gruesome injury. Maybe the Dodgers move a healthy Turner to second base in favor of a younger third baseman while having another proven infielder? 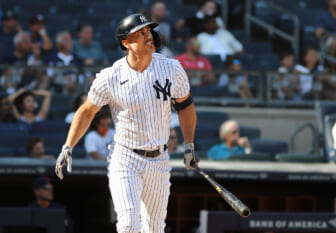 There’s also the health aspect of this ballclub, as outfielders Cody Bellinger and Mookie Betts missed considerable time in the 2021 regular season. Anderson can bounce out to right field if Betts goes down, moving Turner or Gavin Lux to third base. The Dodgers have often possessed a great deal of defensive versatility, which Anderson provides.

Making a trade may not be ideal for the Dodgers at the moment, as they watched their monumental midseason trade for Max Scherzer and Trea Turner blow up in their face; the Dodgers lost to the Atlanta Braves in the National League Championship Series which was followed by Scherzer and Corey Seager leaving in free agency. At the same time, it shouldn’t cost the Dodgers a fortune to acquire Anderson, as the writing is on the wall for the third baseman in the wake of the Marlins’ flurry of moves.

Even in what has been an offseason to forget, the Dodgers are still an NL contender. That’s why they re-signed Chris Taylor to a $60 million deal. Anderson fits their operation and gives them more proven depth.