After 17 weeks of NFL entertainment, the league’s final 12 teams are headed to the postseason. Along the way, some crazy and unpredictable events went down.

A couple of under-the-radar franchises blossomed, one of which has not seen a postseason trip since 2002. We also watched while some teams with high expectations absolutely imploded.

Several high-profile head coaches were fired and there has was a crazy number of backup quarterbacks called to duty to fill in for various reasons.

With that, here are the top-10 craziest things we took note of during the 2016 season. 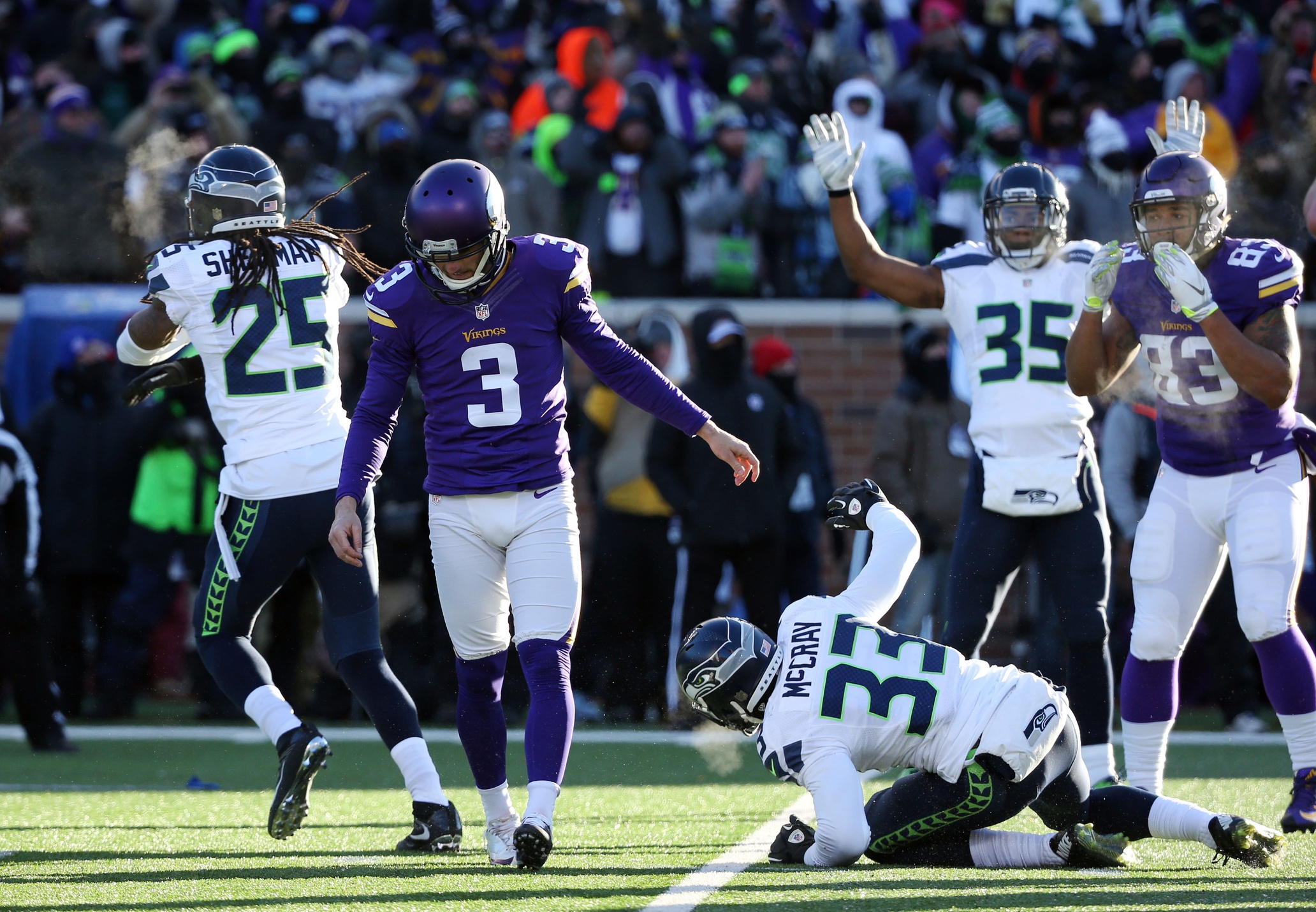 The 2016 NFL season will go down in the books with 55 missed extra points and 21 extra points blocked. Week 11 even marked an NFL record when 12 extra points were missed around the league.

The Seattle Seahawks topped the charts and blocked five PATs.

When it came to kickers missing the PAT altogether, the Minnesota Vikings and Cincinnati Bengals owned this sad department by missing six extra points each. Things were so bad for the Vikings that they finally fired Blair Walsh in November. This was after he missed four extra points and four field goals after the regular season started.

It was definitely a peculiar season when it came down to kickers making a difference. Just ask the New Orleans Saints that had a victory ripped from their arms by a tricky Denver Broncos block and score in Week 10.

2. The Rams’ series of unfortunate events

The Rams almost certainly would like to hide under a rock after a disastrous season. From general manager Les Snead’s bold move to secure the No. 1 draft pick to the recent firing of Jeff Fisher, the season went up in smoke in epic fashion.

The Rams gave up a ton of draft picks first of all to select Jared Goff — the same quarterback who pined away on the bench until Week 11.

Case Keenum was under center before that, and he was pretty awful. The scary thing is, Goff wasn’t so great either, which is concerning considering what the Rams forfeited to snag him. Embarrassingly, the Rams offense averaged a league-low 14.5 points per game.

Speaking of those traded draft picks, the Tennessee Titans scored by getting what would have been the Rams’ No. 5 pick in the upcoming 2017 NFL Draft. A pick that the Rams could surely have used next May to do some rebuilding.

But what is done is done, and no team is likely going to want anything to do with Fisher (logically speaking, that is). The bright side is, the Rams can at least thank the San Francisco 49ers for winning only twice, which prevented Los Angeles from finishing at the bottom of the NFC West. 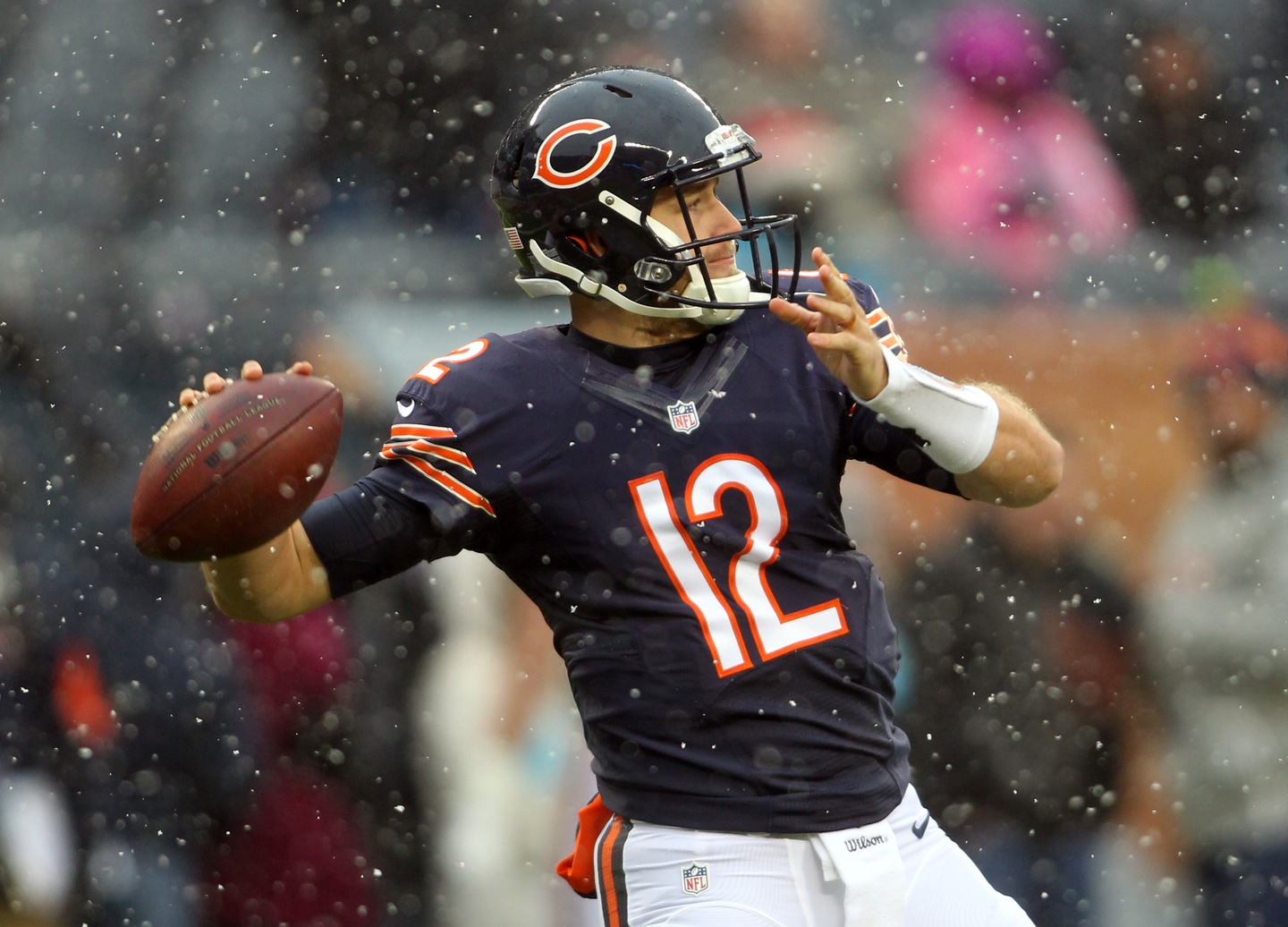 At the conclusion of the NFL regular season, 17 teams started a backup quarterback for various reasons. We are talking about backups actually brought under center, rather than one coming in to relieve the starter when a win or loss was in the bag.

Whether it was due to a suspension, an injury, poor performance or just pandemonium at the position, a lot of shifting took place.

New England starting somebody other than Tom Brady was a first since 2008. Then late in the season, Carolina Panthers head coach Ron Rivera benched Cam Newton for not wearing a necktie before the game. It was quite ridiculous, and the plan backfired big-time when Derek Anderson threw an interception in his opening drive.

All the while, terrible play caused the San Francisco 49ers, New York Jets, Los Angeles Rams and most recently, the Houston Texans and Buffalo Bills, to bench their starters at some point.

This trend has leaked into the playoffs, leading to something nobody could have predicted.

in
a
playoff
game

4. How incredibly bad the San Francisco 49ers truly are

It is not surprising after yet another horrible campaign that the 49ers did some housekeeping. Upon the conclusion of a Week 17 loss, the 49ers kicked both their general manager and head coach to the curb.

The franchise finished up the 2016 NFL season with the 32nd-ranked defense and 31st-ranked offense. While we could pick on the Cleveland Browns, whose stats are close here, we are targeting a team that actually played in a Super Bowl in February of 2013. Since then, the franchise has burned through three head coaches and won a total of 15 games the last three years.

This season, the 49ers offense was particularly awful and averaged just 19.3 points per game. It flat out could not compensate for what the defense was giving up on a weekly basis. We are talking about league-highs — 406.4 yards and 30 points yielded on average per tilt. Running backs and mobile quarterbacks were torching the 49ers defense in particular, averaging 165.9 rushing yards at a pace of 4.8 yards per carry.

Needless to say, the team is in a shambles, and some major overhauls will need to take place during the months to come.

Speaking of seeing many more than 32 quarterbacks slinging passes this season, some other players at different positions got in on the action. And while fans were entertained by the plays, touchdowns thrown by non-quarterback guys surely messed with a few fantasy football stats.

The following players all have one passing touchdown on their record for the 2016 season: Doug Baldwin, Dez Bryant, Marquise Lee, Willie Snead, Cameron Meredith, DeMarco Murray and Dontari Poe.

While it is not uncommon for offensive players to make some sneaky shifts to line up and play quarterback, Poe is certainly a name here that nobody expected to see. The Kansas City Chiefs pulled a fast one when their extra-large “quarterback” entered and tossed this touchdown against the Denver Broncos in Week 16.

And he just threw a TD for the @Chiefs. Yes, really. https://t.co/lSTz7iB5kG

The play was beautifully orchestrated, and now Poe has just one less touchdown than Cleveland’s quarterback, Robert Griffin III, who started in five games this year. Go figure. 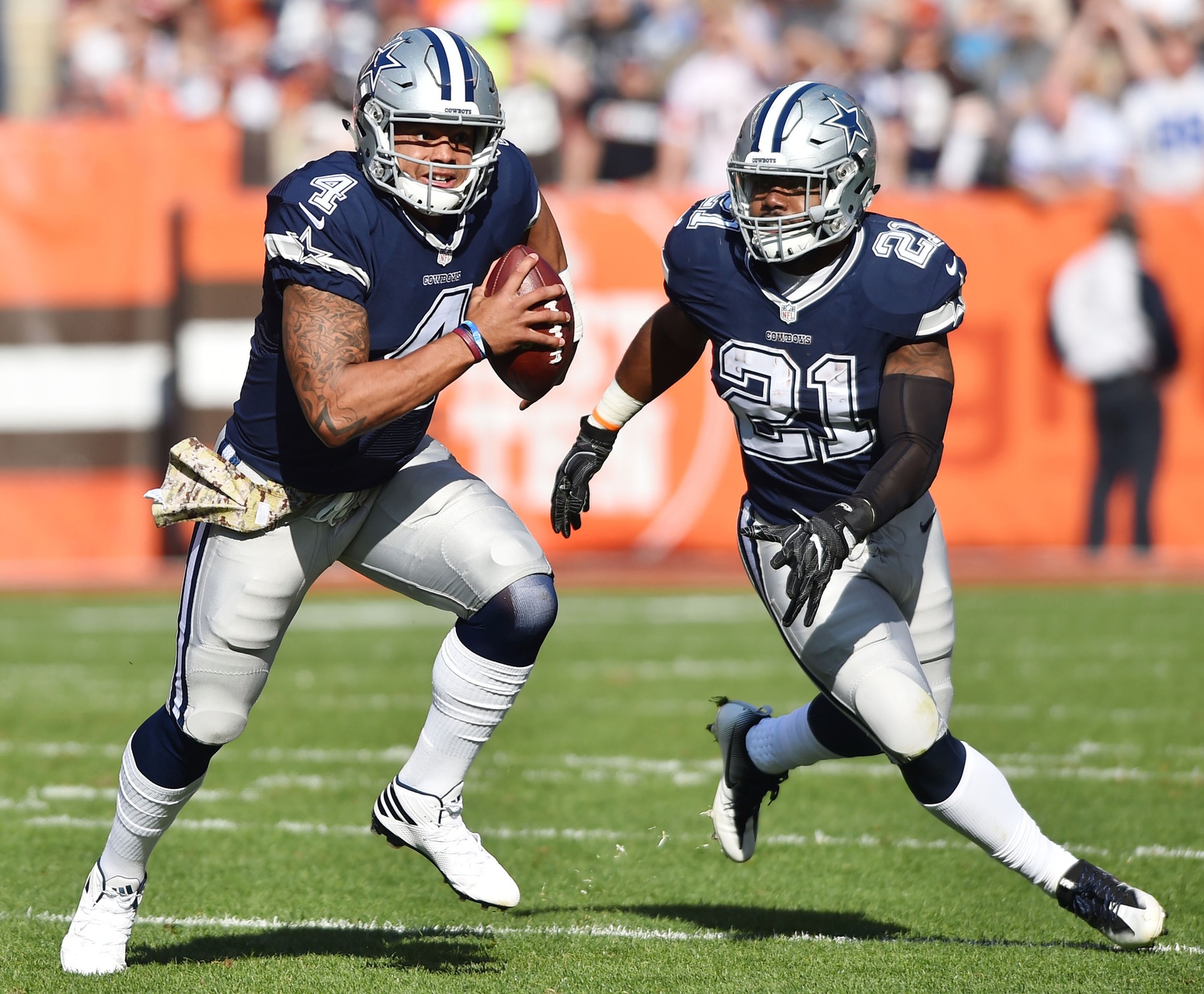 Nobody saw this coming after a horrible finish 4-12 finish in 2015. The Dallas Cowboys nearly ran the table this season with a quarterback they chose 135th overall in the 2016 NFL Draft. It was the debut of the “Dak Attack” when Prescott started in place of the once again injured Tony Romo.

Prescott has simply been remarkable under center this season. So much so that Romo, midway through the season, conceded that the Cowboys are Dak’s team now. Prescott finished the year with a grand total of 3,949 yards, 29 touchdowns and just four interceptions. His overall quarterback rating was 104.9.

But he was not the only bright star in Dallas this year. Rookie running back Ezekiel Elliott was worth every ounce of the team’s first-round draft pick. He led the league in rushing yards (1,631) despite being held out of his final game to rest. The youngster also had 16 combined touchdowns and added 363 receiving yards to his stats.

Overall, the Cowboys offense ranked No. 5 while their defense contributed enough to help the team win all but three games in 2016. The ‘Boys are now headed into a bye week after clinching the NFC’s top spot in Week 15. The Super Bowl is clearly the goal here for a Dallas squad that has not seen the big game since 1995.

Touching on Elliott, who we just mentioned, 2016 marked a unique year filled with some fantastic running back performances.

Noteworthy here is Bell, who missed three games due to a suspension and was held out in Week 17. Just imagine if he had played the whole year. And, rebounding from disappointing 2015 seasons were McCoy, Murray and Gordon. Hands down the most shocking guy here is the Bears rookie gem, Howard.

Drafting strategies for 2017 are sure to change quite a bit, all considering. 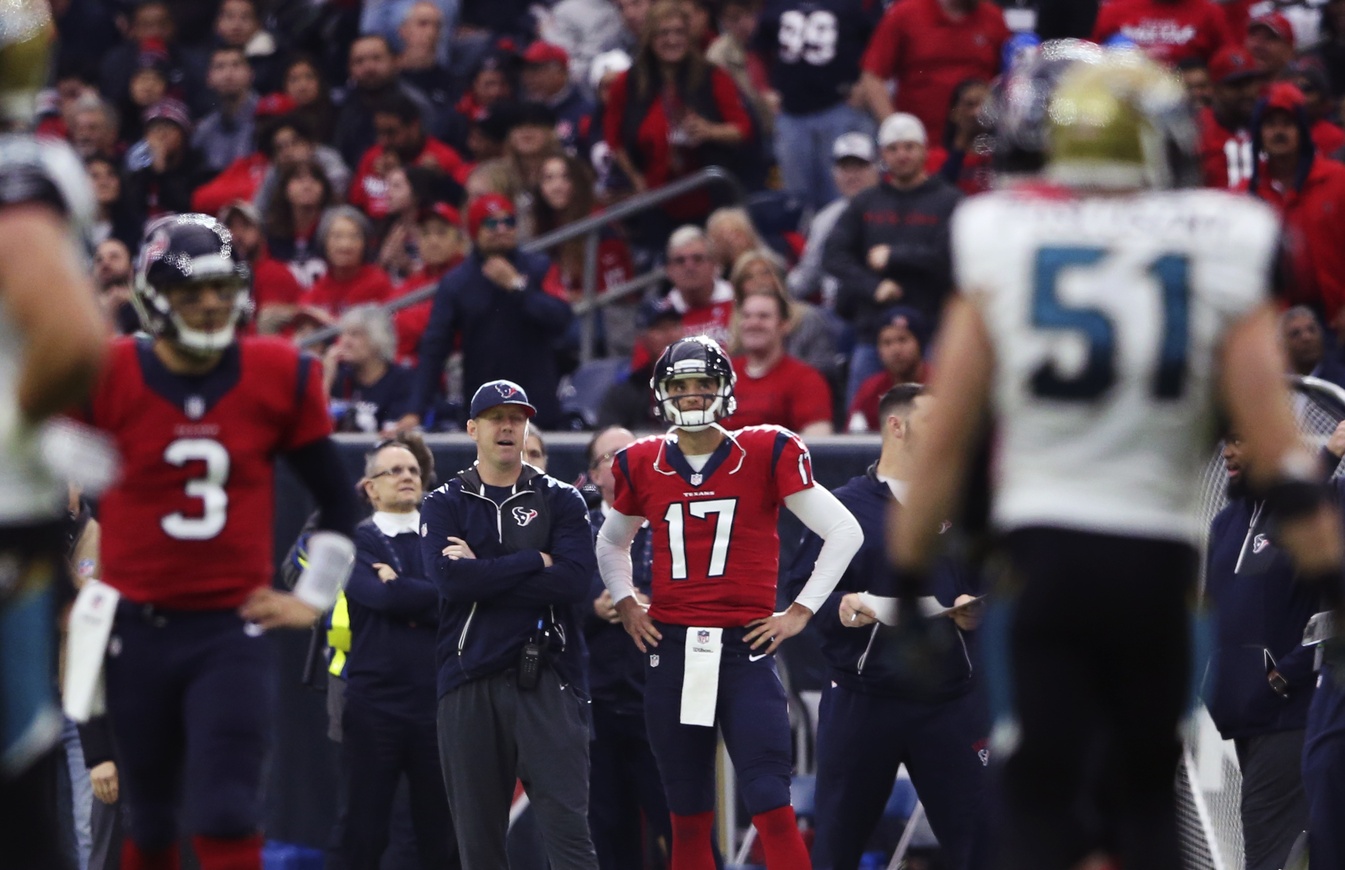 Just like last season, the Texans slithered their way into the playoffs, despite having instability at the quarterback position. The team managed nine wins, which did the trick to win the AFC South.

Now, Houston is headed to the Wild Card playoff round to square off with the Oakland Raiders. Which quarterback is going to be under center at quarterback is the million dollar question. Brock Osweiler has been an utter disgrace at the position for most of the year. This is why he finally got benched in lieu of backup Tom Savage in Week 15 after a turnover-filled performance.

In Week 17, however, Savage took hit and the Texans had to peel Osweiler off the bench to fill in. Now, Savage is on concussion protocol.

Osweiler finished the regular season with a 72.2 rating after throwing 15 touchdowns compared to 16 interceptions. But, Savage has not exactly dazzled either in his limited opportunities.

Per the usual, the team will have to rely on its No. 1-ranked defense to shake up the Raiders’ offense that is absolutely reeling after losing Derek Carr for the season. However far the team makes it, the Texans must acknowledge they blew it royally by signing one of the biggest free agent busts of the season to a $72 million deal.

9. Both Super Bowl 50 teams made it nowhere near the playoffs 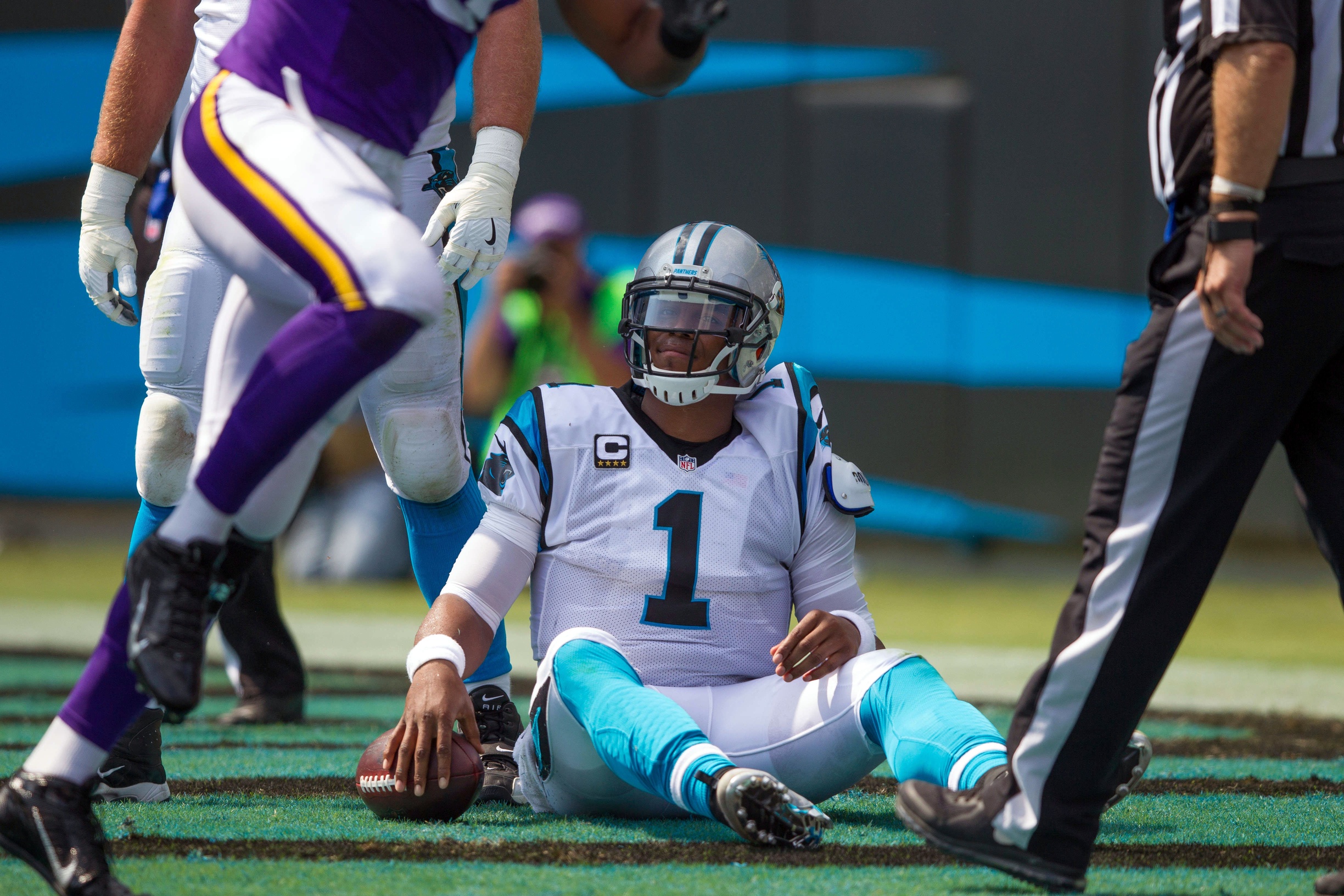 What happened to last year’s Super Bowl teams, the Denver Broncos and Carolina Panthers, in 2016?

Embarrassingly, Carolina finished last in the NFC South with just six wins. Talk about a major hangover that lasted 17 weeks. Only seven other NFL teams had fewer wins than the Panthers. The team struggled at nearly every aspect of the game on the field. Carolina’s defense ranked 21st and the offense was not much better finishing 19th overall.

Last year’s league MVP, quarterback Cam Newton, was a different guy than he was last year. He put up a decent amount of yardage but completed a lowly 52.9 percent of his passes and scored just 24 touchdowns compared to his 45 from 2015.

As for the Broncos, they had their own set of issues after having to turn to their young and inexperienced quarterbacks, Trevor Siemian and Paxton Lynch. The Broncos defense was the bright spot and a force to reckon with. But without a strong offense, the Broncos lost more games than fans would have liked.

The nine wins the Broncos managed were simply not enough to compete within the high-rollers in the AFC West. Sadly, it is the first time since 2011 that Denver did not win its division. If that is not bad enough, the Broncos must also find a new head coach after losing Gary Kubiak to retirement on Monday.

There are some players in the NFL who practically seem ageless. We will give a shout-out to a few here who come to mind.

For starters, New Orleans Saints quarterback Drew Brees tops this list. He just accomplished his fifth 5,000-plus yard passing season at the ripe age of 37. To no surprise, he led the league in passing yards with 5,208 on the books to be exact. He also had 37 passing touchdowns and added two rushing scores. When Father Time will catch up with the future Hall of Famer is anyone’s guess.

Indianapolis Colts running back Frank Gore is also an anomaly. At the age of 33, Gore just pounded the rock to finish 2016 with 1,025 rushing yards. Gore has only three seasons out of 12 that he has not rushed for at least 1,000 yards. He is the true definition of a workhorse and has legs that have literally carried him for miles.

Arizona Cardinals wide receiver Larry Fitzgerald makes this list as well. He led the league in receptions with 107 on the year. At 33 years-old, Fitz doesn’t appear to be showing much signs of aging and tallied another 1,000-plus yard season. Retirement or departure from the Cardinals does not seem to be in his immediate plans, despite the team’s middling finish to the season.

With that, there is honestly not enough time to toot the horn of all of the exceptional NFL athletes who are 30 and older, still going strong. But, here is a list of 10 we compiled this past November.