Zach LaVine opens up on contract talks with Chicago Bulls

Zach LaVine landed with the Chicago Bulls in 2017, joining a franchise that was desperate for a young star to uplift a struggling team. With the Bulls finally showing signs of life a few years later, Chicago must now convince the rising guard to stay.

The 26-year-old’s game has grown in a leading role. After averaging 16.7 ppg in 2017-’18 and 23.7 ppg the following season, LaVine has become one of the best players in the NBA. It took several years for the Bulls to put impact talent around him, finally landing Nikola Vucevic in a blockbuster deal in March.

But just as the Bulls are starting to find their way, LaVine is approaching free agency. Entering the final year of his four-year, $78 million contract, Chicago is working against the clock to retain its All-Star guard. 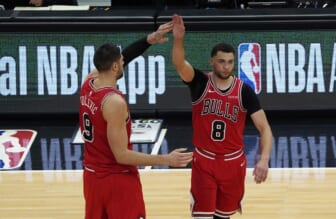 Weeks before NBA free agency begins and a top-heavy class of guards hits the open market, LaVine is thinking about his future in Chicago and where things stand regarding a long-term deal.

“I think that’s going to play out the right way. I’m not even worried about it right now. But we should be in talks soon. And we’ll see what happens.”

If the Bulls don’t sign LaVine to a long-term extension this summer, he will become one of the top free agents next offseason. That’s what makes this summer so crucial for the organization.

Will Zach LaVine stay in Chicago?

Fans hoping to see LaVine give the Bulls a discount this summer, sacrificing his money to help the front office acquire more talent, will be disappointed. LaVine made it clear in recent months that he wants a salary that reflects his worth.

It’s hard to argue against him become one of the highest-paid guards in the NBA. He earned his first All-Star selection this past season, posting strong numbers across the board.

When Vucevic arrived in Chicago, LaVine took on more responsibility as a distributor. He averaged 6.8 assists per game in April and got his new teammate involved.

The Bulls won’t have their first-round pick in the 2021 NBA Draft, so executive Arturas Karnisovas will have limited draft capital to make something happen. But with Coby White, future first-round picks and the possibility of a Lauri Markkanen sign-and-trade, Chicago could pull something off this summer.

If the Bulls can land another high-end player, creating a strong trio, there’s a strong chance Zach LaVine will re-sign. Otherwise, odds favor him testing free agency a year from now.