The Chicago Bulls took too long to come together in their first season under head coach Billy Donovan, but as they brace for their second year of a new era, they’ve made a few offseason moves that can help them take that next step.

Chicago missed out on a spot in the NBA’s play-in tournament by two games. However, Donovan’s squad didn’t quit down the stretch, winning five of its last seven to finish on a high note.

With a decent core in place and a generous amount of salary cap space, the Bulls had the means to upgrade this NBA offseason, and they certainly did that. Continue reading to see what else might be in store as they gear up for the 2021-22 campaign.

As the Chicago Bulls have done their best to surround their star guard Zach LaVine with a playoff-caliber roster, other teams have dreams of doing the same. Buried toward the bottom of a Boston Globe article, Gary Washburn raises the idea of the Boston Celtics having LaVine on their radar when he is scheduled to become a free agent in 2022.

With the Bulls unable to agree to a contract extension with LaVine’s camp, we will likely hear plenty of other reports linking the 2021 All-Star to other organizations until a new deal gets done.

According to Michael Scotto of HoopsHype, the Bulls are among four teams interested in having a look at veteran forward James Ennis.

It’s already been an eventful pro basketball offseason in the Windy City, yet Chicago should absolutely consider a flier on Ennis if the opportunity presents itself. He’s been trapped on the Orlando Magic for the last two seasons, and before then, was a solid role player for the Philadelphia 76ers.

Ennis is a floor-spacing wing who’s bounced all around the NBA. He’s quality insurance against any early injuries, and he can be an energy guy off the bench when he does play with solid defense.

Marc Berman of the New York Post reported that the Bulls made a contract offer to Derrick Rose in free agency, but that the New York Knicks “blew it away.”

Rose was born in Chicago and began his NBA journey there as the No. 1 overall pick in 2008. He played under head coach Tom Thibodeau during his best years, and is enjoying a resurgence with the Knicks under Thibodeau’s guidance once again.

The familiarity factor with Thibodeau and the Knicks’ success last season ultimately drove Rose to remain in New York, not to mention a better payday. Then again, the Bulls were such aggressive spenders this offseason, you can hardly blame them for not being able to meet Rose’s demands.

But wow, how could would it have been to see Rose rocking a Bulls uniform again?

Substack’s Marc Stein reported what he’s hearing out of Chicago on Markkanen, and based on how well the young stretch 4 could’ve been paid if he hadn’t pressed his luck in free agency, he must be disappointed:

Markkanen’s situation with the Bulls isn’t dissimilar to what happened with the Los Angeles Lakers and Dennis Schroder. After turning down a strong contract extension, hoping to make more money this summer, Schroder wound up signing with the Boston Celtics at a huge discount.

Now that the Bulls have gone on such a spending spree to upgrade their roster, they have all the leverage over Markkanen, as the market for him appears to have all but dried up. He could still play in Chicago this next season and prove himself worthy of a big payday, but it’s looking like Chicago was a big winner in this standoff.

According to NBC Sports Philadelphia’s Harrison Sanford, the Bulls are interested in landing free-agent wing Danny Green to join with the likes of Lonzo Ball and DeMar DeRozan.

It’s already been an incredible free agency period for Chicago, but landing a veteran like Green would be an added bonus. He’s a fantastic mentor for someone like Patrick Williams, and provides leadership, depth, 3-point shooting and perimeter defense the Bulls need. 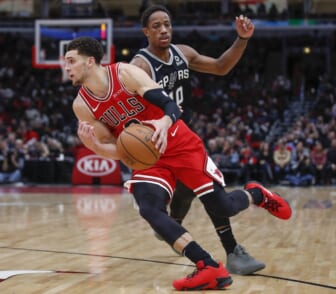 The Los Angeles Lakers guard is reportedly expected to be on the Bulls’ offseason wish list when he hits free agency, per Bleacher Report’s Jake Fischer. Chicago’s interest in Schroder was confirmed in a later report by ESPN’s Brian Windhorst.

Schroder disappointed in LA after a runner-up Sixth Man of the Year campaign in 2019-20 with the Oklahoma City Thunder. Nevertheless, he brings firepower off the bench, perimeter shooting, excellent on-ball defense and would complement Zach LaVine and Coby White extremely well.

It’s just a matter of how much money Chicago is willing to spend to acquire Schroder. Bulls coach Billy Donovan was with Schroder in OKC, so a reunion makes sense if the price is right.

Citing the desire for a dynamic point guard next to Zach LaVine, The Action Network’s Matt Moore reported recently that the Bulls will be “big spenders” on the open market.

Targets Moore referenced to team with LaVine included Kyle Lowry, Dennis Schroder, Lonzo Ball and Spencer Dinwiddie. That’s quite a range of quality in players, and it’s anyone’s guess who the Bulls could lure to the Windy City.

If that is indeed the list Chicago is focused on, Schroder and Ball seem like the best value signings and the most logical long-term moves. Ball is especially dynamic as a passer, while Schroder could be fetched at a bargain since he had something of a down season with the Los Angeles Lakers.

Unless the Bulls can sell Lowry that they’re ready to compete for a championship right away, he likely won’t sign. Dinwiddie is considerably inferior as a player to the other three options posed here. Keep an eye on Ball and Schroder, though.

ESPN.com’s Bobby Marks did an extensive breakdown of the Bulls’ cap situation and key personnel decisions, and of course, Lauri Markkanen was prominently mentioned as he prepares to be a restricted free agent.

Markkanen was never going to be a max-contract player. Whatever he winds up costing should be a relative bargain given that he’s still only 23 and still has upside.

Since Chicago already has Nikola Vucevic, Markkanen is a strange fit personnel-wise, so getting defensive help and more perimeter firepower in a potential sign-and-trade would be clutch.

It’s clear that Chicago needs backcourt help alongside Zach LaVine. Depending on the future of Lauri Markkanen, there will be a clear surplus skewed to the frontcourt with Markkanen and Nikola Vucevic in the fold.

There aren’t any really viable, experienced guards on the roster outside of LaVine, and he only recently ascended to borderline superstar status. That means Chicago must be proactive in upgrading that area. A Markkanen sign-and-trade might help the cause. More on that later.

But before the Bulls go on a free-agent spending spree, they should probably hone in on ensuring LaVine is there for the long haul.

This is more of a morale-boosting, psychologically calming offseason move that the Bulls should make.

Zach LaVine’s career trajectory in terms of purely improving on the court has been on an upward trend during his entire time in the NBA. It culminated in a phenomenal 2020-21 campaign in which he shot 50.7% from the floor, 41.9% from 3-point range and 84.9% from the foul in averaging 27.4 points per contest.

For those who don’t think LaVine’s form is sustainable, consider this anecdote from Bulls Gold, which underscores the legendary company LaVine joined this season:

LaVine is a legitimate franchise player who’s still only 26 years old, and continues improving as a shooter, playmaker and team leader. This is one Chicago shouldn’t overthink. He’s the best player to roll through the organization in a while.

That’s right. Pay him the max contract extension. LaVine is an unrestricted free agent in 2022, and having an uncertain future could cloud his ability to lead the Bulls and put undue pressure on everyone on the team.

Paying him this summer seems out of the question, though. Chicago should ultimately tie LaVine to the Windy City and continue building around him, but with how much the Bulls have spent in free agency, LaVine probably won’t get that new deal until next offseason.

Hopefully that doesn’t prevent him from staying put. Chicago has made a demonstrable push to ensure LaVine they want to build a contender around him.