NBA defensive rankings: Celtics remain at the top heading into the postseason 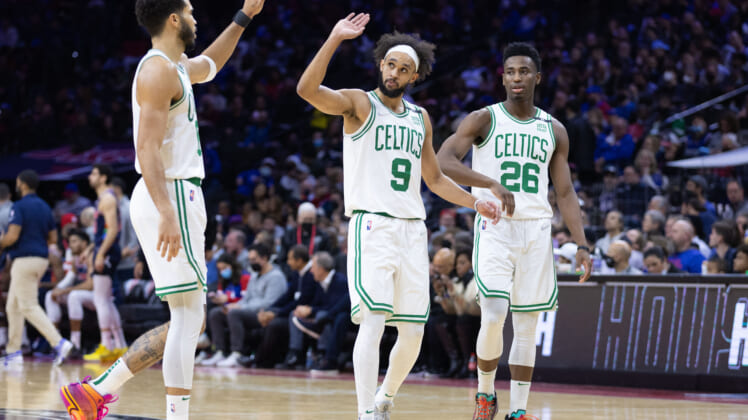 Sportsnaut’s NBA defensive rankings, postseason edition. With 20 teams still standing and the play-in tournament getting under way, defense will be a central focus.

As we have done throughout the 2021-22 NBA season, we provide you our latest NBA defensive rankings. In what can’t be considered too much of a surprise, three of the teams that rank at the bottom here are in the play-in tournament. Meanwhile, five of the top-six teams have to be seen as legit NBA title contenders.

Note: NBA defensive rankings are based on where teams stand from both a points-per game and defensive rating perspective. Lower number the better.

Heading into the play-in tournament, Charlotte ranks dead last in our NBA defensive rankings among teams still standing. For good reason. It has been an absolute disaster on this end of the court, yielding 114.9 points per game while boasting the ninth-worst defensive rating in the NBA during the regular season. Perhaps, LaMelo Ball can shoot and assist the Hornets to the NBA Playoffs. But I wouldn’t bank on it.

With the likes of Clint Capela, one would think that the Hawks might find a way to be respectable defensively. It did not happen during the regular season. Trae Young still struggles on that end of the court. Veterans Bogdan Bogdanović and Danilo Gallinari also leave a lot to be desired. It led to Atlanta giving up north of 112 points per game during the regular season in the lead up to their play-in appearance.

Gregg Popovich is still at the helm, so you know San Antonio is going to be able to figure something out to remain competitive out west. That was the case with San Antonio finishing 14-13 in the final 27 regular-season games to earn a spot in the play-in tournament. Unfortunately, this squad is a shell of its former self defensively. Here’s a unit that gave up north of 120 points in 33% of its regular-season outings. Ouch!

The injury to Lonzo Ball and the fact that Alex Caruso missed 41 regular-season games impacted Chicago defensively. It also has an impact in its standings in our most-recent NBA defensive rankings. In short, the Bulls’ injuries set them back big time. Remember, this was one of the top-five defensive teams in the Association for pretty much the first half of the regular season. Unfortunately, we wouldn’t expect things to dramatically improve in the first round of the playoffs against the defending champion Milwaukee Bucks.

Ben Simmons’ inability to play a single regular-season game with Brooklyn following his trade from the Philadelphia 76ers impacted this team defensively. He’s one of the best all-around defenders in the game. And while both Kevin Durant and Kyrie Irving are plus-level defenders, there’s not enough talent to go around on that end of the court. It led to Brooklyn ranking 20th in defensive rating during the regular season.

Karl-Anthony Towns, Anthony Edwards and D’Angelo Russell all have their limitations on defense. With that said, their scoring prowess coupled with some strong defensive play from the supporting cast has Minnesota on the verge of a playoff appearance. Patrick Beverley and Jarred Vanderbilt are the two anchors on that end of the court.

Jrue Holiday made a huge impact in helping Milwaukee earn the NBA title last season. His defense was absolutely elite. We also know that former NBA Defensive Player of the Year Giannis Antetokounmpo is among the best all-around defenders in the Association. At issue this past regular was was Milwaukee’s inability to make up for the loss of P.J. Tucker. It led to a downtick in terms of points allowed, defensive rating and field goal percentage allowed.

As with the entire Pelicans roster, their defense improved leaps and bounds as the season progressed. Veteran center Jonas Valančiūnas was an absolute force inside. Rookie second-round pick Herbert Jones could actually earn All-NBA Defensive Team honors (2.5 defensive win shares). Whether this translates to New Orleans surprising the masses and making it out of the play-in tournament remains to be seen.

It’s hard to even gauge where Denver is with Jamal Murray and Michael Porter Jr. still sidelined heading into the playoffs. The Nuggets still ranked 14th in points allowed and 15th in defensive rating to close out the regular season. A lot of that had to do with the performance of reigning NBA MVP Nikola Jokić, who is coming off a career-best defensive performance (4.5 defensive win shares, 4.5 defensive plus-minus).

Philadelphia was among the best defensive teams in the NBA this season without Ben Simmons in the mix. That took a step back after it acquired a lackcluster defender in James Harden for Simmons back on February 10.

Even then, there’s a whole lot to like here. Matisse Thybulle earned All-NBA Defensive Team honors last season and has picked his game up even more this year. Joel Embiid and Tobias Harris also rocked on that end of the court during the regular year (combined 7.7 defensive win shares).

After some struggles defensively with Rudy Gobert sidelined, this unit has picked it up heading into the playoffs. Obviously, it starts with Gober inside. However, Donovan Mitchell is no longer the poor defender he was earlier in his career. Mike Conley also continues to play well on that end of the court.

Getting Paul George back has been a boon for the Clippers heading ino the play-in tournament. But we really have to give it to the rest of Los Angeles’ roster with Kawhi Leonard still sidelined and George missing a majority of the regular season. Ivica Zubac, Terance Mann and Nicolas Batum were dynamos defensively. Could it lead to Los Angeles making a surprise appearance in the Playoffs? We’ll find out soon enough.

Is Ja Morant an elite-level defender? The answer to that question is a resounding no. Despite this, Memphis still finished the regular season ranked sixth in defensive rating. That primarily has to do with the otherworldly performances of Steven Adams, Jaren Jackson Jr., De’Anthony Melton and Desmond Bane on defense. It has Memphis as legit title contenders and as one of the top teams standing in our NBA defensive rankings.

The loss of franchise stalwart Kyle Lowry was expected to hurt on defense this season. Having an undersized Fred VanVleet also isn’t an ideal scenario. The presence of likely NBA Rookie of the Year Scottie Barnes has changed this narrative to an extent. We also like what Pascal Siakam and OG Anunoby have brought on that end of the court. With Toronto streaking, its defense will play a major role heading ino Round 1 of the playoffs against the Philadelphia 76ers.

Chris Paul’s elite defense coupled with improvements from Deandre Ayton, Devin Booker and Mikal Bridges on that end of the court has made Phoenix one of the best defensive teams in the NBA. In particular, Bridges should be seen as a top-end NBA Defensive Player of the Year candidate (3.7 defensive win shares in 2021-22).

How improved is Cleveland on this end of the court in 2021-22? No need to look past young big men Evan Mobley and Jarrett Allen. Both ranked in the top 10 of the NBA in defensive win shares to conclude the regular season. Unfortunately, an injury to Allen will keep him out of the play-in tournament. Is Mobley ready for the big stage on that end of the court? We shall find out soon enough.

Dallas has been much better on defense under Jason Kidd that it was with Rick Carlisle at the helm. This unit ranked seventh in defensive rating and second in points allowed to conclude a 52-win regular season. Moving off the liability of Kristaps Porzingis for Spencer Dinwiddie helped here. The same can be said about the improved defensive performance of star guard Luka Doncic. Unfortunately, he suffered a calf injury in the regular-season finale and is questionable to go for Round 1 against Utah. 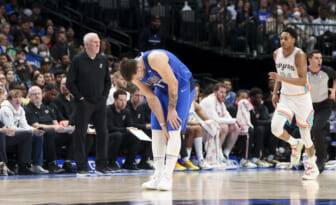 After some major struggles on defense during a down 2020-21 season, Miami improved leaps and bounds in this regard during the summer. Adding grizzled veterans such as Kyle Lowry and P.J. Tucker to the mix has helped big time. Holdovers Jimmy Butler and Bam Adebayo are among the best defensive players at their positions in the NBA. It has Miami heading into the playoffs as the No. 1 seed in the Eastern Conference and legit title contenders.

The Warriors saw a downtick in production on the defensive end of the court when Draymond Green went down to injury back on January 9. However, this unit played great on defense through most of the season and has picked it up at the right time heading into the playoffs. In addition to Green, Andrew Wiggins (3.4 defensive win shares), Stepen Curry (3.4), Kevon Looney (3.2), Jordan Poole (2.9), Gary Payton II (2.6) and Jonathan Kuminga (1.8) were stellar regular-season defenders.

Marcus Smart was fed up over his team’s struggles to open the season. It seems that the rest of his roster has listened to an extent. After ranking 29th on this list earlier in the season, Boston continues to perform well on this end of the court heading into the playoffs. It ranks No. 1 in points allowed and No. 1 in defensive rating. Over the final 34 games of the regular year, these Celtics gave up less than 100 points 15 times. That’s insane.