Luka Doncic injury and impact on the NBA Playoffs 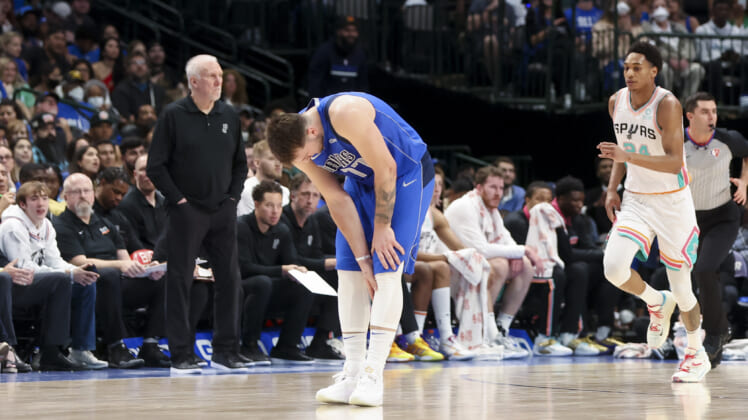 The last thing the ascending Dallas Mavericks needed to see in their regular-season finale was some sort of Luka Doncic injury.

The star guard played Sunday evening against the San Antonio Spurs with Dallas still in the hunt for the No. 3 seed in the Western Conference.

Mavericks head coach Jason Kidd noted after the game that Doncic and his starters would play as long as they had a chance to earn that top-three seed.

Unfortunately, Doncic went down with a leg injury late in the third quarter of Dallas’ 130-120 win over San Antonio. At about the same time, the Golden State Warriors were still playing against the New Orleans Pelicans.

A Warriors loss coupled with Dallas win would have sent the Mavs to the No. 3 seed — avoiding a potential Round 2 matchup with the NBA-best Phoenix Suns. That didn’t come to fruition.

These are the risks that you take. After initially being diagnosed with a left calf strain, the Mavericks confirmed on Monday that’s exactly what the Luka Doncic injury was.

They would not set a timetable for his return to the court. Meanwhile, a source noted to ESPN that Doncic couldn’t be ruled out for Game 1 against the Utah Jazz on Saturday.

It is not yet known what grade calf strain Doncic suffered. That would give us a more concrete timetable for his return once the MRI results are officially released.

There’s three different grades. Typically, a grade two or less severe injury would result in a player being out roughly 16 days. However, Doncic could rush himself back given Dallas’ championship aspirations and his importance to the team.

As one of our top-five NBA MVP candidates to close out the season, it’s obvious that Doncic is important to the Mavericks’ playoff success. However, there’s a lot more that must be taken into account when looking at when the 23-year-old star might return.

This injury is eerily similar to the one Durant suffered in the 2019 NBA Playoffs as a member of the Golden State Warriors.

In Game 5 of their first-round series against the Houston Rockets, Durant suffered a mild right calf strain. Said injury occured on May 8 with KD returning for Game 5 of the NBA Finals against the Toronto Raptors a month later.

The rest is history. After playing in just 12 minutes against the Raptors, Durant suffered a torn right Achilles after grabbing for the same calf he injured against Houston. He would miss the entire following season with the Brooklyn Nets.

That’s the risk of Doncic returning before he’s anywhere near 100%. Dallas has too much invested in him long-term. Meanwhile, the star guard is too good of a player to have a setback similar to the one we saw from Durant roughly three years ago.

Dallas boasted an 8-9 record in 17 games with Doncic sidelined during the regular season. The team was 44-21 with him on the court. That tells us a lot about the young star’s importance to the Mavericks.

Assuming Doncic misses at least a couple games in the first round (if not more), the onus will be on guards Jalen Brunson and Spencer Dinwiddie to pick up the slack.

Both have played exceptionally well this season. In particular, Dinwiddie was great after being acquired from the Washington Wizards for Kristaps Porzingis on February 10. The guard averaged 15.8 points, 3.1 rebounds and 3.9 assists on 40% shooting from distance in 23 games with Dallas.

However, it must be noted that a lot of that work came with Doncic taking the focus of the defense. Can Dinwiddie succeed as a true No. 1 scoring option?

Dallas’ first-round matchup comes against a Jazz team that posted a 28-10 record to start the season, only to finish up 21-23 in its final 44 games.

Even if the Mavericks were to advance past Round 1, there’s no guarantee that the Luka Doncic injury would enable him to return for the conference semifinals. More likely than not, said series would come against a Suns team that won 64 regular-season games and is the odds-on favorite to win the Western Conference.