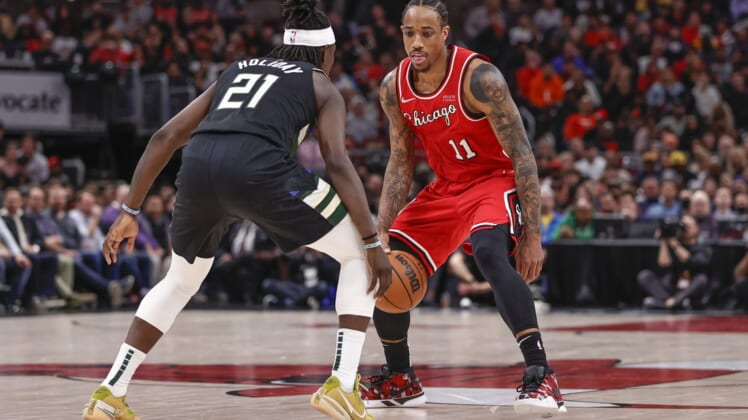 The Eastern Conference playoff picture came into focus Sunday evening, as the Boston Celtics snagged the No. 2 seed, while the defending champion Milwaukee Bucks claimed the No. 3 seed and the Philadelphia 76ers settled in as the fourth seed.

The top overall seed in the East will be the Miami Heat (53-29), who will take on the yet-to-be-determined No. 8 seed upon the conclusion of the play-in tournament. Boston will face the No. 7 seed, which also will be decided via the play-in tourney.

The two solidified first-round matchups in the East will be Giannis Antetokounmpo and the Bucks (51-31) against the sixth-seeded Chicago Bulls (46-36), and the 76ers (51-31) versus the fifth-seeded Toronto Raptors (48-34).

The East play-in tournament will begin Tuesday with a matchup between the Brooklyn Nets and Cleveland Cavaliers, both of whom finished 48-34 in the regular season. The winner of that game will be the Celtics’ opponent as the No. 7 seed.

The Atlanta Hawks (43-39) and Charlotte Hornets (43-39) will play Wednesday with the winner advancing to face the loser of the Nets-Cavaliers tilt on Friday. The winner of Friday’s affair will be the No. 8 seed in the East.

In the Western Conference, the league-leading Phoenix Suns (64-18) long ago clinched the No. 1 overall seed and home-court advantage throughout the playoffs. The upstart Memphis Grizzlies are the second seed in the West after a surprising 56-26 campaign.

The Golden State Warriors (53-29) clinched the No. 3 seed in the West with a win Sunday night, setting up a first-round matchup against the No. 6 seed Denver Nuggets (48-34) and MVP favorite Nikola Jokic. The 4-5 matchup in the West features the Dallas Mavericks (52-30) with home-court advantage against the Utah Jazz (49-33).

The first-round opponents for both the Suns and Grizzlies will be determined via the West play-in tournament. The Minnesota Timberwolves (46-36) and Los Angeles Clippers (42-40) are the top two seeds in the West play-in field, with the New Orleans Pelicans (36-46) and San Antonio Spurs (34-48) also scrambling to get into the Round of 16.

Saturday begins with four Game 1s, including Mavericks-Jazz, 76ers-Raptors and Warriors-Nuggets. The Bucks-Bulls series tips off Sunday, along with three other games.