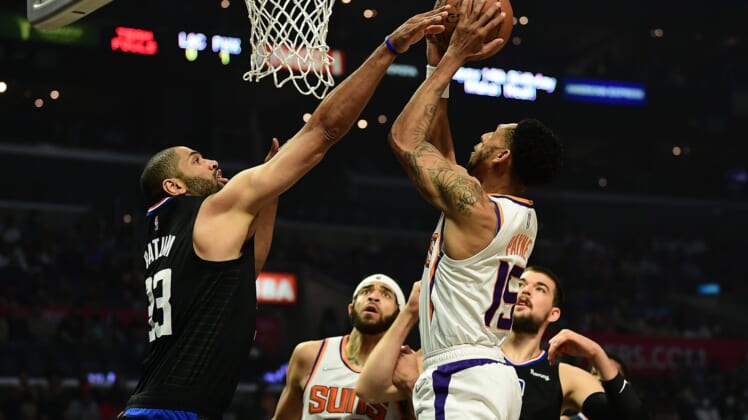 Norman Powell scored 24 points in his return and Paul George had 19 as the Los Angeles Clippers earned a 113-109 victory Wednesday over the visiting Phoenix Suns, who sat four starters.

Powell missed 22 games for the Clippers (40-40) with a broken foot and came back to open 6 of 6 from the field, while playing 23 minutes. He played just three games with the Clippers after a trade from the Portland Trail Blazers when his injury occurred.

Ish Wainwright scored 20 points and Aaron Holiday added 16 for the Suns (63-17), who played without Devin Booker, Chris Paul, Deandre Ayton and Jae Crowder. The absences were characterized as a maintenance day after the Suns wrapped up a franchise-record 63rd victory Tuesday.

The game was of little consequence in the playoff chase. The Suns already wrapped up the top spot in the Western Conference and the Clippers are locked in as the eighth-place team with a spot clinched in the play-in tournament next week.

George’s production came in just his fourth game back from a tear in his right elbow that forced him to miss 48 of 50 contests. Star Kawhi Leonard (knee) has not played this season, but has ramped up activity at the team’s practice facility. George and Powell were playing together for the first time in a Clippers uniform.

The Clippers led by as many as seven points in the first quarter and were up 60-31 at halftime. It was the Suns’ lowest scoring first half this season.

George passed the 15,000-point mark for his career in the second quarter.

Phoenix rebounded to score 48 points in the fourth quarter after scoring just nine in the second. After trailing by as many as 39, the Suns cut the deficit to single digits in the final minute.

Clippers sharpshooter Luke Kennard was not available because of a hamstring injury.