Bookmark. Save. Do your thing. We will be providing constant updates on this page as it relates to the biggest NBA trade rumors this summer.

While there’s still every expectation that Leonard will return to the Los Angeles Clippers in free agency, he has yet to sign on the dotted line. The two-time NBA Finals MVP is expected to miss the entire 2021-22 season with a partially torn ACL. Perhaps, that’s led to a slowly-evolving situation. Short of Leonard taking a visit with other teams, we’re still looking at him returning to Los Angeles.

These are the players Los Angeles has brought in over the past week, including the blockbuster trade for Russell Westbrook late last month. The Lakers also re-signed stud young restricted free agent Talen Horton-Tucker to a three-year, $32 million contract. Los Angeles’ rotation is going to be something else next season.

After an inactive first two days of free agency, the Warriors are hitting the bargain bin on the open market. They are also reportedly interested in Utah Jazz veteran sharpshooter Joe Ingles in a trade. The 33-year-old forward has been put on the block after averaging 12.1 pints and 4.7 assists on 45% shooting from three-point range last season. It remains to be seen how a deal would work out here with Ingles set to count $13.04 million against the cap in 2021-22.

According to ESPN’s Ramona Shelburne, there’s now three teams in on Golden State Warriors free-agent forward Kelly Oubre Jr. That includes the New York Knicks, San Antonio Spurs and Dallas Mavericks. Coming off a ho-hum season with Golden State, Oubre is still looking at between $15-20 million annually. All three teams could have the cap room to add him. With that said, the market has been slow going for Oubre. There’s now a chance that he returns to Golden State.

The Chicago Bulls extended a qualifying offer to Lauri Markkanen, giving them the ability to match any contract he receives. A sign-and-trade is the likely outcome this summer and HoopsHype’s Michael Scotto reports the Minnesota Timberwolves, San Antonio Spurs and Oklahoma City Thunder all have the 2017 first-round pick on their radar.

It’s not a surprise that Indiana pulled off a trade in the first round of the 2021 NBA Draft. However, it is a bit of a shock that the team didn’t trade down from 13. Rather, the Pacers selected Oregon sharpshooter Chris Duarte. Then, they moved to the 22nd pick to acquire big man Isaiah Jackson — yielding Aaron Holiday in the process. This seems to suggest that another trade could be in the cards given Jackson plays the same position as Myles Turner, who has been on the block. It’s something to pay attention to with free agency now taking a back seat to NBA trade rumors. 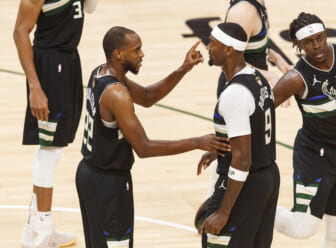 After a couple weeks of trade rumors following their first-round exit in the NBA Playoffs, it appears that Washington is going to retain Beal for at least one more season. While this is bad news for teams like the Golden State Warriors, it does set up an interesting summer in D.C. The Wizards ended up acquiring veterans Kyle Kuzma, Kentavious Caldwell-Pope, Montrezl Harrell and Aaron Holiday in separate trades that sent Russell Westbrook to the Los Angeles Lakers. General manager Tommy Sheppard has some decisions to make.

There’s now a very good chance that Simmons will be moved much later in the summer. According to ESPN’s Adrian Wojnarowski, Philadelphia is seeking out trade partners with Simmons’ camp now believing that a move is in his best interests. Unfortunately, the 76ers’ asking price is seemingly too high for other teams to consider.

Woj dropped a bomb, indicating that Philadelphia is seeking a James Harden-type of return for Simmons. That means multiple first-round picks, other pick swaps and young players. Given Simmons’ struggled in the playoffs, it remains to be seen if any team will be willing to offer up that type of return.

Just a couple years after selecting Reddish with the 10th pick in the 2019 NBA Draft, the Hawks are looking to move off the young wing. According to multiple media reports, Atlanta is open to trading Reddish for what would likely be a non-lottery selection in a future draft.

Reddish, 21, still offers a tremendous amount of upside for interested teams despite missing all but 26 games this past season to injury. The Duke product is averaging 10.7 points and 3.8 rebounds on 38% shooting from the field during his two-year career.

NBA trade rumors: Pascal Siakam could be on the move

Recent reports suggest that the Toronto Raptors are willing to move this star forward after a down season for both Siakam and the organization. It’s really all about whether Toronto’s brass wants to tear this thing up and start anew with a rebuild after drafting another forward in Scottie Barnes fourth overall. Siakam, 27, averaged 21.4 points, 7.2 rebounds and 4.5 assists on 46% shooting from the field in 2020-21. Among other teams, he’s been linked to the Golden State Warriors in trade talks.

Reports surfaced late last month that Lillard was on the verge of requesting a trade. Talking from the site of the Team USA training camp in Las Vegas, the future Hall of Famer guard denied said report.

“It’s not true I haven’t made any firm decision on what my future will be,” Lillard told reporters.

In no way is this a sign that Dame has committed to Portland. He wants a sense of urgency from the embattled organization and just recently met with the power that be, new head coach Chauncey Billups included.

There’s a chance that Lillard will in fact request a trade should things not turn out to his liking. The report Lillard responded to listed the Golden State Warriors, Miami Heat, New York Knicks and Los Angeles Lakers as his preferred destinations.