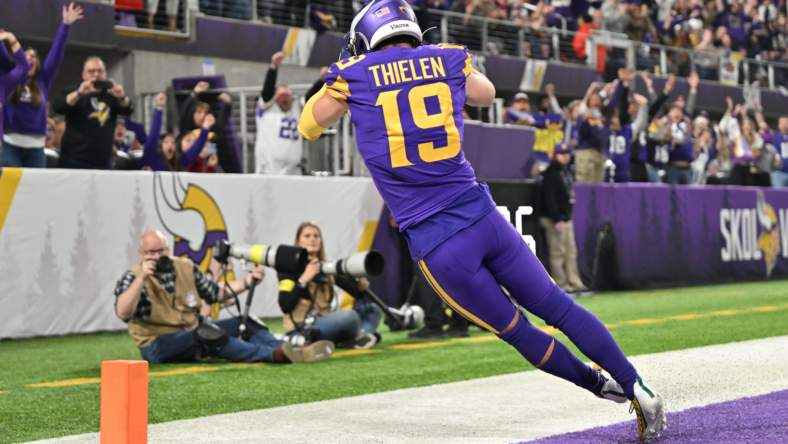 The New England Patriots were on the road at U.S. Bank Stadium to take on the Minnesota Vikings on Thanksgiving Day in what was expected to be the lowest-scoring game of the day. Only, that’s not what we got at all. Instead, for the first John Madden Thanksgiving celebration, the NFL saved the biggest fireworks for last.

If you were hoping to doze off to sleep after a warm, hearty meal, well at least tomorrow’s Friday. For those who powered through, we saw a high-octane back-and-forth scoring duet that culminated in a Vikings victory.

As usual, there were several winners and losers throughout the game, we narrowed it down to five who ultimately swung the outcome on Thursday night. Grab your forks and spoons, because it’s time to dive in.

Looking for a spark, the Vikings got an unexpected boost from an unlikely contributor. This time it was second-year pro Kene Nwangwu, who rarely sees the field offensively. But he didn’t wait around for an opportunity to come to him. Instead, he went out and stole one.

Just after the second half, Nwangwu received a kick with the Vikings trailing 23-16 and took matters into his own hands. Nwangwu returned the kick 97 yards, seemingly untouched, for the tying touchdown.

It’s Nwangwu’s third kick return touchdown of his career, and he’s now at an incredible pace as far as returners go. With that score, Nwangwu now averages a touchdown on one of every 13.7 times he takes a return. Cordarrelle Patterson, who just set the NFL record for most career kick return touchdowns in history, averages one on every 29.3 returns.

He doesn’t get the ball much, but when the former Iowa State product gets some space, his world-class speed shows up big-time. We saw that on full display on Thursday night.

Matt Judon was expected to be a big x-factor coming into the matchup. He leads the NFL with 13 sacks. There have only been two games all season where the three-time Pro Bowl linebacker didn’t get a QB sack. Scratch that. Now there have been three games.

Judon, going up against a backup left tackle who played just 79 snaps all season and had yet to make an NFL start, didn’t record a sack. Judon recorded three tackles, but he did get two QB hits, they just didn’t amount to anything. Josh Uche got the only New England sack on the day. Meanwhile, the Vikings managed to get to Mac Jones three times.

Another big storyline coming into the game was how the Patriots would handle themselves offensively. The running game was never really in question, as the Pats have a stable of backs who can get the job done.

Moreso, the pressure was on second-year pro Mac Jones. The Patriots have been searching for a way to get more big plays, but that wasn’t a problem at any point on Thursday night, where Jones routinely came up with game-changing throws.

In all, Jones completed 28-of-39 passes for 382 yards, averaging close to a season-best 9.8 yards per attempt, while also passing for two touchdowns. They didn’t get the win today, but Patriot fans have to like what they saw from the 2021 first-round pick in Minnesota.

The Vikings came into the matchup without their All-Pro left tackle Christian Darrisaw. OK, he’s yet to receive such honors, but he’s playing at an elite level this season. In turn, the Vikings had no choice but go to the next man up, who was Blake Brandel, a 2020 sixth-round pick who had never started an NFL game until Thursday.

Brandel handled himself well, not letting up any sacks, which is an impressive feat considering his opponent. We saw the Vikings get manhandled last week, taking on a ferocious Dallas pass rush that records more sacks and pressures than any other NFL team. This week was another huge challenge with the Patriots, who get the second-most pressures and sacks.

Only, the end result was much different. Kirk Cousins played with his head on a swivel, stepping up and maneuvering in the pocket when needed, getting the ball out quickly. In the end, he kept clean and still managed to find enough time to connect with Justin Jefferson all night long.

Most importantly, Cousins got a win in primetime against the NFL’s second-best defense coming into the night. Captain Kirk is now 11-18 in primetime action under the lights.

In the ever-so-unpredictable game of football, we just never know what to expect. Yet lately, the one thing that seems certain is that Justin Jefferson will likely have a big day. He came into the matchup averaging 109.3 receiving yards per game, trailing only Tyreek Hill’s 114.8 per contest.

It didn’t take long for Jefferson to make an impact. Before we could even realize it, Jefferson had already recorded the 21st 100-yard day of his young career and also set another record. Adding 139 yards and a touchdown on nine catches, Jefferson now has 1,292 receiving yards, leading the NFL.

As to the record, Jefferson now has the most receiving yards of any receiver through a player’s first three seasons in NFL history. Yet he still has six more games to go this year, giving the outstanding pass-catcher a chance to really put this record out of reach.