The Las Vegas Raiders took the San Francisco 49ers to overtime in Sunday’s thrilling matchup but ultimately came up just short in another close loss. Fortunately, there were some positives to take away from this explosive game.

Quarterback Jarrett Stidham made his first NFL start and played brilliantly against one of the best defenses in the NFL. With Derek Carr out of the picture, the Raiders’ offense suddenly looked like the high-scoring attack fans expected coming into the season.

However, a team prone to making mistakes on both sides of the ball saw it cost them against a Super Bowl contender. It resulted in Sunday’s last-second loss, but there are still performances on both sides to reflect upon.

Here are four winners and losers from Sunday’s matchup.

The Christian McCaffrey trade has done wonders for San Francisco’s offense. Coming into Week 17, the All-Pro offensive weapon compiled 1,131 scrimmage yards and nine total touchdowns in 10 games with his new team. On Sunday, Las Vegas served as host for the generational talent.

McCaffrey effectively carried the offense to 37 points. He turned 19 carries into 121 rushing yards and a score, averaging 6.4 yards per carry with multiple explosive runs. He also played a massive role in the passing game, drawing nine targets on Bruck Purdy’s 35 attempts. In total, McCaffrey turned 25 touches into 193 scrimmage yards and a score.

Purdy is certainly an important part of the 49ers’ success as of late, but McCaffrey plays a role in everything. Acquiring him came at a heavy cost, but he made up for it weeks ago and his influence could lead to a Super Bowl.

Injuries have taken a toll on the defense in Las Vegas. The Raiders played without Denzel linebacker Denzel Perryman, defensive end Chandler Jones and cornerback Rock Ya-Sin on Sunday. Against an offense with elite athletes and a brilliant paly-caller, the holes were clear.

One of the worst pass defenses in the NFL now didn’t even have the benefit of a quality pass rush. Las Vegas failed to record a single sack and it registered just three QB hits across 35 pass attempts by the 49ers. 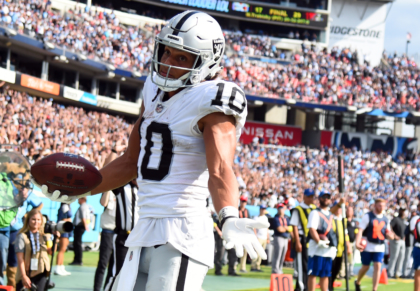 In one of the few positives, Maxx Crosby had two tackles, making him just the fourth NFL defensive lineman since 1999 and first since 2013 to have more than 80 tackles combined with 20 tackles for loss in a single season.

Since being traded to Las Vegas in May, Stidham has mentored his teammates with the offensive scheme after being in New England with Raiders head coach Josh McDaniels for a few years. In his first start, Stidham demonstrated that mastery of the offense.

The 26-year-old quarterback was able to connect with six different pass catchers at least three times each as the Raiders totaled 500 yards of offense, which was the second-most yards the 49ers have allowed all season.

McDaniels said Stidham found his rhythm early as he became the first Raider in 12 years and fifth since 1991 to have more than 175 total yards, at least two touchdowns and a passer rating above 149 in the first half.

Even with his best friend and Pro Bowl quarterback on the sideline, Davante Adams decimated San Francisco’s secondary with Stidham under center.

This is Adams’ eighth game this season with triple-digit receiving yards, which is now the most in a single season in franchise history. In addition, he now leads the NFL in receiving touchdowns (14) and it’s the second-most for him in his career.

Adams, who has at least 13 touchdowns in three of the last five seasons, is one of eight players in NFL history with a minimum of three seasons recording at least a baker’s dozen worth of touchdowns.

One of Adams’ two scores came on a fade route as Stidham gave him a perfectly placed ball. All Adams had to do was catch the ball and keep his feet in bounds, which he did with 10 seconds to spare before halftime.

Adams also delivered during the team’s two-minute drive at the end of regulation. The Raiders faced first-and-20 and inside of the two-minute warning. Stidham, who also found Adams for a 60-yard touchdown, was able to find him again as Adams had to reposition himself and dive in order to complete the 45-yard play.

The 30-year-old, who also broke the single-season franchise receiving record, said he was not surprised by Stidham’s performance because of the preparation he puts in every week, no matter if he is starting.