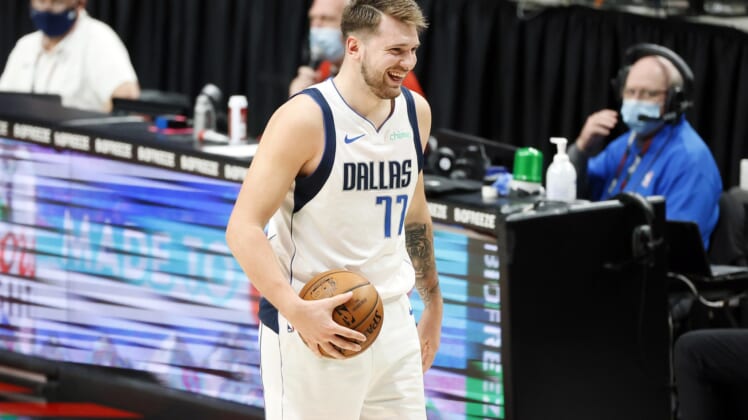 After Sunday’s 40-point shellacking of the Portland Trail Blazers, the Dallas Mavericks have won 14 of their last 18 games.

The Mavericks have rebounded from a slow start to become one of the hottest teams in the NBA. These are the four areas Dallas has most notably improved on amid its recent stupendous stretch.

For much of the first half of the season, the Mavericks owned the league’s worst 3-point percentage. To make matters worse, Dallas spent most of the season in the top five for trey attempts. The formerly high-flying offense was sputtering, leading to a six-game losing streak.

During their winning run, the Mavs shot the lights out, moving from last to a respectable 16th in 3-point percentage. Leading the team is Maxi Kleber, shooting a phenomenal 47%.

Perhaps more surprisingly, Luka Doncic is showing remarkable improvement in his shooting stroke. The Slovenian began the season bricking 33 of his first 41 jumpers from beyond the arc, good for 19.5%. After hitting 45% of his threes in February and eight of nine against the Trail Blazers, Doncic is now shooting a respectable 37%.

If he continues to improve on the only offensive hole in his game, Doncic will somehow become an even better scorer, and the Mavs’ offense will be almost unstoppable.

Before their run, the Mavericks ranked 29th on defense. Even more disappointing, Dallas made a point of improving defensively with their offseason moves.

Now at the halfway point of the season, the Mavs are seeing the fruits of their labor. Over the last 15 games, they’re ranking in the top half of the Association in defensive rating.

Josh Richardson was brought in to defend the opposition’s best player. Against the Trail Blazers, Richardson proved his worth. The shooting guard hounded Damian Lillard throughout the two game series. He forced Lillard into a 7-for-16 shooting night, including zero makes on seven attempts from 3-point range.

The rest of the team has also improved defensively, but, if Richardson plays like he did against Lillard, the Mavericks can become championship contenders.

Porzingis missed three games in a row, fueling trade rumors that the Mavericks were ready to offload the Latvian center. Instead, Porzingis has stayed in Dallas and is having one of his best stretches in a Mavericks uniform.

After missing five weeks with various injuries, Porzingis is posting career highs in effective field goal percentage, true shooting, points per shot attempt and at rim, mid-range and two-point conversion rates. He’s still averaging just 19.7 points with 8.6 rebounds, both numbers Dallas and Porzingis want to be higher. However, his mere presence alleviates pressure from Doncic and he stretches the floor in a way few bigs can.

Despite the improved play of Porzingis, most Mavericks fans would say the team’s second-best player this season is either Jalen Brunson or Tim Hardaway Jr., both of whom come off the bench.

Brunson has been the big surprise. On a team full of spot-up shooters, Brunson is one of the few players that can create his own shot. The third-year guard is nearly shooting 50/40/90 in the opportunities he’s getting, while averaging career-highs in attempts. When Doncic goes to the bench, Dallas has relied on Brunson to run the offense. So far, he’s come up huge for the Mavs.

Originally salary filler in the Porzingis trade, Hardaway has lived up to his formerly onerous contract. After beginning the season in the starting lineup, the former Michigan man moved to the bench, where he’s become a candidate for Sixth Man of the Year.

Since moving to the bench, Hardaway is averaging almost 16 points per game and shooting 39% from deep. His defense and shooting have lifted the Mavericks, especially on days where Porzingis has struggled. Against all odds, Hardaway has become the Mavs No. 3 scorer despite not cracking the starting five.

In the competitive West, the Mavericks are only the 8th seed. However, statistics show Dallas has the easiest second-half schedule in the league. If they keep up their current level of play, the Mavs will improve their seeding. It may not be enough to escape the play-in game, but no team wants to face this dangerous, upgraded version of the Dallas Mavericks.