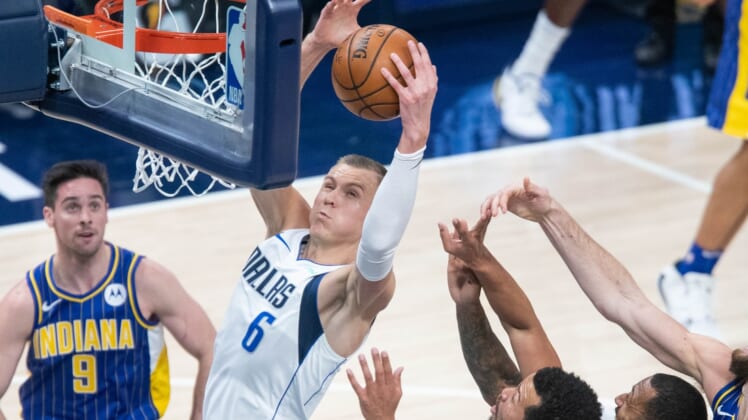 NBA rumors have linked the Dallas Mavericks to potential upgrades behind star guard Luka Doncic. As of right now, it does not appear as if big man Kristaps Porzingis is that second star to lead Dallas to championship contention.

The injury-plagued center has missed 11 games to injury this season. Heck, he’s suited up in a mere 122 games since the end of the 2016-17 campaign with the New York Knicks.

Short on assets to move as they attempt to find more for Doncic to work with, it appears that the Mavericks might very well move off Porzingis altogether.

“They’ve definitely sniffed around on him,” an assistant general manager told Bleacher Report’s Jake Fischer recently. “They’re taking the temperature, because they know at some point it’s gonna come around.”

This would certainly qualify as some surprising news. It was two years ago last month that Dallas pulled off the blockbuster Kristaps Porzingis trade with the New York Knicks. He was sidelined to injury at that point, leading to some questions about whether the trade made sense.

Through his first 17 appearances this season, Porzingis is averaging north of 20 points to go with 8.2 rebounds on 47% shooting from the field. However, he’s also proven to be a liability on the defensive end. It has had a major impact on the Mavericks giving up nearly 115 points per game during a pedestrian 13-15 start to the season.

“It looks like it’s impossible for him to get in a stance. He looks like a scarecrow out there,” one Western Conference executive said about Porzingis. “You don’t expect him to necessarily be great from the jump, but I’ve watched Porzingis a couple of times this year, and I’m not sure the guy can guard anybody.”

It could easily be said that Dallas is wasting Luka Doncic’s otherworldly talents. Still only 21 years old, he’s in the midst of an MVP-caliber season — averaging 29.1 points, 8.6 rebounds and 9.4 assists per outing. With him leading the charge, Dallas is averaging nearly 113 points per.

Could the Mavericks trade Kristaps Porzingis?

Given his issues on defense and injuries, it’s hard to imagine Dallas receiving a huge return in a potential Kristaps Porzingis trade. This is magnified by the fact he’s playing under a five-year, $158.3 million contract.

Even then, it was just a couple short years ago that the still-young 25-year-old Porzingis was billed as the next great NBA player. He still has unlimited ability on the offensive end of the court. And as the big man recover more from the ton meniscus he suffered last season, the defense is surely to improve.

After all, here’s a guy who averaged 22.7 points and 6.6 rebounds with the Knicks back in 2017-18. He has not lost that ability. It should lead to further NBA rumors suggesting that the Unicorn could be moved.

Of course, that’s dependent on the Mavericks’ brass believing Porzingis is not that second start to help Doncic lead the organization to title contention. It appears that they could be nearing that point right now.