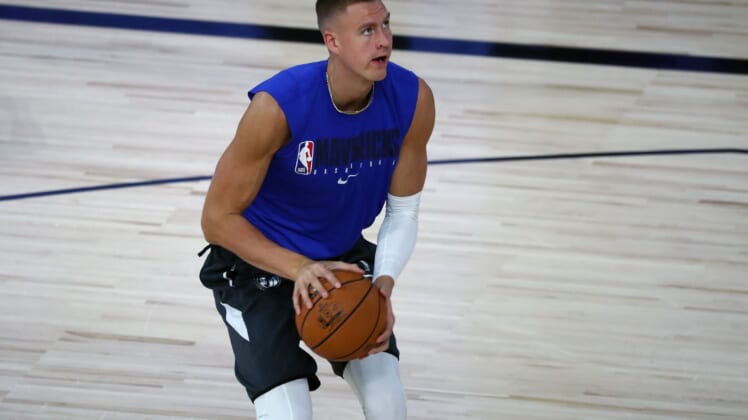 With both Dallas and Porzingis currently underperforming expectations, some are beginning to question if the Mavericks made a mistake. However, looking at the factors surrounding the trade, Dallas is the clear winner of the blockbuster deal, even with much of Porzingis’ career still to play out.

1. Kristaps Porzingis made up for Mavs’ free agency failures

Despite many attempts from Mark Cuban, Dallas has never been an attractive free agency spot. After winning a championship in 2011, the Mavericks blew up the title team in an effort to create cap space for marquee free agents. However, players such as Dwight Howard, Deron Williams, Hassan Whiteside, and, most famously, DeAndre Jordan have all turned Dallas down.

The reasons why free agents reject Dallas are unclear. Perhaps Cuban’s personality might turn off players, but Dirk Nowitzki being on the wrong side of 30 for the last decade may have been a contributing factor as well.

In any event, Dallas was unlikely to land a free agent as good as Kristaps Porzingis if recent history was any indication, so swinging a trade seemed like the next logical move. It’s paying massive dividends to say the least.

When the Mavericks took Dennis Smith Jr., fans hoped he’d be the franchise’s next superstar after Nowitzki’s retirement. He showed flashes of brilliance in his first season, making an All-Rookie second team. Smith was set to lead the offense in his sophomore season — until Dallas drafted Luka Doncic. The Slovenian was immediately a sensation, forcing Smith to take a backseat.

Smith struggled playing off ball with Doncic and clearly didn’t have a role in the offense. Before the Porzingis trade manifested, Dallas was shopping Smith around the league. The athletic guard has struggled ever since — and briefly going to the G-League, before the Knicks traded him to the Detroit Pistons for Derrick Rose. Sending a misfit piece as part of the package for an All-Star under the age of 25 is great business.

3. The price was right, and the New York Knicks got fleeced

After Porzingis requested a trade, the Knicks prioritized receiving draft capital and cap space for the 2019 free agency. For the Mavericks, this meant giving up Smith, Jordan, Matthews, and two first round picks. As mentioned above, Smith was on the trading block, but Jordan and Matthews were also unlikely to be in Dallas beyond the 2018-19 season.

Jordan, signed the previous offseason on a one-year deal, didn’t live up to his $24.1 million contract. Matthews similarly played below expectations for the life of his four-year, $70 million deal. Once it became clear Doncic was a superstar, the Mavericks’ future became radically different and did not need to include Smith, Jordan, or Matthews. The latter two now play for championship contenders, as Jordan is in Brooklyn, while Matthews is on the reigning champion Los Angeles Lakers.

Before the season began, few expected much value out of this pick for the Knicks. However, the Mavericks’ slow start has increased the Knicks’ chances of getting a high lottery spot. That being said, Dallas should be able to right the ship. Expect this pick to fall in the mid-teens, just inside or outside the lottery. Even if the pick falls into the top 10, though, the Knicks will struggle to find a player as promising as Porzingis.

Initially considered salary filler, Hardaway and Burke have been valuable rotational pieces for Dallas. Hardaway, known to shoot inefficiently with the Knicks, shot a career-high 40% from deep in his first full season. His reliability from beyond the arc was a major factor in the Mavericks having the highest offensive rating in NBA history last season.

Even as the Mavs have struggled to shoot this season, Hardaway is still hitting treys at a 39% clip, one of the few players to not see a significant regression in that area. When he was traded to Dallas, Hardaway’s contract was considered to be bad value, but he’s played so well that the Mavericks may re-sign him this offseason for a similar price.

After leaving Dallas in free agency in 2019, Burke returned in the bubble, replacing the injured Jalen Brunson and took advantage of the opportunity, scoring 31 points and making a personal-best eight 3-pointers in one epic outing. Burke impressed for the duration of the bubble and earned a three year, $10 million contract. Burke provides instant offense off the bench, is able to drive, get to the line and can make extremely tough shots from anywhere on the court.

Both Burke and Hardaway have contributed immensely to the Mavericks’ recent resurgence of sorts — an unexpected bonus from the Porzingis trade.

5. Kristaps Porzingis is only beginning to realize his potential

Kristaps Porzingis has not been a runaway success in Dallas. He’s currently shooting a career-low 31% from beyond the arc and struggling to rebound and play defense at center. His tough start to the season can be attributed to his off-season knee surgery, which suggests he’s rusty, but more importantly, leads to the big question mark looming over Porzingis.

Since signing his max contract for the Mavericks, Porzingis has missed 37 out of a possible 107 games. For a second star as part of a hopeful championship core, that’s an unacceptable amount of time to miss.

With that being said, Porzingis has already shown signs of improvement, scoring 27 points on 57.1% shooting from three in a win on Feb. 8 against the Minnesota Timberwolves. This was much closer to his bubble performance, where he averaged 30.5 points, 9.5 rebounds, and 1.5 blocks per game. This is the Porzingis the Mavericks expected when they made the trade.

If he manages to stay healthy enough, Porzingis should begin to truly cement himself as one of the NBA’s elite big men.

Even with his injury problems, Porzingis has shown enough to where the Mavericks can feel confident about the future. In looking at all the angles of the ambitious trade it took to get him, Dallas should be really happy with its bold move to land Porzingis.