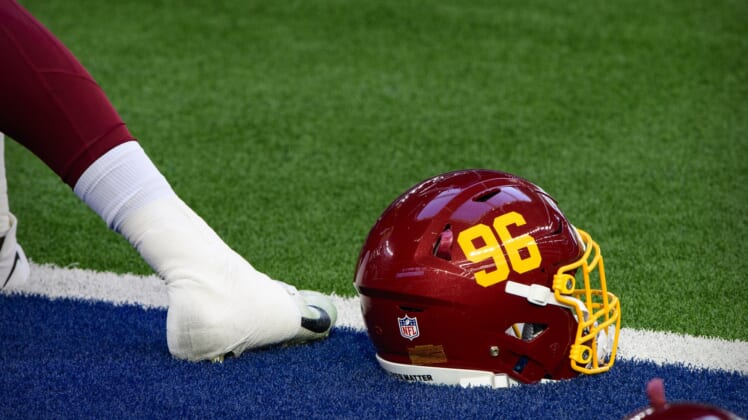 The Washington Football Team has dipped its toe in the quarterback carousel this offseason, signing Ryan Fitzpatrick and exploring trades for a variety of other options. As the 2021 NFL Draft approaches, Washington could be planning something even bigger.

After making the playoffs this past season following a four-year hiatus, the WF owns the 19th overall pick in the upcoming draft. It’s a great position to be in for a quality left tackle, wide receiver, or defensive player. However, the WFT isn’t within striking distance of one of this year’s top quarterbacks.

The cost of trading up is high. For the San Francisco 49ers to climb up to No. 3 overall, they had to send the No. 12 overall pick, 2022 first- and third-round picks and a 2023 first-round pick. The Miami Dolphins knew Kyle Shanahan wanted a quarterback and the cost to acquire him was seismic.

Under a revamped front office, Washington knows it will cost multiple years of draft capital to even be in a position for a top quarterback prospect. However, based on the latest NFL Draft rumors, it seems that might be a price they are willing to pay.

According to The Athletic’s Michael Lombardi, Washington could be the next team to unload all their picks to land a potential franchise quarterback. Specifically, they love North Dakota State star Trey Lance and could be willing to go and get him when the 2021 NFL Draft rolls around.

What would it cost to trade up for Trey Lance?

If Washington stands any chance at Lance, it almost certainly needs to trade up for a top-10 pick. The Detroit Lions are a threat to take a quarterback No. 7 overall and the Denver Broncos are scouring this year’s draft class for a potential Drew Lock replacement. Those are things this front office must keep in mind as it considers where to climb up.

The Atlanta Falcons are open to trading the No. 4 pick, actively taking calls. Atlanta would like a quarterback for the future, but it still believes in Matt Ryan and needs draft capital for a looming rebuild. Based on the increasing cost of quarterbacks, moving into the top five would be expensive.

Washington could take its chances and wait longer. The next realistic scenario is the 7th pick. Detroit is also willing to move down, especially since they are in an actual rebuild. If Lance is still on the board, this is another spot where the WFT could move up for a cost.

Following the Sam Darnold trade the Carolina Panthers are another trade-down candidate and might be more receptive. After that, Washington will likely have to sit back and wait. The Dallas Cowboys won’t help their division rival land a potential franchise quarterback and the New York Giants won’t trade down. If Lance makes it to the 13th pick, the Los Angeles Chargers might be receptive to a deal.

The more Washington waits, the higher the risk Lance is gone. If this is a quarterback the front office truly believes in, it likely needs to acquire a top-eight pick by draft day. Otherwise, this team might just have to roll with Fitzpatrick and Taylor Heinicke in 2021.