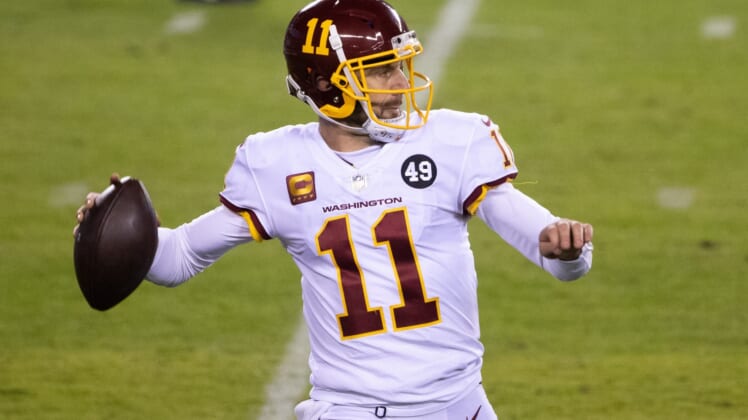 Alex Smith staged one of the greatest comebacks in major sports history last season as he recovered from a life-threatening leg injury, led the Washington Football Team to a 5-1 record when he started and played a big role for the NFC East champions.

In a recent interview, Smith expressed optimism about his football future and implied he could see himself playing in 2021.

On The Ringer’s 10 questions with Kyle Brandt podcast, the 36-year-old Smith explained why he thinks he can still get it done on the gridiron and could come back even stronger next season, per NFL Media:

“I had no idea how my leg and body would respond to the combination of being out for two years and the injury and the limb salvage and all that stuff; I’ve got to wear a brace to do anything.

Smith added that he’s not in a hurry to decide on whether or not he’ll retire. He also pointed out how the injury he suffered that kept him out of Washington’s playoff loss to the eventual Super Bowl LV champion Tampa Bay Buccaneers isn’t related to his severe leg injury.

Far be it from anyone to doubt Smith at this point, but there are some aspects of his game that were impacted hard by his injury and the rust he had to knock off. That hinders his chances to land a starting job in the nation’s capital or with any other NFL team going forward.

Can Alex Smith start for Washington Football Team in 2021?

Whether or not Smith remains with Washington is a matter of what the Football Team’s plans are at quarterback, and whether Smith will have a legitimate chance to compete to be atop the depth chart.

As things stand right now, the only real competition on the Football Team’s roster is Taylor Heinicke, who signed a two-year contract extension and played extremely well on Super Wild Card Weekend. Heinicke seemed to elevate the play of the supporting cast around him, whereas Smith was managing the game and not getting a ton of production out of the passing attack.

To play devil’s advocate to that quickly: the Buccaneers’ championship-caliber defense had nary any NFL game tape on the journeyman Heinicke, and he frankly surprised everyone with how well he played.

Smith was always a quarterback with borderline arm talent, but he did bring athleticism and running ability to his game. His velocity and arm strength declined from where they were before his injury, and Smith barely ever took off to extend the play with his legs, much less pick up yardage on the ground like he used to.

But like Smith said, he felt that his body and leg responded extremely well to the point of surprising him throughout last season. The difficult thing to determine is whether Smith was on his last legs as a player in 2020, or if he truly does need more time to continue rehabbing, building strength in his leg and actually has a chance to regain his full physical faculties as a passer and runner.

If he can get back somewhere near 100%, which he obviously wasn’t last season, it’s possible Smith could be Washington’s best quarterback option in the near term. Should a starting gig not be in the cards anymore, Smith is the ideal mentor for any team who wants to develop a young franchise quarterback. Look no further than how Smith helped Patrick Mahomes along with the Kansas City Chiefs, and the class with which he handled that situation.

Whatever happens with Smith going forward, it speaks to his incredible competitive nature and unique mentality to even want to return to football in the first place, much less thrive in a lot of ways upon his epic comeback. Starting or not, expect Smith to at least be on an NFL roster this coming season.