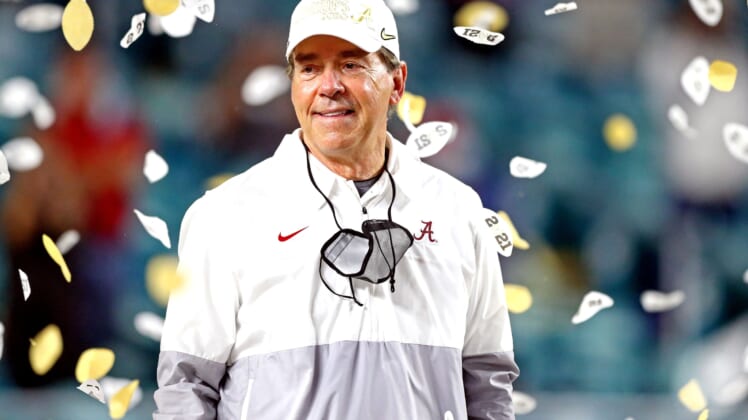 The 2020 NFL season has seen a lot of focus on TV ratings. We have not heard a whole lot about what ended up being a truncated college football season. That’s until now.

Fresh off Alabama blowing out Ohio State Monday night by the score of 52-24, we’re now getting some concrete information as it relates to viewership for the national championship. It’s not great.

According to ESPN, 18.7 million viewers tuned in to the Crimson Tide’s dominating 28-point victory over Ohio State in Miami Monday evening. That’s down nearly eight million viewers from the LSU-Clemson College Football Playoff National Championship Game a season ago.

In terms of historical ratings, it’s about as bad as it gets (in millions).

Since the BCS system started back in 1999, no national title game has had TV ratings this bad. The previous low was USC’s blowout win over Oklahoma back in 2004.

There’s certainly some factors that can play into this downtick in viewership. First off, the idea of playing college football’s biggest game on a Monday night never really made sense. For decades, it took place on New Year’s day or shortly thereafter. That has to be taken into account here.

Secondly, this year’s College Football Playoff National Championship Game took place after six NFL playoff games were played over the weekend. That’s normally not the case. However, the COVID-19 situation played a role in the title matchup being delayed.

Finally, interest in sports in general might be down some given what we’re seeing from a broader societal standpoint in the United States. The attack on Capitol Hill last Wednesday coupled with the political division we’re seeing in the country could lead to a downtick in interest when it comes to the sports world as a whole.

Either way, these are some alarming numbers for the NCAA.