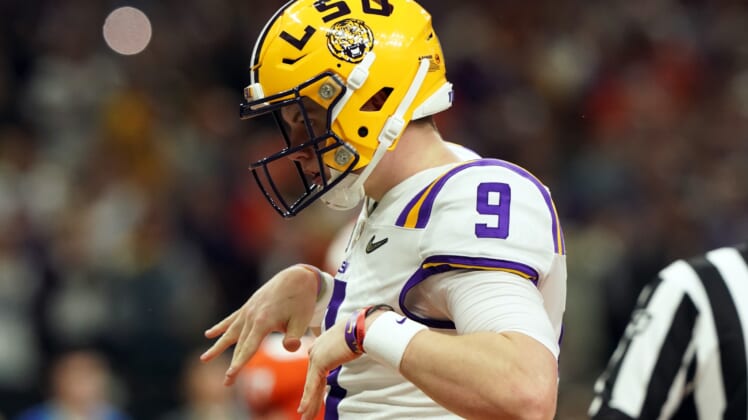 The LSU Tigers and Clemson Tigers met in the Mercedes-Benz Superdome on Monday night and delivered a CFP National Championship Game that we’ll never forget.

Clemson jumped on top early and quarterback Trevor Lawrence sent a message to LSU’s fans after the go-ahead score. After Tee Higgins plowed through an LSU defender for a 36-yard touchdown, Clemson held the early momentum in a 17-7 game.

LSU’s 21 unanswered points propelled the Tigers to a 28-17 lead at halftime. Clemson came clawing back to make it a one-score game early in the third quarter. Just as Clemson started to find new life, Burrow squashed it for good to cap off his record-breaking season in style.

Here are the winners and losers from LSU’s 42-25 victory over Clemson in the National Championship Game.

Expect anything different? The only way Burrow’s historic season could end would be with confetti falling on him and the championship trophy in his hands. Simply put, the senior’s collegiate career ended with one of his best performances ever. Burrow might have started slow, but he was unstoppable once he hit his stride in the second quarter.

Terrell came into this game recognized as one of the best cornerbacks in the country. By the time this title clash even hit halftime, the first-team All-ACC cornerback was remembered for getting burnt repeatedly by Ja’Marr Chase.

Clemson allowed Terrell to follow Chase all over the field and it backfired. The 6-foot-1 corner was beaten off the line, torched with speed and just outmatched in every way possible. As the junior ponders his future, with the NFL awaiting him, he might need to consider returning to school after this ugly showing on the biggest stage.

On a night when many of his teammates on defense struggled, Simmons put on a masterful performance as Clemson’s do-it-all linebacker. He was simply a disruptor in every aspect of the game and did everything that coaches dream of.

Simmons brought pressure off the edge, created penetration to disrupt plays in the backfield and excelled in coverage. This 6-foot-4 linebacker’s instincts and rare athleticism were on full display on the big stage and he proved why he’ll likely be a top-10 pick in the NFL Draft.

It proved to be a difficult night for top cornerbacks. While we’ve seen Fulton shut down plenty of No. 1 receivers this season, Higgins made sure that LSU’s top cornerback experienced pain and embarrassment in the national championship.

Higgins identified weaknesses in Fulton’s game and exploited them. He beat him with quickness, he outmatched him with leverage and he spun Fulton around like a top. Of course, those things on their own were tough to watch. It’s the hit Higgins delivered on his touchdown run that we’ll all remember most.

As he watched his son from the stands, Hall of Famer Randy Moss could only smile with pride at Thaddeus’ dominance. While he might be playing tight end, rather than receiver like his father, Thaddeus made a name for himself with the national spotlight upon him.

Clemson had its hands full with Chase and Justin Jefferson, so Moss took advantage. He kept finding holes underneath and dominated in the red zone, becoming Burrow’s go-to target later in the game. While his father might have a spot in Canton, Thaddeus has a championship ring.

Venables is one of the best defensive coordinators in the country, but this was one of the worst showings we’ve seen from his defense in years. While Clemson’s defense seemed to have a plan of attack early, the defensive adjustments never came once LSU’s offense made changes.

This defensive failure was about more than just mismatches. LSU offensive coordinator Steve Ensminger and pass-game coordinator Joe Brady outcoached Venables. Clemson allowed critical third-down conversions, notably on the touchdown drive before halftime. It’s rare to see it happen, but Venables was outsmarted by better coaches and it cost this team a national title.

There were multiple starting-caliber NFL receivers on the field in this game. Chase didn’t just prove he’s better than them. He demonstrated why he could become one of the NFL’s best at the position when his time comes.

When Chase hauled in his first score, a gorgeous 52-yard score, you knew the night would be special. He went into halftime with 162 yards and two scores, a line other players would love in a full game. Chase wasn’t done. He blew past the 200-yard mark in the third quarter and finished the night with 221 yards, two scores and a championship. We’re excited to see how he tries to top this as a junior next season.

A year after Lawrence humiliated Alabama and made a name for himself in Clemson’s championship win, he fell short against LSU. While the 20-year-old started hot with a touchdown run and a gesture to the fans, this game and LSU’s defense quickly humbled him.

Lawrence completed just 18-of-37 attempts, averaging a pedestrian 6.3 yards per attempt, and failed to throw a single touchdown in the game. He seemed to get rattled by the Tigers’ pass rush, missing some key throws and was even fortunate to not have an interception. Lawrence is still one of the best quarterbacks in college football, but he can kiss his place in history goodbye for the time being. Now let’s see how he learns from this experience next year.