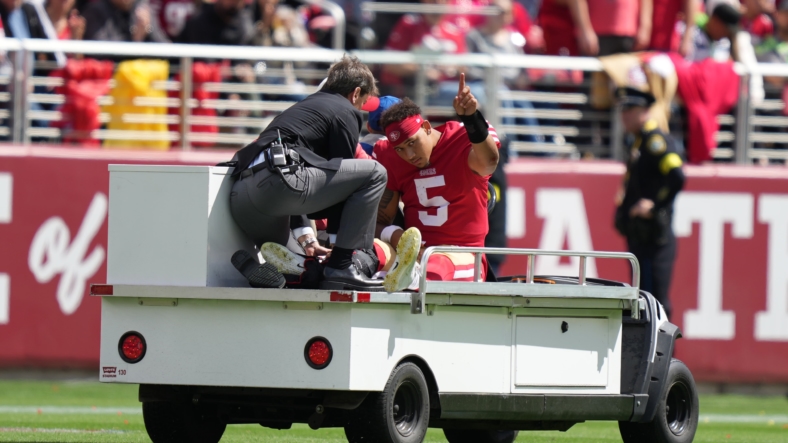 The San Francisco 49ers announced on Monday that second-year quarterback Trey Lance has undergone successful ankle surgery and should make a full recovery in time for the 2023 season.

“Surgery was performed at Stanford Hospital and repaired two injuries to Lance’s ankle, a fibula fracture and ligament disruption. Lance will start the rehab process, and head team physician Dr. Tim McAdams is confident that he will recover completely in time for a full return in the 2023 season,” the 49ers announced via their official website.

Lance, 22, suffered the injury in the first quarter of Sunday’s win over the Seattle Seahawks on a designed run call from head coach Kyle Shanahan. He attempted to get up from the turf at Levi’s Stadium before falling back to the ground. Lance was ultimately carted off the field with an air cast on his right foot. Immediately after the game, Shanahan noted that Lance would have to undergo surgery and will miss the remainder of the 2022 season.

Back in 2020, Dak Prescott suffered a compound fracture and dislocation of the right ankle. It harkened back memories to the career-ending injury then-Washington quarterback Joe Theismann suffered decades earlier. Though, medical advancements and Prescott’s desire to return to the field made for an epic comeback to start the 2021 season.

The good news for Lance and his 49ers? Lance’s injury is not of the same ilk. Rather, it’s a fibula fracture and ligament disruption. There is a difference, especially as it relates to a recovery timeline.

Retained on a restructured contract ahead of Week 1, Jimmy Garoppolo took over for Lance on Sunday. He ended up completing 13-of-21 passes for 154 yards with a touchdown en route to leading San Francisco to a blowout 27-7 win over the Seattle Seahawks.

There has to be confidence in the 49ers’ building that Garoppolo can continue his winning ways. He’s led San Francisco to two NFC Championship Games and a Super Bowl appearance in the past three seasons. Garoppolo also boasts a 31-14 record as the 49ers’ starter since being acquired from the New England Patriots midway through the 2017 season.

As for Lance, he will now have made a total of 20 starts since his high school days once the 2023 campaign comes calling. Those who witnessed the injury on Sunday feel bad for the former No. 3 pick from North Dakota State.

“It’s tough. You feel for someone so bad. It’s a sad moment, but you don’t have time to sit there and think about it. You’ve got to get right back to the game. I thought the guys did a real good job of that. We were happy about the win, but it was a little somber once you get in the locker room and you see him.”

San Francisco will now face a familar foe in Russell Wilson when it takes on the Denver Broncos on Sunday Night Football next weekend. It will be doing so with Garoppolo under center. How things come full circle.