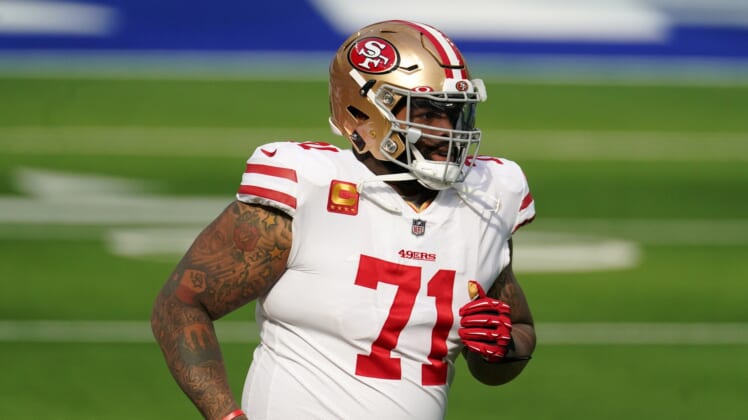 The San Francisco 49ers made sure they kept Trent Williams as their franchise left tackle, agreeing to an unprecedented contract for an offensive lineman to stay in the Bay Area.

Williams is signing on for a six-year contract that’ll pay him $138 million, which amounts to a cool $23 million per season on average.

Williams plays one of the most important positions in football, and it’s hard to argue he’s not the very best at it among active players. Well, evidently 49ers general manager John Lynch and head coach Kyle Shanahan came to the decision that Williams was worth it.

In an offseason where the NFL salary cap is down, NFL Network’s Ian Rapoport reported that the Kansas City Chiefs and Chicago Bears were nevertheless still in hot pursuit of Williams before he opted to remain with his incumbent team:

The opportunity to play in Kansas City had to be appealing to Williams, but it’s likely the Chiefs couldn’t meet his asking price after signing guard Joe Thuney to a four-year, $80 million deal already in free agency.

As for the Bears, well, they were trying to acquire Seattle Seahawks superstar Russell Wilson to be their new quarterback, only to settle for Andy Dalton yesterday. That acquisition all but took Chicago out of the running in and of itself, as the team struck out once again on another big name, and cemented Williams’ decision to be a 49er for the long haul.

After a fallout with the Washington Football Team, Williams was away from the gridiron for the entire 2019 campaign before he got traded to San Francisco, where he reunited with Shanahan, who was the offensive coordinator in D.C. at the dawn of Williams’ NFL career.

Despite that hiatus, there was no rust whatsoever on display when Williams returned this past season. All he did was rank as Pro Football Focus’ No. 1 offensive tackle. That led to the 32-year-old’s eighth Pro Bowl selection.

Now, the question becomes who Williams will be protecting for the rest of his playing days. It certainly doesn’t seem like Jimmy Garoppolo is the long-term answer under center in San Francisco. Not only has the team reportedly been doing its due diligence on other QBs, but Jimmy G has struggled to stay healthy.

That’ll be the next big domino to fall in shaping this 49ers team for the future, but for now, the fanbase can take solace in the fact that Trent Williams is coming back.