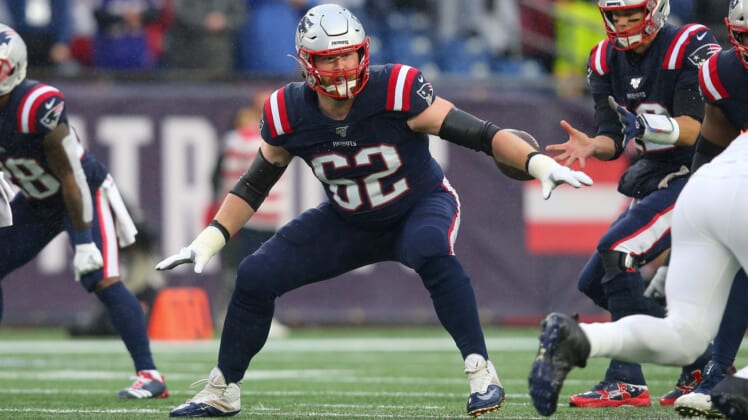 At least that’s what oddsmakers are projecting in their listings after Day 1 of the NFL’s free-agent frenzy. Thuney played in New England under the franchise tag last season, but wasn’t part of the Pats’ spending open-market spree.

Instead, the two-time reigning AFC champions scooped up Thuney to help protect Patrick Mahomes, and saw their championship odds shorten in the process.

After failing to defend the Lombardi Trophy in a 31-9 loss to the Tampa Bay Buccaneers in the Big Game, the latest Super Bowl LVI odds actually tilt in Kansas City’s favor — and dropped from 5-1 to 9-2 after Thuney signed, per SportsBetting.com:

When the Chiefs made the difficult, salary cap decision to cut starting offensive tackles Eric Fisher and Mitchell Schwartz — both of whom were set to come off major injuries — there was uncertainty as to what the team’s strategy was on the o-line.

That was especially alarming after Mahomes was running for his life on Super Bowl Sunday versus the Bucs’ pass-rushers. Adding Thuney on a five-year, $80 million contract should be a big help, yet it cost Kansas City a huge chunk of money.

Plus, thanks to some salary cap gymnastics, Tampa Bay already has most of its veteran core under contract for 2021. It’s somewhat of a surprise in that context that the Bucs didn’t see a healthy bump in their odds, or at least pulling closer to challenging the Chiefs for favorite status.

It’ll be interesting to see how Thuney fares outside of New England, as the Patriots are famous for developing high-quality linemen and are able to scheme and coach them up in a unique way seldom replicated by any other NFL team.

Thuney had the benefit of learning under legendary assistant Dante Scarnecchia, and playing alongside tons of talented players. Notably, Thuney was arguably not even the best guard on his own team with the Patriots. That honor could be bestowed upon Shaq Mason instead.

Let’s not take anything away from Thuney, though. He’s earned his huge payday, and talk about a favorable situation to walk into. After blocking for the GOAT quarterback Tom Brady, who’s now in Tampa Bay, Thuney will be part of the Chiefs’ efforts to dethrone Tom Terrific and the reigning champion Bucs.

Oddsmakers might be missing the bigger picture on offense that even an exceptional interior lineman like Thuney can’t fix on his own.

With Mahomes, Travis Kelce and Tyreek Hill, Kansas City still has an electrifying trio to spark its passing attack. That said, there’s still no visible solution as to who the new, viable starting offensive tackles will be. Also worth highlighting is the fact that Sammy Watkins, Byron Pringle and Demarcus Robinson are all free agents.

Those three wideouts aren’t really household names, and Watkins has largely failed to live up to his billing as a top draft pick. Nevertheless, the Chiefs may not have the cap room to retain that depth to their receiving corps, which could have a detrimental impact on the offense regardless of how brilliantly Mahomes plays.

There will still be a need for more balance to complement Mahomes and the Chiefs’ aerial attack, too. Tailback Clyde Edwards-Helaire will hopefully take off in his sophomore campaign. Thuney is more of a pass protecting specialist than a mauling run blocker, though, so that area is something else general manager Brett Veach must consider in building out this roster.

The 2021 NFL Draft will go a long way in determining how adequately KC can address its offensive personnel issues. Of course, having such high-end ability with Mahomes, Kelce and Hill helps the cause a lot, yet there are some key ingredients that still need to be mixed in to ensure the Chiefs keep operating like a well-oiled, touchdown-making machine.

Look for Kansas City to target offensive tackle early in the first couple rounds of the draft, with a focus later on bringing a rookie pass-catcher aboard to develop and hopefully contribute early on.