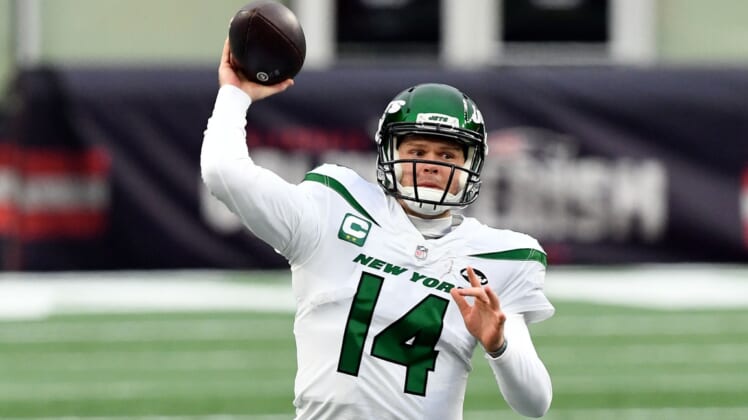 The San Francisco 49ers entered the offseason facing a pivotal decision at quarterback. Either they committed to Jimmy Garoppolo or they swung a deal to land his replacement via trade or the 2021 NFL Draft. While it’s early in the spring, it seems another potential target could be ruled out.

If Kyle Shanahan could land any player from the 2021 quarterback carousel, it would be Deshaun Watson. The 25-year-old star would inject new life into this quarterback-friendly scheme, competing for NFL MVP and helping the 49ers compete for the Super Bowl. Unfortunately, with the Houston Texans refusing to even listen to trade, a blockbuster deal is unlikely.

With stars like Watson and Russell Wilson off the table, focus shifts to the secondary options. San Francisco struck out on Matthew Stafford and never really wanted Carson Wentz. Instead, the organization has been connected to the likes of Sam Darnold and Teddy Bridgewater.

Unfortunately, for fans hoping the team would upgrade over Garoppolo, the chances of that happening seem to be dwindling.

The 49ers have been tied heavily to Darnold, the former No. 3 overall pick. For a team looking to buy low on a quarterback, especially one who fits into the team’s salary cap limitations, maximizing value was essential. That’s why acquiring Darnold from the Jets, who seem to have a quarterback in mind with the No. 2 selection, seemed fitting.

NFL Network’s Ian Rapoport threw cold water on the speculation this week. In an interview on the Murph and Mac Podcast (H/T Bleacher Report), one of the league’s top insiders said he doesn’t anticipate Darnold being traded to San Francisco,

The belief does track with some other recent reports out of San Francisco. In February, word broke that the 49ers would only trade Garoppolo if they landed a star quarterback. If that doesn’t happen, Shanahan is comfortable rolling with the player who knows his system and helped this team reach Super Bowl LIV.

There would also be a ripple effect to the 49ers standing pat at quarterback. Even after the New England Patriots signed Cam Newton to an incentive-heavy contract, Bill Belichick still loves Garoppolo and views him as a priority. But if the 29-year-old passer isn’t being released or traded, the Patriots have no shot at him.

Passing on Darnold, who comes with a high asking price, doesn’t rule out San Francisco bringing in competition for Garoppolo. The 49ers could draft a player like Trey Lance or Mac Jones with their first-round pick, even a deal for Bridgewater makes some sends.

For now, fans should expect Garoppolo to be under center in Week 1 next season. It’s not the outcome many hoped for, but this team has shown it can go far with its current quarterback.