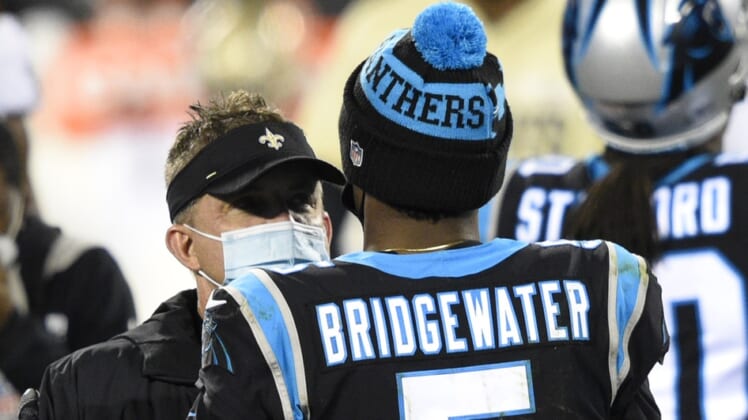 We’ve read the San Francisco 49ers rumors linking this team to pretty much every quarterback available on the NFL free agent and trade markets.

San Francisco was in on Matthew Stafford before he was dealt from the Detroit Lions to the Los Angeles Rams. It is also considered one of the priority landing spots for disgruntled Houston Texans star Deshaun Watson and has been linked to New York Jets signal caller Sam Darnold.

Previously, this seemed to suggest that the 49ers were looking to upgrade from Jimmy Garoppolo under center. This talk continues despite 49ers general manager John Lynch indicating that he firmly believes Garoppolo will be San Francisco’s Week 1 starter.

Instead of looking to pull off a blockbuster, the 49ers might very well opt to find an insurance policy behind Garoppolo. According to a new report, that could include Teddy Bridgewater.

“San Francisco is among the teams that have called Carolina to gauge the Panthers’ interest in potentially trading Bridgewater, according to league sources,” Joseph Person of The Athletic reported Monday. “San Francisco general manager John Lynch indicated last week the 49ers would like to find a solid backup as insurance for oft-injured starter Jimmy Garoppolo.”

A lot would have to come to fruition in order for Bridgewater to land in the Bay Area as Garoppolo’s backup. In fact, it seems to be a pie-in-the-sky thought right now.

First off, the former Minnesota Vikings’ first-round pick would count about $17 million against the 2021 NFL salary cap for any team that decides to trade for him. With north of 40 impending free agents, the 49ers are currently an estimated $11.86 million under the cap. It makes no sense to pay out that type of cash to a backup.

These most-recent 49ers rumors could very well suggest that Bridgewater would be brought in to replace Garoppolo, not back up the incumbent starter. Whether San Francisco’s brass believed Bridgewater would be an upgrade over Garoppolo remains to be see. Objectively, that seems to be a stretch.

The other major point here is Carolina’s quarterback situation. The team isn’t going to trade Bridgewater without having already found a legit upgrade.

The Panthers were in on Matthew Stafford and are among the teams bandied about the most when it comes to Deshaun Watson. Carolina owner David Tepper has been leading the charge for Watson. Should that come to fruition, flipping Bridgewater to San Francisco could make sense.

Regardless of whether San Francisco retains Jimmy Garoppolo, it seems to be a foregone conclusion that the team will be acquiring a veteran option for the quarterback room.

Suggestions are that the team might have already prepared an offer for Deshaun Watson. The 49ers are also being linked to Sam Darnold. Those are two vastly different situations in that Darnold might not even be considered an upgrade over Garoppolo.

Short of the 49ers adding Watson, the likeliest scenario here is that they use free agency or the trade market to acquire a top backup. Andy Dalton, Jameis Winston, Ryan Fitzpatrick and Cam Newton have all been talked about at length.

Perhaps, making a move for Bridgewater could enable San Francisco to save money against the cap by moving off Garoppolo and finding a quarterback in the 2021 NFL Draft. Either way, this is a major storyline to follow with the 2021 NFL offseason heating up.