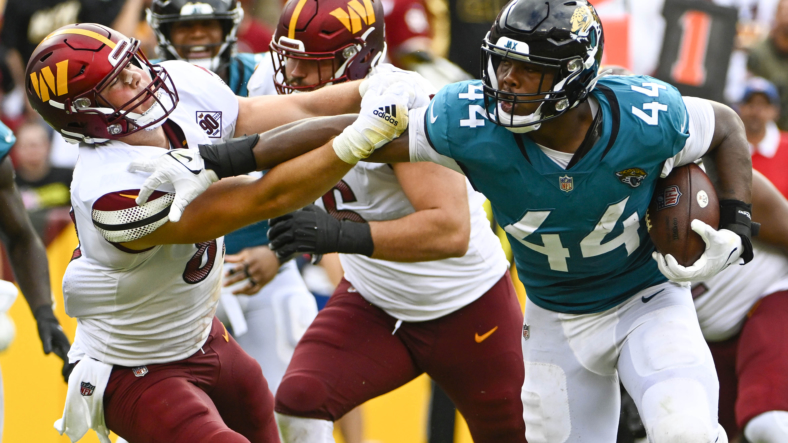 There was a lot of intrigue leading up to the 2022 NFL Draft back in April. Some seasons, we know the identity of the expected No. 1 overall pick well ahead of the selection process. Not this year. Eventually, Georgia’s Travon Walker emerged as the top pick, but it didn’t come without criticism.

Some felt his late meteoric rise to the top was the product of a strong combine and pro day. Basically, not from his actual tape or production on the field, which included 9.5 sacks across three seasons for one of, if not the best defense in college football. Yet, others, like the Jaguars, clearly felt otherwise.

Well, in Week 1, taking on the Washington Commanders in Walker’s NFL debut, he got a chance to show the doubters what he’s made of. It didn’t take long for the 21-year-old to make an immediate impression, not only on his teammates, but also the Duval fanbase.

Walker was simply magnificent, making two big plays that Jaguars fans will be replaying on a loop until next Sunday.

In the first clip, we see Walker use his raw strength and quickness yet all while displaying an ability to beat his man with leverage as he blew past Washington’s starting right tackle Sam Cosmi.

As awesome as it is to see Walker getting sacks like he was drafted to do, especially in his first game, it was the second play that should have Jaguars fans even more excited. Here Walker comes out of nowhere to snatch a Carson Wentz screen pass intended for Antonio Gibson for the interception. For a rookie to have his head on a swivel like that is insane. He’s beyond his years.

No one ever really knows what to expect out of rookies before they’ve hit the field. There’s always a big adjustment, going from the college ranks to the pros. In Walker’s case, he seems to be getting acclimated just fine.

If Walker can continue anything close to his season-opening effort, the AFC South could be in trouble. With Walker and Pro Bowler Josh Allen rushing off the edge, the Jags defense could take a huge step forward in 2022.

For now, he’s off to a strong start in his Rookie of the Year campaign, but he might even be able to aim higher, like Defensive Player of the Year in the near future. We won’t rush to those conclusions just yet, it’s just one game, but so far, so good for the former Bulldog.