The first two matchups on this year’s Thanksgiving schedule have wide-ranging playoff ramifications.

It starts with the Detroit Lions looking to pull within one game of the red-hot Minnesota Vikings in the NFC North. Just how dominant can the Vikings’ elite defense be in this one?

Later on Thanksgiving, the Dallas Cowboys will attempt to right the ship following a two-game losing streak without their star running back. Can Dak Prescott actually step up like most expected him to?

And in the night game, two bottom-feeding NFC East teams with serious injury concerns attempt to get answers about their quarterback situations. These are among the top storylines for NFL Thanksgiving Day.

Cowboys look to salvage their season

At 5-5 and in the midst of a two-game losing streak, the Dallas Cowboys are on the verge of becoming irrelevant in the NFC Playoff race. Four games behind Philadelphia after last week’s blowout loss to the Eagles, that’s already the case in the NFC East.

One really has to wonder where this team goes from here. It’s a squad that had Super Bowl expectations heading into the season. And now, the holes on both sides of the ball are vast.

Ezekiel Elliott will sit out the next four games, after which point it’s unlikely Dallas will even be in playoff contention. Tyron Smith is banged up. And fellow All-Pro, linebacker Sean Lee, is in the midst of a multi-game absence.

Thanksgiving’s game against a four-win Chargers squad would normally be a gimme for Dallas. That’s until we realize Los Angeles has won four of its past six since a 0-4 start to the season. The matchups here seem to favor the road team. And if that holds true to form, the Cowboys can pretty much kiss any hopes of the playoffs goodbye. 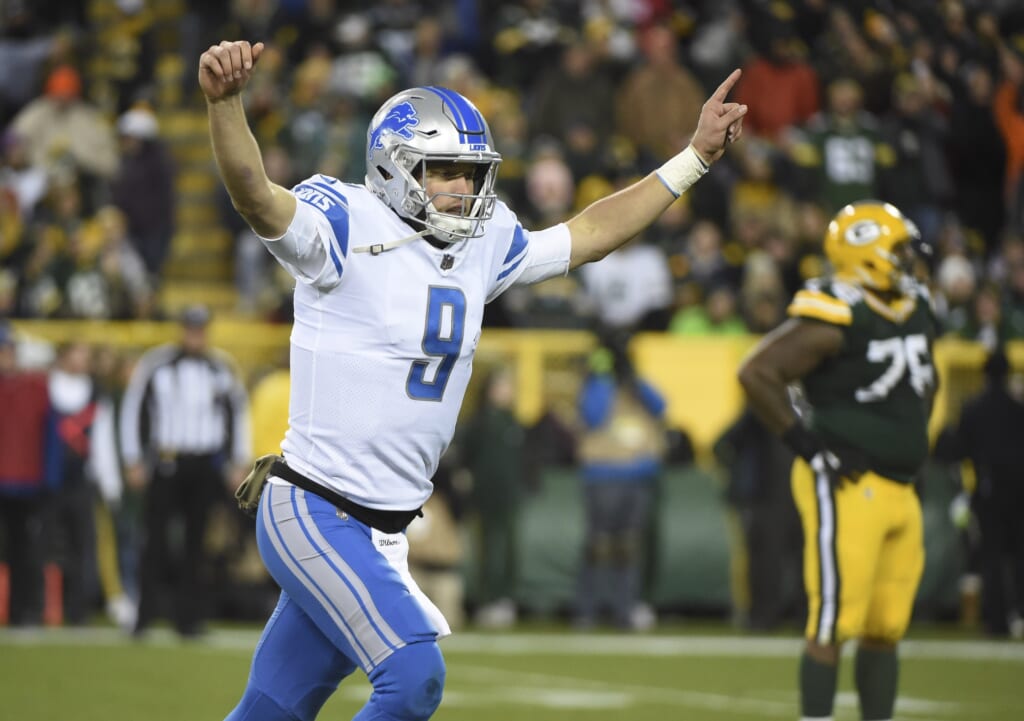 Surprisingly, the Detroit Lions find themselves just two games behind a red-hot Vikings team in the division. Despite this, no objective person will conclude these two teams are even remotely close to one another.

On the other hand, Minnesota has won six consecutive games by an average of nearly 11 points per outing.

The beauty of this is that style points don’t matter in the NFL. You can win by 17 points against a first-place team or come out on top by three points against a last-place squad, and the end result is all the same. Matthew Stafford has performed well when it matters the most for Detroit. And now heading into Thanksgiving, the Lions are one statement win away from making it a race in the NFC North. Imagine that.

Kirk Cousins has had to work his magic with less-than-desirable offensive weapons throughout the 2017 season. For the first time, that really came home to roost last week during a late-game meltdown against the New Orleans Saints. Washington blew a 15-point lead with less than seven minutes remaining in the game, ultimately leading to an overtime loss and a 4-6 record on the season.

Unfortunately for Washington, that’s not the extent of the bad news here. Starting running back Chris Thompson went down Sunday with a fractured right fibula. He’s lost for the season. Wide receiver and prized free agent acquisition Terrelle Pryor is also out for the season, as are two starting offensive linemen. That’s just a whole lot of bad news.

Short of Washington winning five or six games to close out the season, it will not come close to vying for a playoff spot. Instead, the remainder of the season will be spent evaluating an impending free agent in Kirk Cousins that legitimately has one of the weakest supporting casts in the NFL. That starts Thursday against the last-place New York Giants.

Can the Chargers actually compete in the AFC West? 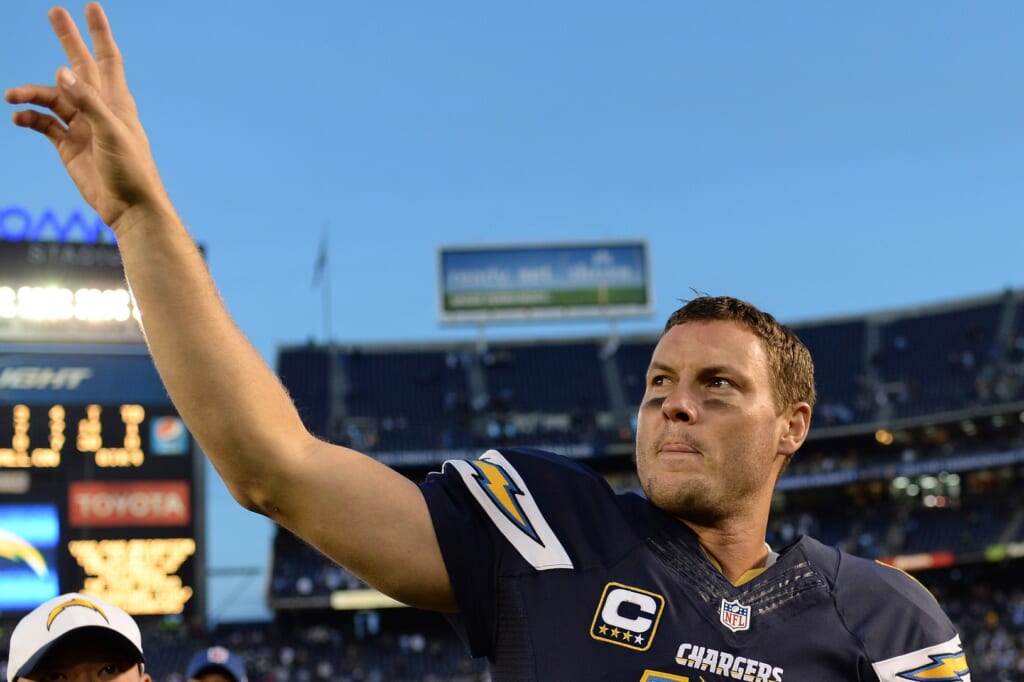 It sounds crazy to think about, but first-year Chargers head coach Anthony Lynn actually has his team in contention heading into Thanksgiving weekend. By virtue of winning four of their past six games and watching the first-place Chiefs lose four of their past five, the Chargers are just two back in the AFC West.

It’s also important to note here that only one of Los Angeles’ final six games are against teams currently with a winning record. That comes on the road in Kansas City in Week 15. Needless to say, the Chargers could very well end up controlling their own destiny in the division moving forward.

In order to continue with the good vibes that came following a 54-24 drubbing of the Bills last week, Los Angeles has to take care of business on the road against a struggling Cowboys team.

If we had told you the Vikings would be 8-2 after they lost their entire starting backfield in the first three weeks of the season, you would’ve called us crazy. But here we are. Minnesota has won six consecutive games heading into its Thanksgiving matchup against the Lions. It’s also coming off a 24-7 beat down of the previously red-hot Los Angeles Rams.

The likes of Case Keenum, Latavius Murray and Adam Thielen have all stepped up on the offensive side of the ball this season. But it really is all about this team’s ultra-talented defense.

Led by Everson Griffen and young standout Danielle Hunter, Minnesota heads into Week 12 ranked in the top 10 of the NFL in sacks. It’s also yielding an absurdly low 80.7 passer rating and ranks second in the league against the run. That’s utter domination.

Should it continue Thursday against Matthew Stafford and the Lions, Minnesota will be well on its way to a seventh consecutive win, pretty much putting the NFC North to rest in the process.

Can the Giants build off last week’s performance? 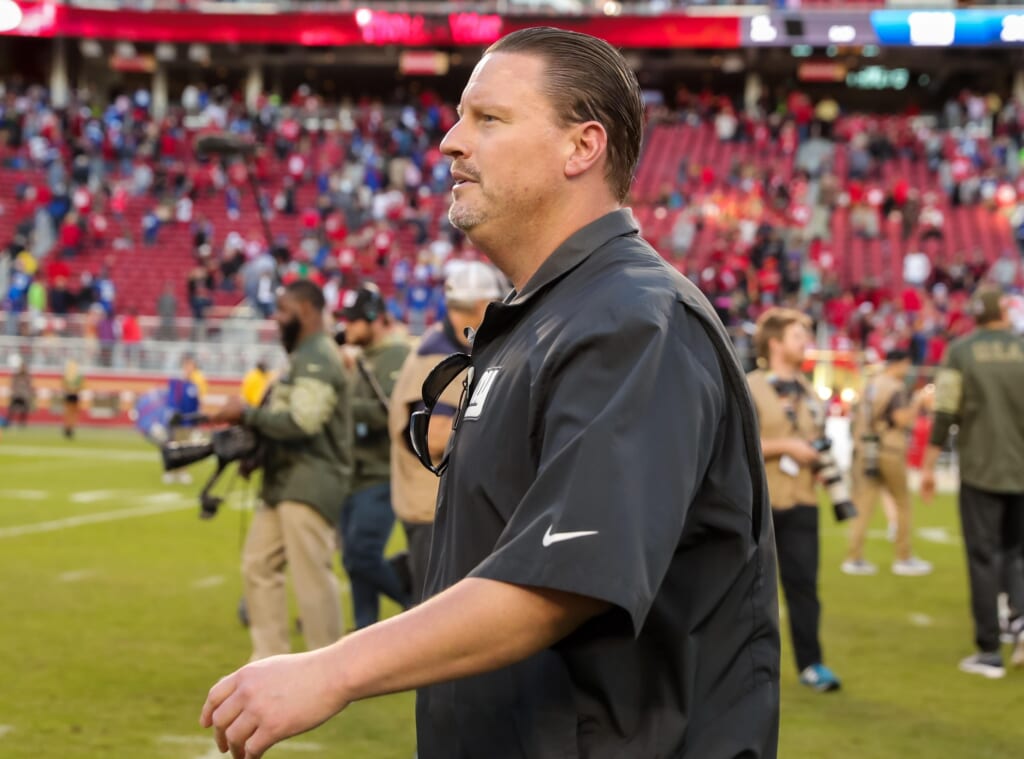 It won’t really matter in the grand scheme of things. New York finds itself at 2-8 on the season and playing for nothing more than draft positioning. But Ben McAdoo and Co. did show up for the first time in what seems like ages in what was a shocking win over the Kansas City Chiefs last week. It’s like the team actually played football for its head coach or something.

We can likely expect much of the same Thanksgiving night against Washington. No team wants to be embarrassed on national television. That’s magnified further when we’re taking about a nationally televised prime-time game against a division rival on a holiday.

At this point, it seems to be a foregone conclusion that McAdoo will be fired after the season. But with a strong showing over the final six games, just maybe he’ll give the Giants’ brass something to think about.

To say that this second-year quarterback has struggled mightily without Elliott would be a major understatement. In two games without the suspended running back, Prescott has put up zero touchdowns compared to three interceptions and is averaging 170 passing yards per game. Dallas has scored a grand total of 16 points during this span.

The Cowboys simply can’t wait until Elliott returns from suspension in Week 16 to get this thing together. Realistically, this team likely needs to win three of its final four without Elliott to remain in the playoff race.

That starts Thanksgiving against a Chargers defense that boasts the best pass-rushing tandem in the NFL, Joey Bosa and Melvin Ingram. This very same defense ranks in the top eight of the NFL against the pass and has yielded a sub 79 quarterback rating on the season.

Just how good is Case Keenum? 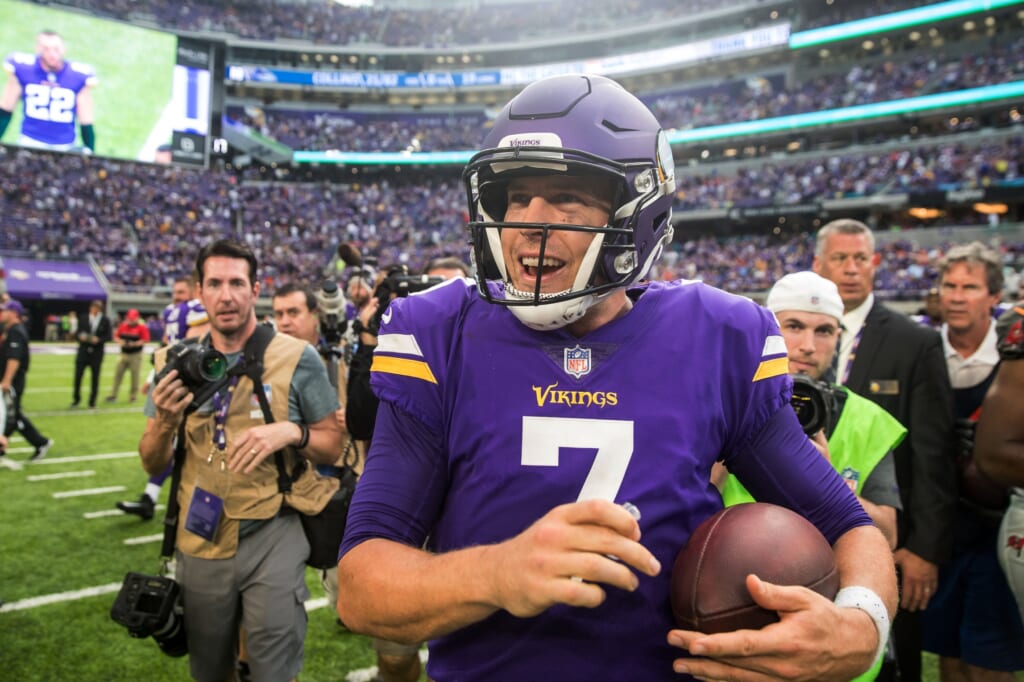 As long as Keenum continues to lead his Vikings to wins and performs at the level we’ve seen the past month-plus, Teddy Bridgewater will remain sidelined in Minnesota. It’s simply shocking what we’ve seen from this career backup, as he morphs from game manager into being a key component in a vastly improved passing game.

We continue to say it’s not sustainable after how Keenum performed with the Los Angeles Rams last season. Though, that’s likely more of a representation of just how bad Jeff Fisher was as the Rams’ head coach.

Over the course of the past three games, Keenum has completed 68 percent of his passes for nearly 900 yards with seven touchdowns and three interceptions. He’s leading the Vikings to an average of nearly 33 points per game during that span. The answer to the question posed here is that Keenum is good. He has his Vikings at 8-2. And as long as he continues to play like this, the veteran has to be considered a starter-caliber quarterback in the NFL. Period.

We’re not too sure how the entire Giants dynamic will play out during the offseason. Head coach Ben McAdoo will likely be fired. Outside of that, it would simply be conjecture on our part.

What we do know is that the Giants’ brass is anticipating sweeping changes from a personnel standpoint. That could include the firing of general manager Jerry Reese, among other moves in the front office.

It could also include the team completely moving on from future Hall of Fame quarterback Eli Manning. We all heard rumors about the two-time Super Bowl winner being dealt during October’s trade deadline. While that never came to fruition, there has to be some internal thought in New York that a wholesale rebuild of one of the worst offenses in the NFL could be in the cards.

Thursday’s game against Washington won’t do much to dispel the notion that Eli might not be long in New York. But it could potentially be his final nationally televised appearance as a member of the Giants. That’s a story.