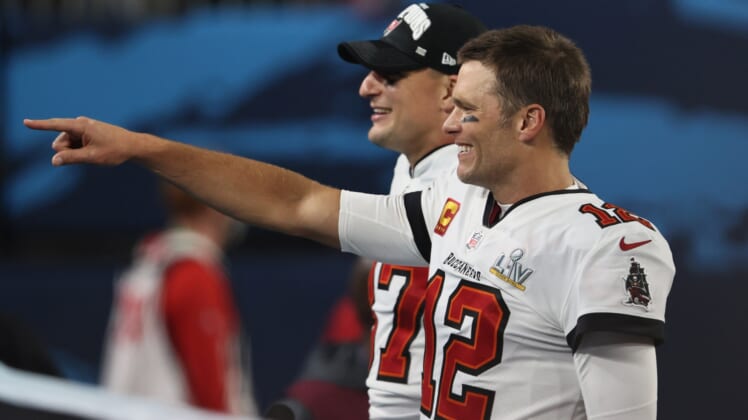 Tom Brady is still celebrating his seventh Super Bowl, but the future Hall of Famer is also thinking about the next one. Ahead of a busy 2021 offseason for the Tampa Bay Buccaneers, with the team in a great position to retain its core players, Brady might have his eyes on Odell Beckham Jr.

Brady chose the Buccaneers for the opportunity to team up with Mike Evans and Chris Godwin. Soon after his arrival, Tampa Bay traded for Rob Gronkowski and later signed Antonio Brown. Several NFL stars have hinted at a desire to join Brady in Tampa Bay and it seems there might be mutual interest between the star quarterback and OBJ.

ESPN’s Jeff Darlington shared on Get Up! that Tom Brady and Odell Beckham Jr. would like to play together at some point. While Brady didn’t pitch the Buccaneers on acquiring the star receiver last offseason, there remains mutual interest in a partnership due to their familiarity with one another.

There was already speculation that the Browns could trade OBJ this offseason. Still making a recovery from a torn ACL, Cleveland could erase $15.7 million off of its 2021 NFL salary cap by releasing the 28-year-old receiver or trading him. The Browns likely wouldn’t net a high draft pick in return, but the financial flexibility could be used to address other needs on the roster.

When healthy, Beckham Jr. is still an explosive player. He has battled injuries the past two seasons, but showed flashes of his old self before tearing his ACL in 2020. Upon making a full recovery, he can still be in the prime of his career. Pairing his skills with Brady in Tampa Bay’s scheme would make this offense even more unstoppable.

While Brady might love for this to happen, it seems unlikely based on the team’s current offseason plans. The Buccaneers are focused on re-signing Chris Godwin, who will likely land a massive contract this offseason. Additionally, there is mutual interest in a reunion with Antonio Brown. Plus, defensive starters Shaquil Barrett and Lavonte David are free agents this spring.

Brady and Beckham Jr. might have to wait until 2022, at the earliest, to become teammates. The Buccaneers have too many other priorities to emphasize over a luxury piece and the Browns seem intent on keeping OBJ.