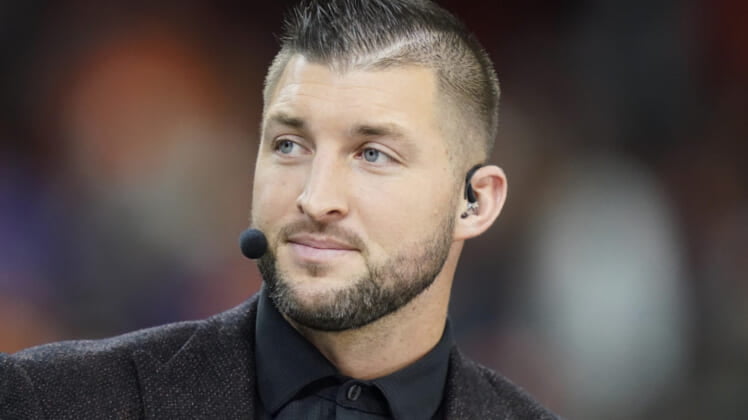 Tim Tebow and Urban Meyer will soon be reunited again in Florida and not just in the NFL. Months after Meyer agreed to become the Jacksonville Jaguars head coach, Meyer will soon be living quite close to his former star quarterback and close friend.

Meyer, who coached Tebow from 2006-’09 with the Florida Gators, will soon be completing his move to Jacksonville. After nearly two decades of coaching at the collegiate level, the 56-year-old is taking his skills to the NFL. With training camp just around the corner, Meyer recently purchased a new home in Florida.

Accord to the Jacksonville Daily Record, Meyer recently purchased a $2.15 million mansion in the gated Glen Kernan Golf & Country Club in Jacksonville. It’s a 5,785-square-foot home that has five bedrooms, fourth bathrooms and three stories. It’s got some great features, including an elevator, heated pool, a game room and multiple kitchens. But there’s also a unique plus about the neighborhood.

Meyer will be living just three doors down from Tebow, who purchased a $2.99 million home in 2019. The former Heisman Trophy winner’s mansion has five bedrooms, a wine room, home theater, a saltwater pool, a five-car garage and additional amenities outside and inside the structure.

Tebow, age 33, recently retired from baseball after a five-year stint with the New York Mets. While he faced long odds, given the late start to his pro baseball career, he eventually made it to Triple-A Syracuse and was in consideration for a spot on the Mets’ roster last season.

There was no MiLB season in 2020 due to the COVID-19 pandemic, derailing Tebow’s last hope of furthering his baseball career. While he received a spring training invite earlier this year, he ultimately decided to walk away.

Will Tim Tebow play for the Jaguars?

With baseball behind him, Tebow is considering a return to the NFL and it could be with the Jaguars. Tebow is reportedly working out as a tight end, making the switch to a position some in the NFL considered ideal to prolong his career. At 6-foot-3, he still has the size and maybe the athleticism for the position.

It remains to be seen if the Jaguars will actually sign Tebow, the odds certainly aren’t in his favor. But he can always walk down the street to make his pitch to Meyer and maybe even invite Trevor Lawrence over for a few workouts in front of Meyer’s house.